Good Sam is a kindhearted movie that anyone can enjoy 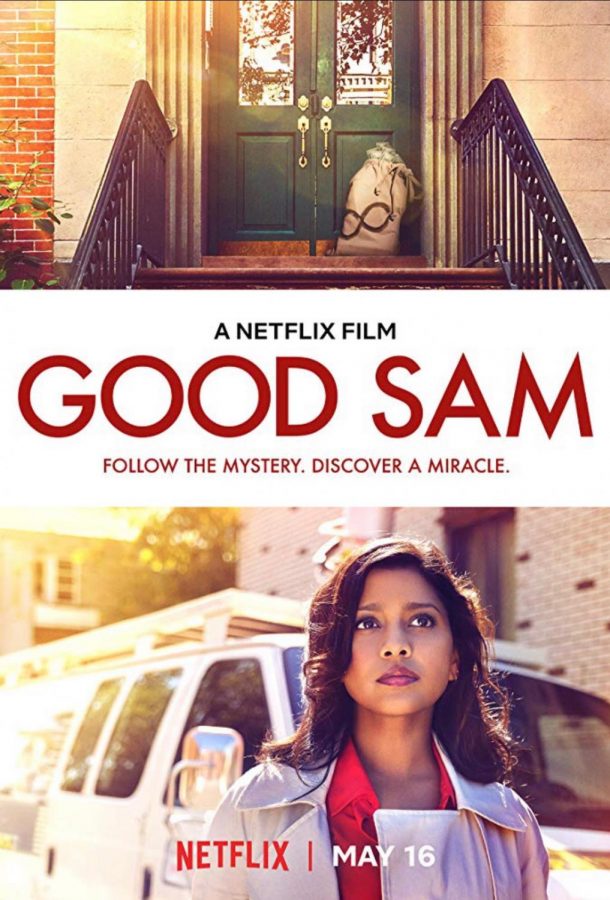 These are the things I thought of when I first came across the movie Good Sam. After reading the description, I believed I was in for yet another unoriginal storyline that several of the Netflix originals abide by; however, the heartwarming film proved all of my presumptions to be false.

The movie is based on a news reporter who is used to reporting the adrenaline-rush, exciting news that involves taking risks. However, the risks she takes to get the best news lands her in trouble with the channel, and she is coerced onto a less enthralling story: someone is anonymously leaving bags of one-hundred thousand dollars on the doorsteps of the people of New York.

While she heads into the case with a negative outlook, she eventually emerges with a story that she can’t stop thinking about. Why would someone leave these bags of money on people’s doorsteps? What was their motive? What did they want? These questions leave Kate Bradley (Tiya Sircar), the reporter, restless until she uncovered the obscured mystery.

The audience meets a great series of people as we follow along Kate’s journey. We are introduced to Eric Hayes (Chad Connell), the enigmatic firefighter who Kate first encounters while chasing a burning-building story. There is also Jack Hansen (Marco Grazzini), Kate’s father’s politician pal; Josh (Jesse Camacho), Kate’s filmer and best friend; David Dyal (Mark Camacho), Kate’s boss who ends up being a motivating challenger; and, the people who receive the anonymous one-hundred thousand dollars.

My original belief was that the movie was going to consist of a bunch of unoriginal pieces presenting an overall basic, adequate picture. My final thoughts ended up being almost the polar opposite. Yes, there were a few cliche movie moments, but I wound up being completely absorbed throughout nearly the entire movie; I genuinely enjoyed the story that the screen was reading to me.

One of the leading components that made Good Sam a satisfactory, enjoyable movie was the actors’ ability to connect to one another.

Acting as a reporter, Tiya Sircar (Kate) was put in a position where she must have that ability to connect with whomever she is acting with; she had no wiggle room for lethargic moments— she had to remain on throughout the whole movie. Sircar was faced with a challenging role, but she most definitely delivered. I saw Kate as a real reporter; I felt the connections she forged with people. I was able to believe the story that Sircar was trying to tell through her character; I was able to fall into the plot through the reality and strong appeal of her acting.

For once, I would say that almost all of the actors in this movie delivered on their parts. They were all, mostly, able to bring their characters to life and leave me very few critiques, which is highly unusual. Their overall ability to build and share the story with the audience made the movie have a powerful impact that kept me entangled in the movie.

Another one of the film’s most intriguing aspects was the many lessons interwoven throughout it. At the beginning of the movie, Kate finds herself believing that there is no way someone would just leave the money for no reason; they had to want something out of it. However, the movie then carries her on a journey where she finds that people like that –good, selfless people — really do exist. She has been reporting so much of the bad that happens, but she realizes that there is so much more good to share with the world. The original mystery brings her to discover a miracle she never knew existed.

The movie caught me up in this kindhearted atmosphere that everyone can always use more of. The movie explores this idea of completing a generous act selflessly and zooms in on the idea of compassion in the things we do. It presents an idea that genuinely will make you think. The questions it constantly raised and followed was what that kept my interest at its peak. The seemingly simple storyline ended up having so much to say.

The hour and a half I spent watching Good Sam was probably the most enjoyable section of my day. I haven’t watched a heartwarming, gratifying movie like this one in a long time. It is one of those movies that leaves you happy and leaves you in a better place than before you watched it. It was like a Hallmark movie with an alluring storyline that kept me content and on my toes.

With a healthy mix of all aspects that make a good movie, Good Sam ended up being one of the best productions I have seen in a while.