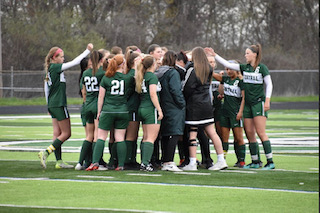 A lockdown defensive effort, especially in the first half, against a very athletic Grand Haven team was the momentum that FHC needed as the girls varsity soccer team defeated the Buccaneers 4-2. The back line, which included sophomores Autumn Burns, Whitney Currie, junior Ally Francisco, and senior Chloe Grooters led the charge defensively. When Grand Haven looked like they were about to easily score, one of these four showed up and made a huge play to stop to Buccaneers’ momentum.

“Going into the game, we knew this team would be good,” Chloe said. “We had to communicate and make sure everything was organized and everyone was marking who they were supposed to.“

As good as the defense was, the offense performed just as well. FHC dominated the possessions in the opening minutes, giving room for some early offense and setting the tone for the first half in general. After some close calls and a tough bounce off the post, sophomore Elisha Strawser broke the ice and scored an absolute rocket of a goal to put the Lady Rangers up 1-0. Later in the half, senior Kaitlyn Piontkowsky would put in another goal to put FHC up by 2 goals and set the tone early offensively.

Sophomore Addi Tack would score her first varsity goal just 2 minutes later, as the Lady Rangers started to open up the lead on Grand Haven after going up 3-0. An unsung hero in the early offense was senior midfielder Grace Kline, as she had 2 fantastic assists that created wide open goals. For Grace, passing was a key emphasis from the moment the game started.

“We had to connect more passes to create more opportunities [on offense], switch the point of attack, and tire out the other team,” Grace said. “We also did a great job at finishing chances that we did get on offense.”

Junior Jordan Helmbrecht would put in the eventual final goal of the game for FHC with a beaming goal to put the Lady Rangers up 4-0. Grand Haven put in a goal themselves shortly before the halftime buzzer to cut the lead to 4-1, but FHC went into halftime with a very confident 4-1 lead.

The Buccaneers drew blood first in a defensive second half, scoring a goal with 24 minutes left in the game and cutting the Lady Ranger lead to 4-2.  Despite the momentum shifting towards the Buccaneers in the second half, the defense stood strong and made some big plays to shut the door on Grand Haven and take home a huge win 4-2.

“Grand Haven really took it to us in the second half,” Head coach Ashley Ludtke said. “Luckily, our offense capitalized on our scoring opportunities early. I’m proud of how our entire team took on some defensive opportunities and adjustments to really rally together and pull out the win.”

With a win Tuesday night, FHC moves to 20-2 overall. The next challenge the Lady Rangers will face will be the Midland Chemics, who previously defeated Portage Central 1-1 in penalty kicks after remaining tied through extra time. FHC will need to bring energy and be able to make smart decisions in order to advance to its second state semifinal in three years.

“We have established tasks for the whole team and individual lines to carry out every game,” Ludtke said. “These are expectations that we have seen the impacts and importance for them throughout the season. We refer to these tasks as our Ranger Rules. We need to be responsible for and execute these team habits to win a battle on Thursday.”