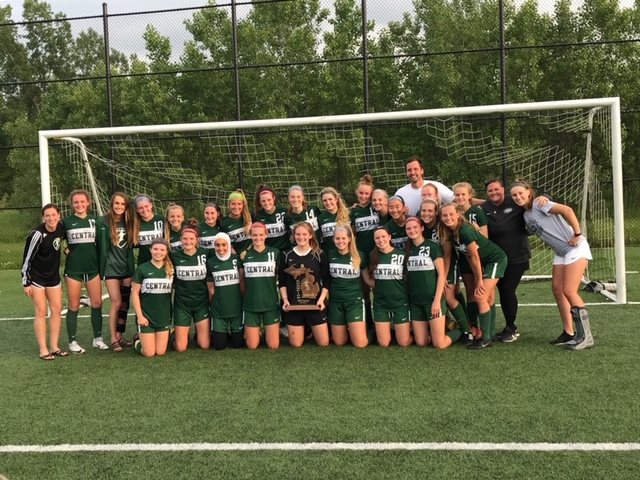 Freshman Lauren Koznesasz scored the biggest goal of the season for the girls varsity soccer team with six minutes left in the game in the Regional final against the Midland Chemics. Off of a cross pass from junior Ally Francisco, Lauren finished with her other leg to score and give FHC the cushion they needed to win the Regional title 2-0. For the freshman, this goal took all the concentration in the world to make sure everything was going right.

“When I saw the goal going in the net, it almost felt like slow motion,” Lauren said. “I was just making sure that I was doing everything right to get the goal. All that was going through my mind was that I need the ball to go in the net for my team to win the [Regional] title.”

The Midland defense was quite possibly the best defense the Lady Rangers have faced all season, but FHC was able to dominate offensively throughout the first half despite no goals being scored. The midfield of senior Grace Kline, sophomore Gwen Henderson, and Elisha did a great job connecting passes, especially against some solid Chemic defenders. This opened up opportunities for Lauren as well as senior Ashley Ward to get many opportunities at the net in the middle of the first half.

As good as the Midland defense had played throughout the game, the Lady Ranger defense played great as well. Ally and sophomore Whitney Currie were in charge of marking the Chemics’ two best forwards and limited how much they got the ball.

“[We] knew Midland was a very talented team being ranked top 10 in the state,” Ally said. “So we had to have more tenacity and hard work to pull off the win, and I think that showed in the final score.”

The second half, for the most part, was quite the defensive game itself. The Lady Rangers continued to get more opportunities at the net and get comfortable with the Chemic defense. The game completely changed when Lauren Koczenasz scored with her opposite leg and broke the ice to give the Lady Rangers the 1-0 lead.

Just two minutes after Lauren’s goal, sophomore Elisha Strawser placed a beautiful corner kick to senior Kaitlyn Piontkowsky who would ice the game with a header over the Midland goalie and eventually win FHC the game 2-0. For Kaitlyn and the rest of the Lady Ranger offense, it was a relieving feeling to score the dagger goal.

“I was kind of beating myself up over missing two really good opportunities, so I’m really glad I was able to revive myself in a way,” Kaitlyn said. “I can’t really describe [scoring the goal]. I felt a lot of relief because being up 2-0 with two minutes left is a very good position to be in, rather than only 1-0.”

The win against Midland, who is number 4 team in the state, puts FHC at 21-2 overall. The Lady Rangers now face their biggest challenge of the season to date, as they now take on the 28th in the nation Novi Wildcats in the State Semifinals.

For head coach Ashley Ludtke, taking this group to the State semifinals is different than taking any other team.

“This team has a very special bond,” Ludtke said. “They are a very inclusive bunch of girls. It’s difficult to identify who actually has tighter friendships outside of soccer with each other because they all mesh so well. They are really a group of girls that value each other’s talents and appreciate what each person bring to the team.”