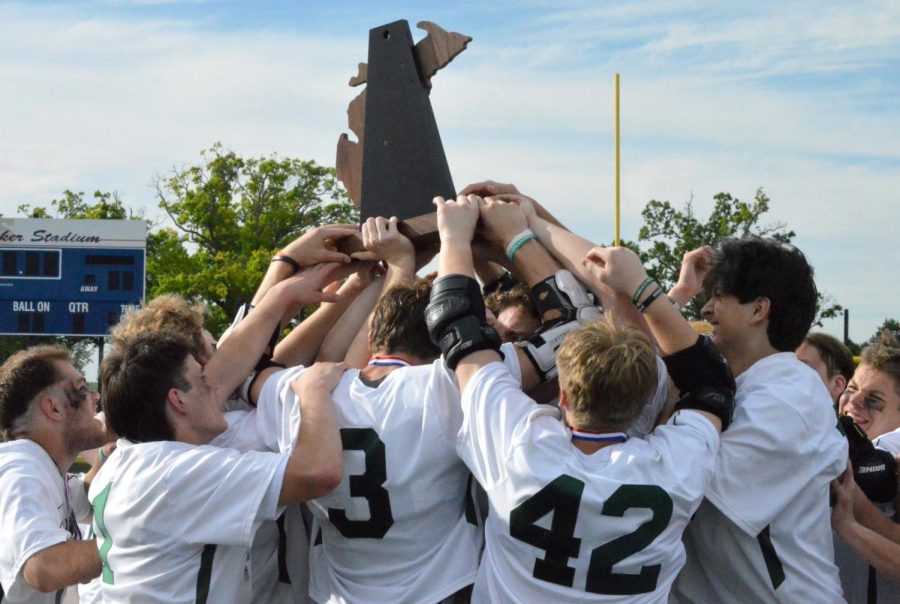 For everyone on the lacrosse team’s roster, Saturday’s State championship contest was more than just an average game. While that may seem obvious, it may not be for the reasons you think.

“Winning a championship with these guys means a lot, especially after losing the last two years,” senior Cam Deines said. “We all had the same goal at the start of the season, and we are all so glad to finally come out on top.”

This game wasn’t necessarily more meaningful simply because of its importance and it being the last game of the year. For the past two years, the Rangers have fallen just short of their championship goal, losing to East Grand Rapids for two years straight in the final. For the seniors that weren’t on the 2016 championship team, and even the ones who were, the pain and emotional stress felt through those two draining losses is something so few athletes will go through. However, adversity is something this group loves, and the Rangers have constantly rebuilt year after year and came back with the exact same goal: winning a State championship.

Saturday’s contest started out a bit slow for the Ranger offense, and it took some time for each team to settle in. Forest Hills Eastern was clearly ready to go and amped up for the game, looking for its first State title in program history. The Rangers began the game with a faceoff win from senior Logan Wedder, and the boys instantly began to control possession. Sophomore Carson Deines was ready when the lights were brightest, breaking the ice to make it 1-0 for the Rangers two and a half minutes into the game.

However, after the FHC goal, the Hawks began to pick up the pressure. Thankfully for the Rangers, senior Jack Nolan came up big to stop the Hawks from tying up the game with 6:40 left in the first quarter. Play began to open up and the game was pretty back and forth, but senior Tate Hallock took a shot from distance that doinked off the crossbar, remaining unable to take the pressure off the Rangers. Even under pressure, the Rangers played suffocating defense thanks to an incredible effort from seniors Cam Deines and Riley Murphy, two players who have led the Ranger defense all year.

“Ultimately, we just had to stay calm, composed, and confident [when dealing with pressure],” Cam said. “We knew throughout the game that our shots would eventually fall.”

FHE stayed energized, creating a good scoring chance, but Jack came up in the clutch once again, denying the Hawks of the tying goal with 2:25 left in the quarter. However, less than 30 seconds later, Tate capitalized on another clear opportunity, making the game 2-0 at the end of the first quarter.

45 seconds into the second quarter, Carson showed his worth and great potential as a young underclassman playing significant minutes in the biggest game of the season. His goal at the 11:17 mark in the second increased the Ranger lead to 3-0, and FHC was starting to feel more comfortable and just looked like they were having fun playing. However, the Rangers still couldn’t score much. That was until the 7:35 mark in the quarter when senior Luke Majick scored two goals within 25 seconds to make the FHC lead 5-0, with one of the goals being a screamer of a shot from 18 yards out. Senior Evan Metaj scored his first of 4 goals a minute and a half later, and he was quickly followed by another goal from Luke, giving Luke a hat trick and the Rangers a 7-0 lead with 4:28 left in the half.

Suddenly, FHC was in complete control of the game. However, FHE did begin to generate a bit of pressure once again, and Eastern’s Sam Bowen finally got the Hawks on the board with 2:31 left in the first half. Fortunately for the Rangers, Evan quickly canceled out FHE’s goal with his very own just 15 seconds later. Quickly after, FHE scored once again, but the Rangers were there to clean things up once again, with the next goal coming from Tate to bring the lead back to 7 goals with a 9-2 advantage. It seemed that every time the Hawks increased the pressure or looked like they might make a run, the Rangers had an answer and shut them down.

“It took us a while to get used to their zone defense, and we were also using a new offense,” Luke said. “However, once we got the hang of things, we were able to click and answer any of their chances.”

After entering the locker room with a 9-2 lead, the Rangers started off the second half with three consecutive goals to bring the advantage to 12-2. Thanks to goals from Evan, Tate, and junior Jackson Clay, the lead was now 10. On the day, Tate scored 5 goals, while also assisting his teammates 4 times, including the aforementioned goal from Evan.

Over halfway through the third, FHE scored two goals in a row, but the game was fairly out of reach for the Hawks already. To make things worse for Eastern, Carson’s third goal of the game and Evan’s fourth immediately canceled out their run and brought the FHC lead to 14-4 at the end of the third quarter.

The fourth quarter was filled with spread out playing time, but the starters were still put in through even rotations. Besides junior Hayden Sarjeant’s goal 15 seconds into the fourth quarter, the other 5 FHC goals in the final period all came from starters. Tate and Luke each scored twice in the final 12 minutes, bringing each of their goal totals to 5 goals apiece.

The game finished 20-4, and in this case, the score truly did tell the whole story. The Rangers dominated from start to finish and outclassed and outperformed the Hawks with the incredible talent levels that FHC has.

“It feels really good to win the championship this year,” Luke said. “As a senior, it means so much to go out on top and finish on a high note.”