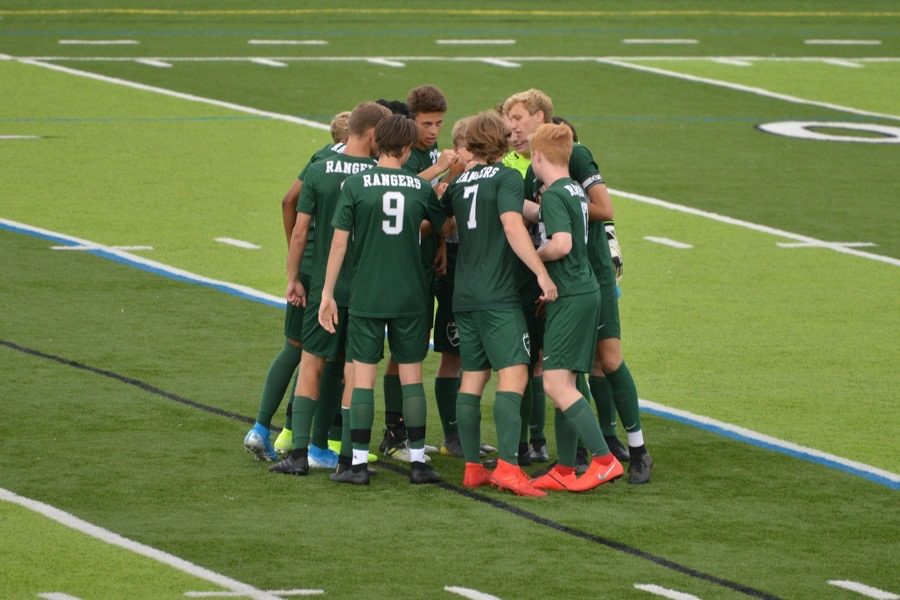 Senior Sammy Postlewait would pave the way for the boys varsity soccer team to claim its first win of the season with a dominant 8-1 win over the Greenville Yellow Jackets. Sammy was all over the field and did a superb job of running down the field and creating easy finishes which turned into the goals. Seniors Richie Alvarez, JT Guntern, and Micah Gschwind along with sophomore Joe Robertson rounded out an outstanding scoring night for the Rangers.

The plethora of scoring began less than four minutes into the game when Sammy got a pass from the midfield and placed the ball right past the goalie after it was initially saved. Sammy would then score his second goal of the game just two minutes later off of a Yellow Jacket miscue on the defensive end to put FHC up 2-0. After a few minutes of back and forth, JT would get his first goal of the year with a beautiful shot from outside the box and the Rangers began to fire on all cylinders.

Just a minute later, Sammy completed the hat trick with his third goal of the evening and the team’s fourth goal to give the team a remarkable 4-0 lead. Soon after Sammy’s goal, Richie would put in his first goal of the season with a nice finish right at the net. FHC was firing on all cylinders offensively, but the offense wouldn’t have got nearly as many opportunities as they did without the midfield and defense displaying some great passes. One of the star performers in this category was senior Dani Ahmetovic, who did a great job of finding many open teammates for open paths to the net.

Joe Robertson buried his first varsity goal with 14 minutes remaining in the first half off of a nice breakaway and pass from the midfield. Micah Gschwind would also have a breakaway score to give the Rangers a whopping 7-0 lead over the Yellow Jackets. The last goal of the half would be Sammy’s fourth goal of the game and put FHC up 8-0, which is the score for a mercy if the score held until halftime. Greenville got on the board late in the first half to prevent the early mercy, but FHC still went into the locker room up 8-1.

As much as the Rangers got opportunities in the first half, they played some phenomenal defense in the second half. Senior goalie Kyler Williams was outstanding at goalie and got some help from senior Ethan Hale. The defense really proved its depth last night as a whole new defense came into the game and didn’t allow a single goal in the second half. Senior Mitchell Haberman and junior Rod De Oliveria played excellent on the backline and did a great job of defending the Greenville forwards. Despite a chippy second half, the Rangers claimed their first win of the season over the Yellow Jackets 8-1.

The win puts FHC at 1-2-1 on the season and a strong 1-0 start in conference play. The Rangers have a quick turnaround as they will square off against the Cedar Springs Red Hawks on Wednesday. FHC will need to keep up its offensive firepower and keep locking down on defense. The loss of starting center back and captain junior Mattew Mahoney hurts, but the team showed Tuesday night how deep the defense is. If the team can do both of these things, look for the Rangers to start out 2-0 in conference play.