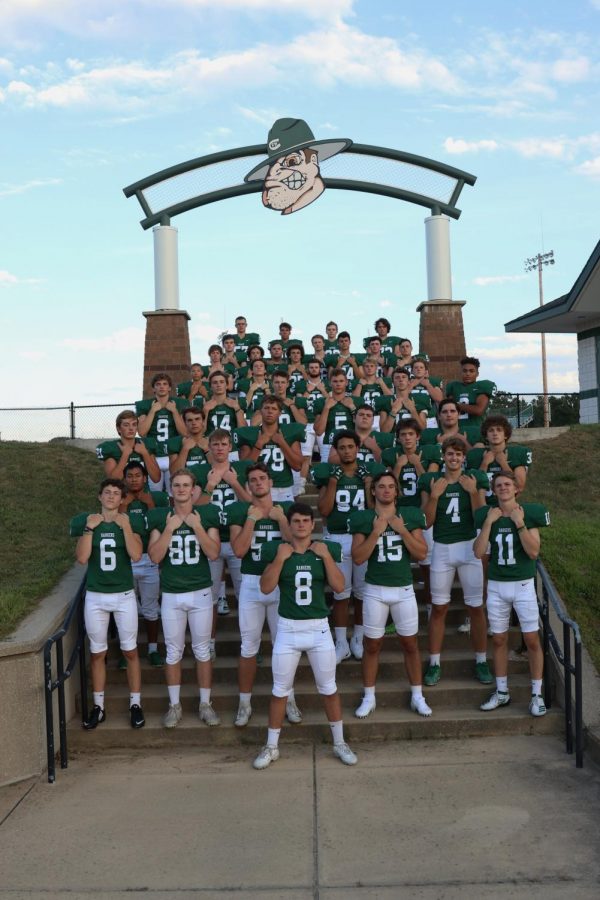 After raising the bar in 2017 and then slowing things down in 2018, the varsity football team is looking to get back to where the program was just two years ago. With plenty of talent and a reloaded roster, the team is looking promising ahead of the 2019 campaign.

“Every year our goal is the same,” said head coach Tim Rogers. “To win the conference and make the playoffs.” In order to achieve both of these goals, the team will have to come together quickly having such a young roster, as they will need to take advantage of early opportunities to rack up some very respectable non-conference wins.

To start the season, the Rangers will take on the Jenison Wildcats, a team that is coming off its best season in the past 15 years. The Wildcats secured their first playoff berth since 2003 last year and went 7-4, while also losing to FHC in the process. In the opening game last season, the Rangers looked sloppy and overall inconsistent throughout the entirety, and there wasn’t much fluidity on offense. Thankfully for the Rangers, a few big plays secured the victory, especially Evan Metaj’s interception towards the tail end of the contest.

This year, however, Jenison is a completely different team. They lost the starting quarterback in Kyle Nott, but return two very different options this year, with one of them being senior Caden Beurkens. The Wildcats are going to come out hungry this year, and especially Thursday night, looking to continue the momentum of last year’s season.

What saved the Rangers in this game last year was the play of quarterback Luke Majick, but now that he’s gone, the reins are being handed over to not one, but two players. Senior Jimmy Scholler will be starting, but junior Carson Mocherman is going to be getting plenty of reps too,

“Scholler has been the most consistent in the pre-season, so he will start,” Rogers said, “but Carson will play periodically throughout the game each week.” While Luke Majick’s injury last season didn’t generate many positives, one of the few ways was the experience Jimmy and Carson garnered while under center for the remainder of the season. They both present different threats, whether it’s on the ground or in the air, but the position is looking promising for the Rangers.

After the matchup with Jenison, the boys will focus their attention on the Panthers of West Ottawa. The Panthers are coming off of two seasons in a row with playoff berths while going 1-1 against the Rangers in that process. Both of these games came down to the wire, with late-game heroics coming from each team, but West Ottawa came out on top last year.

The Panthers lose three-year starting quarterback Isaac Van Dyke, but junior Jake Zimmer is looking to finally get his shot at the starting position and will look to impress. Junior wide receiver Blake Bosma has been on varsity since freshman year, and he’s going to be the Panthers’ number one target this fall.

However, the Rangers also have some juniors that are going to be making a big impact this year. Juniors Joey Wise, Carson Deines, and Jonah Spates will all play vital roles this year. Each one of them will start on both sides of the ball, with Carson being a huge need at linebacker, Joey at running back, and Jonah at receiver.

Jonah isn’t the only receiver that will be a major threat this year, however. Seniors Jackson Clay and Hayden Sarjeant both return, and Jackson also contributes heavily on special teams with kickoff and punt returns.

While there are some key returners, this FHC team is very young and inexperienced.

“We are inexperienced at a number of positions with quite a few juniors stepping in to help a smaller senior class,” Rogers said. “However, we have depth that we haven’t had in years at FHC. This team will get better each week with experience and will be playing it’s best football the last third of the year. We just need to get to game seven and be in a position to make the playoffs.”

After West Ottawa, the boys will travel to Grandville in a rematch of another heartbreaker from last year. After a failed faked extra point in the final seconds, the Rangers lost. This year, Grandville returns a lot, including star running back Cam Terry, who ran for 1,200 years last year. Not only that, but the JV team for the Bulldogs went 8-1 last year, so they have a lot of quality coming up in the program.

Once the first three games are passed, the conference season starts up. Just like last year, the first conference opponent is Forest Hills Northern. The Rangers obliterated the Huskies in the most recent rivalry game between the two, and FHC has dominated the series as of late. Depending on how the first three games of the season go, a win here against a crosstown rival in Forest Hills Northern could be a huge statement heading into the conference schedule.

Following three straight away trips, the Rangers will return home for a rematch against Northview, a team FHC has traditionally beaten. However, things did not go to plan last year. After Luke Majick went down with an injury very early in the game, the offense looked deflated, and the defense couldn’t stop the electric Wildcat offense under a hostile crowd. The boys will look to reverse this outcome this year with a completely different Northview team, and the game will surely be packed at FHC with it being the community tailgater.

The Red Hawks are really establishing a winning culture in Cedar Springs, having claimed three out of five conference titles and making the playoffs four times in the last six years. Not only that, but Cedar also made it all the way to the Division 3 semifinal where they ultimately fell to Muskegon.

The Red Hawks lose a lot of talent up front, but they do return some key players. Ryan Ringler, a player who always troubled the Rangers, has graduated, but three-year varsity linebacker and running back Zak Schmid returns and is ready for a big year. 2018 first-team OK White All-Conference defensive back Ben Shaw returns as well, and he’ll see plenty of reps at running back. Cedar Springs will present a huge challenge once again, and the Rangers will need a win here to keep things going,

To end the season, a three-game stretch of Ottawa Hills, Lowell, and Greenville should be an easier end to the season, but you never know how the season will go with each team. Victories of 55-20 over Ottawa Hills, 35-10 over Lowell, and 55-0 over Greenville make it seem like success against these teams should continue, but games become unpredictable towards the end of the season, especially rivalry contests like Lowell.

Overall, this young and inexperienced team needs to come together quickly and develop. With a tough non-conference schedule, some wins against high-quality opponents could create some serious momentum and propel a very successful season for the Rangers.