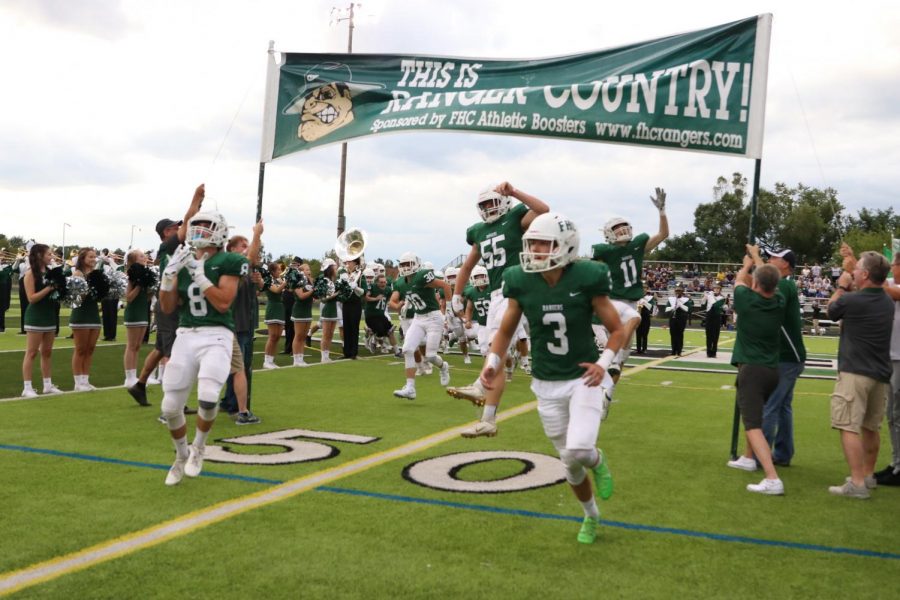 In one of the most unorthodox high school football games in recent memory, a very defensive game that saw very few scores ended in a 14-7 victory for the Rangers. Just as the second half was set to kick off, a massive onslaught of heavy clouds crept into Ranger Memorial Stadium, bringing with it hours of lightning. The contest was postponed until the next day after the two teams called it quits after two hours and twelve minutes of constant delays, resulting in the second half being played Friday afternoon. While many could expect the team to come out flat after an unconventional break, the Rangers, and especially the defense, came out in full force to shut out the Jenison Wildcats on the second day of the game.

“The rain delay/cancellation allowed us to go in and watch film, which was important because, at the end of the first half, the Jenison offense was giving us some problems” head coach Tim Rogers said. “We made some adjustments for the next day and they proved to be good. Hopefully [the defensive performance] has set a tone for the rest of the season.”

Not only did the Ranger defense shut down the Wildcats in the second half, but the first half also saw very little success from the Jenison offense. After FHC was forced to punt on the first drive of the game, the Wildcats took over. After a couple of pass breakups and tackles for loss, Jenison was forced into a 3rd and 12 in its own half when junior Carson Deines came up big with one of his monstrous 14 tackles on the day to hold them and force a punt.

“Defensively, we all play fast and hard,” Carson said. “We’re a physical team, and everyone wants to make a play on the ball, so it’s really hard for the other team to make big plays on us.”

While the Rangers were forced to punt in the drive beforehand, senior Jimmy Scholler showed what was to come on the ground, running for multiple first down gains before the FHC offense was stopped. After a very short Jenison punt, the Ranger offense got rolling. The passing game wasn’t playing out the way the team would have liked, but a couple of short gains in the air and a 20 yard run from Jimmy put FHC in the red zone. The Wildcat defense woke up as the Rangers were approaching the endzone and forced a 4th and short. Rogers decided it was time to go for it, and the fake jet sweep resulted in the ball being kept in Jimmy’s hands, but he was stuffed at the 11-yard line, just short of the first down.

After the turnover on downs, Jenison took over on its own 11. However, the ball was quickly fumbled, and the Ranger offense took over at Jenison’s 23-yard line with just under eight minutes remaining in the first half. Junior quarterback Carson Mocherman received some reps under center with his ability to run the ball well, and his 14-yard run with seven minutes left in the half set up the Rangers’ first touchdown of the game. After Carson’s run, senior Jackson Clay received the ball off of a jet sweep from 9 yards out with 6:21 left in the half, capping off a successful and efficient drive in the red zone as he took the ball into the endzone untouched.

While Jenison had been limited to very little success on offense, after the touchdown from Jackson, the Wildcat offense started to build some momentum. A 34-yard run from Jenison’s Zach Walker that was quickly followed by another first down put the Wildcats deep in Ranger territory. Short gain after short gain resulted in a long drive, and Jenison finally tied the game up at 7-7 with 2:11 remaining in the first half off of another short run.

The Rangers then received the ball with close to two minutes remaining, but the boys couldn’t get much going. While FHC did reach the Jenison half of the field, the passing game looked rusty and the Rangers couldn’t get a first down once down there. The half ended 7-7, and the teams entered the locker room to discuss how to improve their own offensive performances.

When the two teams strolled out onto the field ready to begin the second 24 minutes, gloomy clouds came into the area as far as you could see. Lightning began to strike in the area almost immediately, and the surrounding area went completely dark within minutes. With a constant light show seemingly never-ending, 30-minute delays continued to pile on until 10:30 pm, when the game was finally postponed until the next day after two hours and twelve minutes of delays.

“I was glad that we called the game after all,” Rogers said. “The long wait would have been difficult to rebound from.”

The teams returned the very next day to continue the game at 1:00 pm in very different conditions, as the sun shined brightly and the sky was clear as day. Both teams started off slowly on offense, but that was also in part due to the well-disciplined and powerful defenses from each side. The third quarter consisted mostly of defensive stops and punts, but Jimmy made a huge breakthrough with 1:31 left in the quarter when he took the ball in the endzone from 39 yards out, diving for the 7 points in the process. Overall, Jimmy had an incredible game on the ground, running for 139 yards and a touchdown on 21 carries.

“On my end, that just all stems from lifting and conditioning,” Jimmy said. “However, most of the success comes from the linemen and skill guys who blocked so well.”

The next possession for Jenison consisted of another long drive that took them all the way down to the FHC 1-yard line with eight minutes left in the game. While a touchdown seemed imminent, the Wildcats were stuffed on both 2nd and goal and 3rd and goal. On 4th and goal, Jenison shot themselves in the foot as they were going for the score when a delay of game was called, sending the Wildcats five yards back. They still went for it on 4th and goal from the 6, but FHC stopped them short of a touchdown.

Once the Rangers received the ball deep in their own territory, they ran the ball to stay conservative, which resulted in a punt that gave Jenison solid field position. However, on the first play of the drive, a pass to Jenison’s Walker came off of him and bounced straight to Carson Mocherman, who intercepted the ball and fell to the ground. While there was still plenty of time left for the Wildcats to get a stop, the Rangers were now going to be able to milk the clock further down.

FHC moved the ball and got a couple of first downs, but they were eventually stopped and forced to punt. On the punt, there was a miscommunication, and the ball was snapped over senior kicker and punter Will Gustafson’s head, giving Jenison fantastic field position. Just a couple of plays later, however, the FHC defense came to rescue once again when senior Chris Junkunc forced a fumble that was recovered by senior Bryce Kerr, clinching a 14-7 Ranger victory.

With this opening win, the Rangers made a statement that this season can be something special. Jenison is a very talented team filled with plenty of returners that gave FHC some serious trouble last year and even made a run in the playoffs. After advancing to 1-0 on the season, the boys will be happy, but they’ll also be even more hungry to come out next Friday and beat another talented non-conference team in West Ottawa. Despite the win, according to coach Rogers, there are still plenty of things to improve upon ahead of next week, with one of them being the aforementioned passing game.

“Our passing game needs to improve,” Rogers said. “Right now, we are too one dimensional. While we played good defense [against Jenison], we must stop giving up big plays. We have many guys playing varsity football for the first time, and we need them to get acclimated quickly because they will be depended upon.”