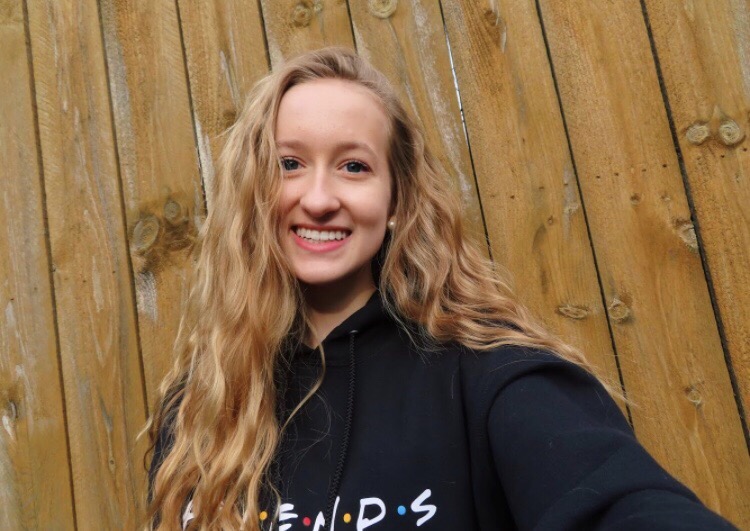 A photo of sophomore Holly McLenithan, a member of FHC's crew team.

Entering freshman year, sophomore Holly McLenithan was lost. Dropping her beloved pastime of karate—but not before earning the notoriously intense black belt—Holly was without a passion during a year of chaos and confusion as high school life had just begun.

Searching through all the uncertainty her first year in high school brought, a voice was heard over all the others: graduate Jayla Williams. A then senior, Jayla coaxed Holly into a tentative role in the crew team, persuading her to make a soon-to-be perfect fit for Holly.

“She came up to me,” Holly recounted, “and she was like, ‘Holly, you need to [join]; it will change your life forever,’ because she was a four-year rower and captain on the team last year. She lives [and] breathes crew. She got me [at], ‘Okay, at least to go to conditioning. If you hate it, quit, but go.’”

Following the enthusiastic advice from Jayla, and tagging along with a few friends, Holly started attending spring crew practices with the mindset of being able to leave whenever. Hesitant at first, Holly soon fell in with the team, and since freshman year was the first opportunity to start crew for any other freshman too—unlike sports such as soccer and field hockey—she didn’t feel behind but rather accepted.

“I’d go in [to practice],” Holly said, “and all these girls were so supportive, constantly telling each other, ‘Oh, you look good today.’ Even if my eyes are like obviously puffy because I’ve been crying and I show up to practice, they’re like, ‘Holly you look amazing. Your eyebrows look so good.’ It’s such a good environment of just making each other smile and making each other happy and joking around.”

Constant joking and easygoing friendship from the beginning kept Holly in crew, and it masked any of the long days.

Those long days were often; with practice every day after school and all-day regattas, the boat races, that sometimes led in Sunday, crew was nothing short of grueling and time-consuming. Yet through it all, none of the horrific regatta porta-potty experiences or mixups at the start line can overpower the love Holly has for rowing.

“When you are in the moment, it makes you sad, and you really don’t want to be there,” Holly admitted. “Then when you get home, you can’t remember any of that. All you can remember is how happy it made you. So it’s really, really weird. I would go home, and I would cry to my mom being so stressed about everything. She goes, ‘Are you doing the season? Are you doing it again next year?’ I go, ‘Of course.’ It’s really weird.”

This dedication through it all undoubtedly paid off. As one of the three novice coxswains, the members of the boat who steer and coordinate the rowing, her freshman year, Holly was selected twice for regattas that were invitation only. And those selections couldn’t have come at a better time.

“I got chosen for both of them,” Holly said, “which was a really big deal for me because I was going through some tough times at that point, and then just getting chosen for those really made me feel so happy and boosted my self-esteem a little bit. Sometimes you just need that.”

Noting the final regatta in Canada as her favorite, and not just for the hotel, any doubts of ever quitting fled her mind, and she embraced crew head-on.

Embracing it all meant completely taking on the role of the coxswain, something based heavily off personality. As Holly explained, a coxswain has to have “a type of authority over people” since respect and a “kind of honor” help keep the boat rowing smoothly.

This kind of act like you know what you’re doing attitude is what shapes a coxswain, making them successful, and Holly has always fit that role. Picking up leadership through previously mentioned karate classes, Holly is, as she puts it, “the girl who has all the pens,” and has never been afraid to step up.

“From the first day of practice, I was volunteering to lead the stretches,” Holly said, “and I’m doing all these things just because it’s naturally me. I’ve always loved presentations in class and being organized. I’m just prepared. I’ve done a lot of [leadership] stuff in the past, and it’s just kind of a big part of who I am. It is pretty easy for me.”

Despite seeming like an obvious fit for coxswain from the start of the season, Holly was undecided on joining the team. Jayla’s encouragement helped sway her, but the main issue in the back of Holly’s mind was much bigger than being indecisive: her wrists.

Holly has wrist laxity, which, in her own words, means she’s “loosey-goosey.” This laxity translates into her tendons and ligaments being less tight than the average human, causing strenuous wrist work or tight weight on her wrist to hurt much more than usual. While this caused her to falter away from rowing, her innate leadership shone through.

“It just hurts in my wrists a lot,” Holly explained. “The more I use them, the more it hurts. Rowing, obviously, is a big wrist sport. I knew going into this season that I wouldn’t be able to row, so I was like, ‘Okay, what can I do?’ and Jayla came up to me, and she was like, ‘Holly, you’re a coxswain. Like, even if you could row, they would make you a coxswain.’”

And Holly will be forever grateful for taking on her role in crew. Falling into her intrinsic skills as a leader, she’s been able to grow close with a team of girls who will always be there for her in the fun-loving environment crew has crafted.

Along with these newfound friends in a newfound sport, crew has brought on a priceless revelation for Holly, giving her an authentic, unbeatable community and invaluable high school experience.

“[Crew] also made me realize that I’m not the only person in the world with a physical disability,” Holly said. “That felt really, really good to finally realize [that] I’m not alone in half of the things that I thought I was alone [in] because it’s such an environment that you can just talk. People will ask you what’s wrong, and they really mean it every time they say it. [Crew]’s amazing.”