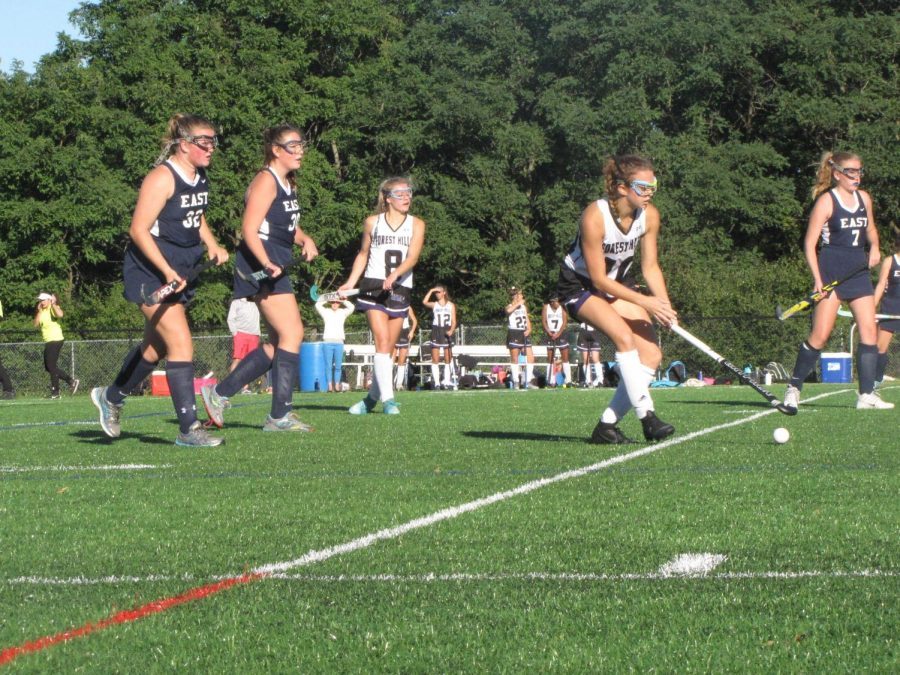 Last night, the varsity field hockey team took on the Novi Wildcats at home for its fourth and finest game of the season so far. The Forest Hills team was defeated in a close, hard-fought battle 3-1 and have much to take away from the matchup.

“The girls started off kind of slow,” head coach Andrea Shaner said. “We were struggling to maintain good positioning throughout the game but played with high intensity.”

Forest Hills’ only goal in the first half was made by Kalamazoo High School sophomore Daphne Westbury, who scored a good-looking goal on the Wildcat defense. However, Forest Hills was in need of some intensity on the defensive end; they ended up forfeiting 3 goals within the first half of the game.

The Forest Hills team is a very young team this year, and they hope to continue improving as they take the season one game at a time. With a new formation in place at midfield this year, the girls are learning and adapting each game to not be as tight and together positioning wise.

Fortunately, the second half was when the Forest Hills team truly shined. The girls were playing with increased intensity and speed than they displayed in the first half. Also, enhanced pressure from Forest Hills on the offensive side was important in keeping Novi from scoring again throughout the second half of the game. This new, contagious energy coming from Forest Hills allowed them to begin flowing on the field and show off the defensive capabilities of the team.

After struggling a bit with marking on defense, Forest Hills Central senior Bella Piccione was able to assist in a huge way to shut down Novi’s offense during the entire second half. Bella was largely assisted by Forest Hills Central freshman Shannon Murphy. Shannon did an amazing job bringing the ball up the field, as well as intercepting the ball from the Novi forwards.

“She was always there to stop the other team from getting down the field,” said Forest Hills Central sophomore Olivia Booth.

Despite falling to the Wildcats 3-1, the Forest Hills girls are genuinely excited to grow as a team. Since the Forest Hills team contains a significant amount of younger girls, the team is playing and practicing with a simple mindset: getting better each game. FH is now 0-4 this season and is readying themselves for a very important game against Saline HS on Saturday the 14th.

“We are really just playing game to game, picking a couple of goals each game to improve upon, and really focusing on those particular things,” Shaner said. “Communication was the goal of today’s game, as well as improved positioning and passing.”