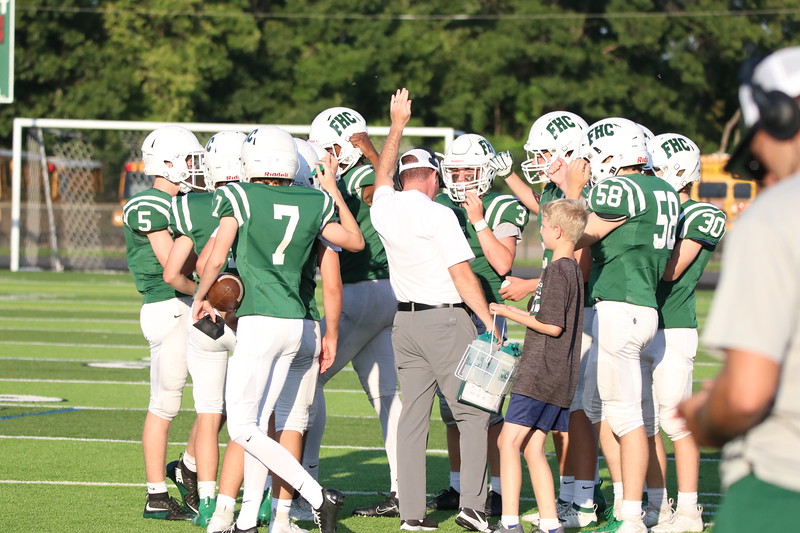 The ball is kicked up into the air, soaring straight into the arms of star sophomore running back: Tyler Weaver. Tyler receives the ball and quickly gets his feet churning underneath him. He runs up the middle, juking his way past defenders as his blockers plow through, until finally being brought down at the 25 yard-line for the 60-yard gain to start the second half.

“I was really proud of how we played today from start to finish,” sophomore Rhosius Arius said. “It was fun to see how we came together to beat a team like Grandville after our big loss last year.”

The game started out slow as the Rangers and Bulldogs couldn’t find anything offensively. It was defensive stop after defensive stop for the whole first quarter until the clock ran out.

The second quarter was a whole different ball game for both sides. It started off with a few long runs that led quickly to a rushing touchdown from sophomore Hunter Robinson. Hunter had the game of his life today, both in the air and on the ground, and came in clutch for FHC.

“I thought we did well as a team through the air,” Hunter said afterwards. “Later on in the game, though, I thought I made the right reads and ran the ball pretty well.”

As soon as Grandville received the ball, they quickly realized their demise: the Ranger defense. They constantly pressured the quarterback for the whole 40 minutes and forced them to give the ball up. After a brief defensive stance, the Rangers’ offense starting firing on all cylinders.

With 1:15 left in the second quarter, Hunter threw a dime to crossing receiver Rhosius Arius who caught it in stride and ran it into the endzone for the 14-0 lead to end the half. The Rangers went into their locker room cheering and mentally gearing up for another rigorous half of football, whereas the Bulldogs were altering their game plan slightly.

As head coach Ty Hallock put it, “We need to improve on the mental side of the game. Alignment and assignment sound football has to be worked on constantly.”

The Rangers did just that in the second half as the ball was kicked off to FHC to start the 3rd quarter—right into the hands of Tyler Weaver. With blockers in front of him, Tyler danced through a sea of Bulldogs until finally being tackled at the opposing 25. Coach Hallock swiftly took advantage of their surge of adrenaline and set a passing play to Rhosius for the touchdown making it 21-0 to begin the 3rd quarter.

Shortly after, Grandville punched the Rangers in the throat as they returned the kick and capped it off with a two-point conversion to make it 21-8. Their efflux of energy was quickly quenched, however, when the Rangers used two plays to reach the endzone in the next possession.

It started with a 30 yard run from Hunter, and was crowned with a 35 yard run for the touchdown from Tyler. Clearly, though, the Rangers got a bit too excited as they jumped offsides and forced a longer extra point which resulted in a miss from sophomore Luke Gustafson.

Another key player for FHC was sophomore Benny Scholler who had a total of 3 turnovers on the night. One was a fumble recovery early in the game, and the other two were contested interceptions in the 3rd quarter. This was clutch for the Rangers as it halted the progress of the opponent and forced a turn of possession and momentum.

The Bulldogs would later go on to score once more, but it mattered not. The Rangers ended up defeating them 27-16 and clearly dominated on both ends of the field.

“I challenged the guys tonight to be intentional about everything they do,” coach Hallock said. “I think we had multiple guys that did just that and made a lot of plays. I’m very proud of them for bouncing back against a team that they played a year ago and lost pretty handily.”

The Rangers face off against the Huskies of Forest Hills Northern next on Thursday, September 19 at home.