Robotics team finishes “best year ever” with a trip to Worlds 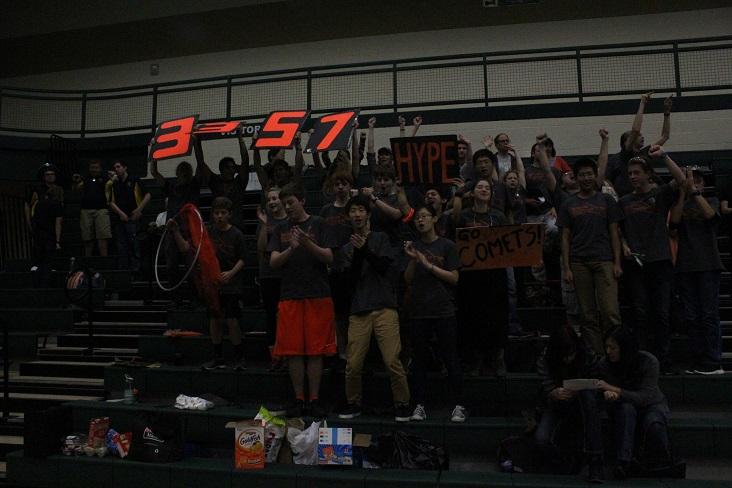 For some people, it’s simply a little over a month, or maybe one part of a marking period in school. It might be the duration of an athletic pre-season; perhaps the countdown to a birthday or a holiday or an important test. It’s the approximate length of time between New Year’s and Valentine’s Day, or between the Fourth of July and the beginning of fall sports practices.

For the COMETS, however, six weeks is the duration of time allotted for a very specific task: constructing a robot.

“We have 6 weeks to build our robot, starting from the day the game [or] competition is announced to bag day, where we literally put our robot in a bag and document it, [which] enforces the 6 week build limit,” said senior Max Moore. “We start by planning and designing our bot with Solidworks CAD. Then we go into prototyping to see what works and what doesn’t. Once we have our final design with working prototypes, we construct a prototype bot. We get a code working, practice driving this bot, have tryouts for drive team, and use feedback to then go back into designing another robot. We then construct 2 more robots; one to compete with, and the other to drive and practice with.”

COMETS (Creating Outstanding Minds, Embracing Technology and Science) is the combined robotics team of all three Forest Hills high schools, comprised of over 30 members who meet year-round to complete the highly technical and labor-intensive task of readying a robot to successfully play an extremely specific game which is revealed each year in early January. This construction period is followed by a long road of competitions, a road which the COMETS took all the way to the World Championships in St. Louis, Missouri this year.

“[This season] was fantastic,” said Moore, captain and primary driver for the team. “We were writing COMETS team history.”

The final season for Moore, a four-year member of the team, was groundbreaking, marking the fourth time in the team’s seven-year existence that the COMETS have made it to Worlds. More remarkably, however, it is just the second time that the team has earned a spot at worlds based on points, rather than going to St. Louis as a wild-card pick.

“This year we definitely had something different on the team,” Moore reflected. “I think after going [to worlds] on lottery [last year], we wanted to actually earn it this time, and that we did. We had fun, we joked around, but the whole season we had this determination deep down that we were going to make it to worlds.”

That determination found an outlet in pre-season planning, the six-week build period, and finally, an intense 9-week run of competition consisting of six weeks of regional competitions, one week of district championships, a one-week break, then Worlds.

It was at the regional competitions in Lansing and East Kentwood that the COMETS truly began to stake their claim as one of the top teams in Michigan.

“[In] Lansing and East Kentwood we entered as underdogs for both competitions, but managed to take first in each,” Moore said. He credits their success to “practice and our excellent scouting and drafting to make a good alliance.” The “game” at each robotics competition is played 3-on-3: an initial round of games seeds each team, followed by a second round in which the top seeds “draft” other robots to be part of their alliance and then enter an elimination bracket.

“This was the first time the COMETS had ever been seeded high enough to pick other teams, rather than be drafted themselves,” Moore explained. “We then [went] on to top this by winning not once, but twice.”

The COMETS’ regional wins qualified them for the state competition, which came with a new set of both challenges and victories.

“At states, we performed very well, but some robots in our alliance suffered breakdowns, preventing us from progressing past octofinals,” Moore said. “While it was disappointing we ended up being stopped by breakdowns, we were content with our performance, especially with our two district wins. Between those wins, our design and engineering awards, and our good states performance, we had enough competition points to qualify for worlds.”

Exceeding expectations seemed to be the theme for the COMETS this season as they picked up two regional competition wins, state qualification, world quarter-finalist status, three separate engineering awards for their robot design, and recognition as one of the strongest teams in Michigan. Their original goal? Though according to Moore the determination to qualify for Worlds was always there, junior Sabrina Herman clarifies that the initial objective was simply to make it to states.

“At the beginning of the season our goal was to make it to the state championship,” said Herman. “Our team surpassed that goal sufficiently.”

The points the team racked up from awards, team rankings, and competition wins gave them an eighth-place finish at states, and thus, the trip to Worlds was sealed. Approximately seventy teams from Michigan go on to Worlds each year; this year, the COMETS qualified “with flying colors,” according to Moore. The top-ten finish at states is especially notable considering that Michigan has 411 robotics teams, more than any other state in the country.

Worlds provided an expanded stage on which the COMETS could show the skill of their robot as they competed against 400 teams from 40 countries and all 50 states. Approximately 29,000 converged upon downtown St. Louis on April 28th for the competition, all with their own robots uniquely designed to play the same game.

“At Worlds, … the venue is unlike any other competition,” Moore said. “It is simply massive, and accordingly, takes place over 4 days. There are as many as 8 games going on at once, attractions held by engineering and related companies, [as well as] informational seminars.”

Mentor Tim Peterson, an aerospace engineer who got involved with Forest Hills’ robotics program after his daughter, an FHN student, joined the COMETS in their inaugural year, explains that robotics provides a truly electric atmosphere even at smaller competitions. Worlds is a magnified version of the palpable excitement that exists at each competition.

“The atmosphere of a robotics competition rivals the excitement found at any professional sporting event,” Peterson said. “There is more energy and audience participation, along with a sportsmanlike attitude which we call ‘gracious professionalism.’”

The COMETS put on an impressive show at Worlds, with a particularly notable victory over team 2767 (“Stryke Force”), with whom Moore says he has had an “internal rivalry” since his first year on in robotics. Though breakdowns plagued the COMETS again and ultimately stopped their run, team members were pleased with the outcome.

“At world’s, our game managed to step up a further notch,” Moore said. “[We made] it to semifinals in our division [but were] prevented yet again from progression by breakdowns.”

In spite of the breakdowns which ultimately prevented them from moving farther on at Worlds, Moore says that this year was “indisputably our best year ever.” With this year’s advancements in robot production, sponsorship, image, and connections, the team is poised to capitalize on their recent success and continue to grow in the coming years.

For Moore, the end of this final robotics season is bittersweet. The COMETS’ positive trajectory, however, has him confident that the team is in good hands.

“I am so happy to leave the team in such a good situation,” Moore said. “I am going to miss the team so badly, but I realize my time is up and am now looking to help mentor a new team at or near Ann Arbor when I go to U of M.”

As Herman prepares for her senior season with the COMETS, she is also looking at long term plans for growth as the COMETS attempt to expand the robotics program to the middle school level. The COMETS are an FRC team (F.I.R.S.T Robotics Competition) team, but F.I.R.S.T. (For Inspiration and Recognition of Science and Technology; the organization which coordinates regional, state, and world robotics competitions) also offers FTC (F.I.R.S.T. Tech Challenge) teams for middle schoolers.

“FTC is the third level in the FIRST program,” Herman said. “They receive a challenge each year just like FRC and have to build a robot. The main difference is that their robots are smaller. We’d like to have the middle school team so that we can get more youth involved in STEM, and get more kids interested in joining the high school team.”

The team aspect of robotics is certainly a strong part of its appeal, and is growing stronger each year.

“There was definitely a new sense of connectedness I felt [this year],” Moore said. “We had a lot more team events and bonding experiences, [such as] a Christmas party, Lego night, lunch breaks, and movie nights.”

Herman agreed with Moore, noting that the closeness shared by the COMETS “makes sense due to how many hours we spend with each other.” The COMETS meet every day of the week during the season, spending anywhere from three to seven hours per day working together on their robot.

Peterson lists the bond between teammates as just one of the many benefits of robotics for high school students.

“Not only is it gratifying to see the camaraderie that grows among the students as they work together, it’s great to see kids learn skills that can transfer into potential career skills,” Peterson said. “Working with these high school students can be challenging at times, but for the most part it feels like I have an expanded family [with] lots more ‘sons’ and ‘daughters.’ It’s a F.I.R.S.T. Robotics family.”