Freshman football team holds off Grandville in a 14-14 tie 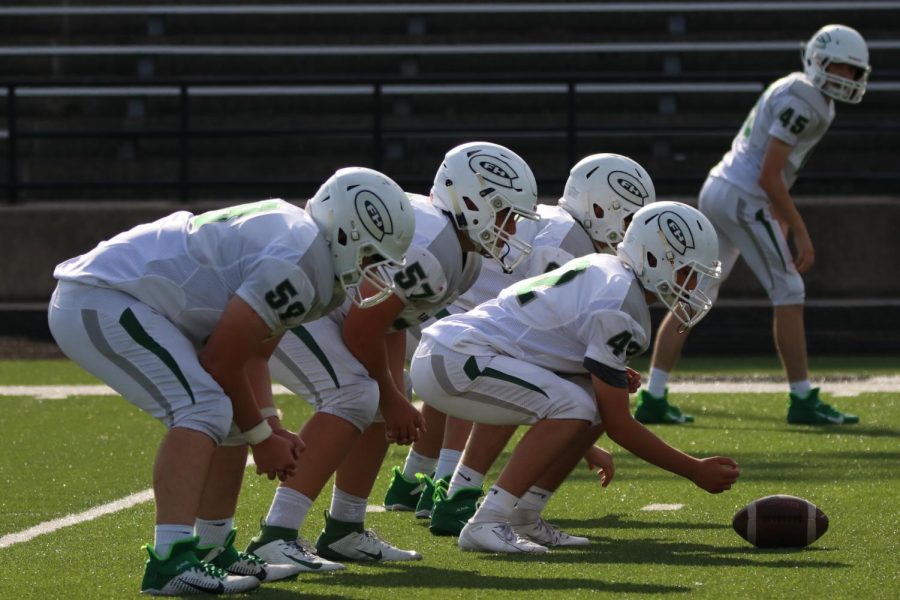 In a thrilling game, the Rangers came back and tied the Bulldogs of Grandville. Starting out with a slower pace of play, the game soon evolved into a back and forth struggle as the teams started to put points on the board leading to a dramatic fourth quarter play to avoid the loss and tie it up with the powerful Bulldogs.

The first half of the game was all defense. The Bulldogs managed to stop the more explosive offense of the Rangers while the Rangers did likewise against the punishing physical run game of the Bulldogs. Neither team showed weakness and it was anyone’s guess how the game would go as the half came to a close.

Coming out of halftime, both teams had their eyes on the end zone, not intending to leave the game scoreless. After another impressive defensive performance, the Rangers forced a punt from the Bulldogs. The kicker fumbled the snap and the Rangers recovered the ball on the Bulldog’s 20-yard line. After a solid, albeit short drive, Rowan Clay ran in the first points of the game. The extra point was missed, making the game 6-0.  After that, the Bulldogs came roaring back, not about to let the score go unanswered. Grandville marched down the field with their punishing offensive scheme and scored, putting themselves in the lead 7-6 as the clock wound down in the third quarter.

The fourth quarter started with a failure to score on the Ranger side. After a punt, Grandville once again ground down the defense and scored, making the score 14-6. The Rangers were in a tight spot, with both a score and a two-point conversion required to tie the game. The Rangers got the ball and began their drive with renewed intensity. Justin Osterhouse threw a long touchdown pass to Levi Makenzie, making the score 14-12 and giving the Rangers their opportunity to tie. Justin Osterhouse was once again given a pass and threw it beautifully to Lannen Partlo to secure the two-point conversion and tie the game.

The game concluded 14-14, with a hard-fought game on both sides. This was a tough game, but it got the team ready for the rivalry game against Forest Hills Northern next week. The Rangers are looking good going into this game and have proved themselves on the offensive and defensive side. This will still be a challenge though, and the Rangers cannot lose their focus as they try and improve upon their 2-0-1 record.