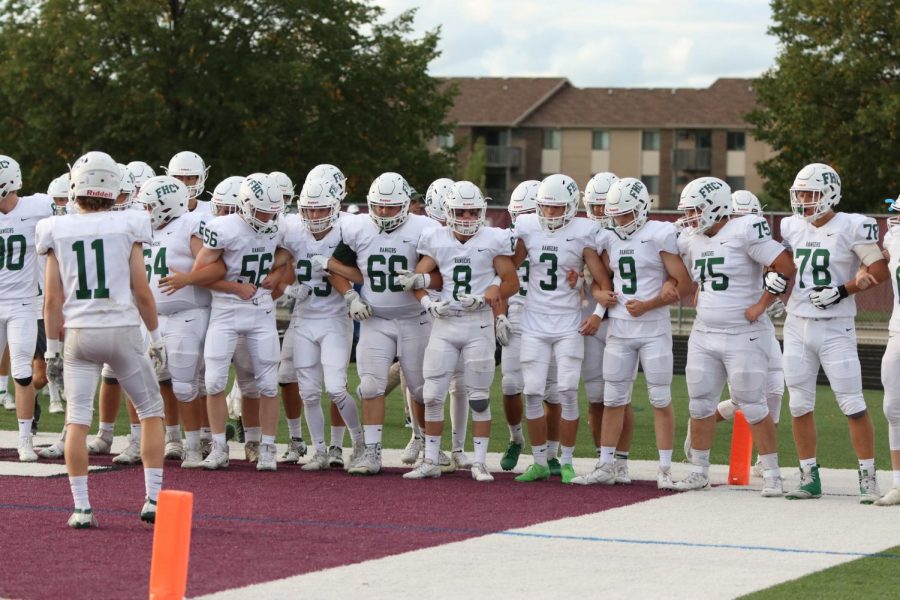 After falling to an early 32-7 deficit, the Rangers produced a near-historic comeback in Grandville on Friday night. The Grandville offensive playstyle—the Wing T—gave FHC some serious fits early on, but the Rangers showed true resiliency to come back after the first quarter to give them a chance to win it all with less than two minutes remaining. Unfortunately for the Rangers, the comeback fell just short of victory, but there are clearly many positives to take away from the momentous resurgence.

“That really showed how good we can truly be as a team and how tough we are,” said senior quarterback Jimmy Scholler after the game. “Most teams would put their down after going down 24-0 very early on but the way we came back showed how strong this team is.”

The aforementioned defensive collapse in the first quarter came under some difficult circumstances. The Wing T offense is a very complicated style, with many of the run plays looking very similar to each other for the first couple of steps before a runner breaks out. It is prone to producing big plays on the ground—especially at the high school level.

The Bulldogs received the kickoff and drove steadily to the FHC endzone before Grandville running back Marcel Love took the ball to the house from 29 yards out, giving the Bulldogs an early 8-0 advantage. Then, on the Rangers’ first offensive possession of the game, it was cut short when Jimmy’s pass was intercepted in the FHC half of the field by Grandville’s Nate Elders.

After taking over with advantageous field position, the Bulldogs took just a couple of plays to find the endzone once again, with the score coming from Marcel Love for the second time already, this time from 13 yards out. With successful two-point conversions on each score, the Bulldogs were already off to a 16-point lead just six minutes into the first quarter. After the Rangers were forced to punt on the next possession, Grandville’s electric quarterback Jaydon Vandeusen took over and went for a 65-yard touchdown run, extending the Bulldog lead to 24-0 just before the end of the first quarter. Both sides of the ball were struggling for the Rangers, but the Grandville offense was simply dominating at the line and in the middle of the field.

“It’s really, really hard to simulate that offense in practice,” said head coach Tim Rogers. “With the speed of the game being so unique, it was difficult for us to get our legs underneath us, and for that reason, we put ourselves in some bad situations and they jumped on us.”

While a team never hopes for an injury to an opposing player, after Grandville’s Jaydon Vandeusen went down with a leg injury, momentum started to build up little by little for the Rangers. A slow, draining drive eventually found the endzone for the Rangers thanks to a 3-yard quarterback keep from Jimmy with seven minutes left in the first half. In the second quarter, Jimmy really began to pick things up and led the FHC offense to many improvements after a lackluster first quarter.

However, just after the offense saw improvements, the Grandville offense picked up right from where they left off, driving down the field for an eventual 5-yard touchdown run from Marcel Love, his third of the day. Luckily for the Rangers, there was enough time for another offensive drive as just under four minutes remained in the half. With the clock approaching one minute remaining, Jimmy made multiple Bulldog defenders miss as he sprinted towards the goal line where he dove past another defender for the score, bringing the deficit to 32-14 at the break.

“Defensively, we obviously needed to be better,” Rogers said. “[Giving up] 32 points in an entire game is not acceptable in our program, let alone in a half.”

Almost immediately, the tides turned momentum-wise in favor of the Rangers. After receiving the second-half kickoff, the FHC offense continued its success from late in the first half. Once again, Jimmy made plays both on the ground and in the air to put the Rangers in dangerous positions, with the source of the score on this possession being a 33-yard run from Jimmy. After Jimmy’s run put the Rangers at the Grandville 24-yard line, senior Jackson Clay started to make an impact on offense as he took the ball from 24 yards out all the way for a score on the ground, making the game 32-21 in favor of the Bulldogs with 9:21 remaining in the third quarter.

After scoring to make it an 11 point game, the FHC defense finally forced a punt from Grandville. Thanks to some penalties, tackles for loss, and a lockdown defense near the line of scrimmage from juniors Carson Deines and Carson Mocherman, the Bulldogs punted from their own 45-yard line. The punt had a favorable bounce after it was let go by a Ranger returner, and the ball bounced all the way to the FHC 1-yard line before it was touched by a Grandville player.

“[In the second half] we tweaked our defense a bit, but not a ton,” Rogers said. “Once we got to see [the offense] for a little while, we made some adjustments, got comfortable seeing it, and we played a lot better and faster.”

Even though the Rangers were put in a very difficult situation, Jimmy still managed to make plays. FHC was forced into a 3rd and 10 from their own 1-yard line, and senior Hayden Sarjeant came to the rescue as he received the ball on the FHC sideline just ahead of the first down marker. On this possession, Jimmy distributed the ball magnificently, but he was efficient on the day overall as well, going on to throw 16/23 with 183 passing yards under his belt.

The Rangers were forced into two more 3rd and longs before they could get out of their own half, but junior Jonah Spates was ready at just the right time in both instances. Starting at the FHC 35-yard line and eventually ending at the Grandville 35, Jonah had receptions on 3rd and long two times in a row, with a combined yardage of 39 yards between the two.

Just 30 seconds into the fourth quarter, Jimmy capped off the 99-yard drive with a 2-yard quarterback keep to bring the FHC deficit to just 3 points, with Grandville leading 32-29. Following the FHC score, the Bulldogs drained the clock on the next possession. Taking the clock all the way down to five minutes remaining with run play after run play, the FHC defense finally stopped the Bulldogs at the Ranger 35-yard line after a turnover on 4th down.

The FHC offense was rolling and much of the success was coming on the ground. However, after taking over in their own half, the Rangers failed to secure a first down, being forced into a 4th and inches situation. In a make-or-break play, Jimmy kept the ball and quickly dove through the line and secured the first down for FHC as four minutes remained in the game. The offense continued to use its momentum, driving all the way to the Grandville 25-yard line. Unfortunately for the Rangers, as two minutes sat on the clock, Jimmy threw a ball in the middle towards Jonah, who was beaten to the ball by Grandville’s Nate Elders, his second interception of the game. Fitting for the Bulldogs, the man who started the dominance at the beginning of the game effectively clinched the win when times became tough.

While the Rangers did ultimately fall by a final score of 32-29, there are many things to be proud of despite the first-half struggles. The Rangers are now 2-1 amid entrance into conference play next week when they will open up the bulk of the season with a rivalry game at Forest Hills Northern.

“All in all, I’m happy with both sides of the ball,” Rogers said. “We’ll make a few adjustments, get our kids healthy, and be ready to play Northern.”