The Goldfinch is a surface level flop 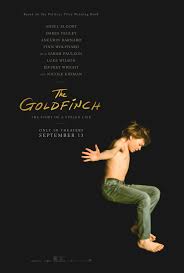 In order to practice the movie-obsessed mindset that I preach about every day and in other works on this site, I try to stay as up-to-date on Hollywood’s latest endeavors. So, when it was first announced that my favorite book The Goldfinch was getting a movie adaptation a couple of years ago, my interest piqued and my expectations rose.

Flash forward to the Toronto International Filmfest just under two weeks ago. The pretentious, self-declared film critic within me made sure I was aware of every detail that was occurring. When the night of The Goldfinch’s premier arrived, I sat with my phone, constantly refreshing to see the world’s first reaction John Crowley’s latest film.

I anticipated the mixed thoughts that professionals always have, but I was not prepared for the absolute onslaught of negativity that crowded my feed.

Still, unperturbed, I decided to wait until the general public could watch the movie before labeling the success—or failure— of the film. It disappoints me to say that I agree with my far more professional and talented counterparts; the movie was a mere shadow of its source material’s glory.

The odyssey of Theo Decker’s (a dual role of Oakes Fegley and Ansel Elgort) journey is condensed and fiddled with. He still remains newly motherless after a museum bombing and has just moved from uptown New York to wanton Las Vegas with stops in between. He still meets a colorful cast of characters and faces more than enough troubles for one orphaned boy. But, it all just feels empty.

At the most basic, eye-level analysis, the movie is lovely, beautiful even. Roger Deakins, an Oscar award-winning cinematographer, absolutely captivates his audience. The sights on-screen are as awe-inspiring as the titular painting that makes an appearance in the film. The score is expertly utilized, and the soundtrack was more than noteworthy. Symmetrical scenes, contrasting colors, and melodious music all worked to elevate the film.

If only it was enough.

What makes the epic tome so effortless to read is the straightforward narrative and the constant narration of Theo. The live-action adaption ditches both of those.

The movie plays with the timeline in a way that is completely unnecessary. It jumps decades on the flip of the dime, only to go right back the past scenes without warning. Additionally, the bombing scene, which happens very early on in the book, is stretched throughout the entirety of the movie.

The constant voice of the narrator provides clarity and depth in the book. It takes basic scenes and aids deep themes and insights. The film almost completely forgoes having voiceovers, which separates the scenes like staccato vignettes instead of one seamless story.

The characters are okay, but it’s troubling when they are the high points of an all-around fantastic book. It feels like the production team really wanted to highlight Nicole Kidman’s Mrs. Barbour, presumably for an award season campaign. She gives a gorgeous performance, but the blithe decision comes at the expense of many other characters.

Two of the story’s most prominent women, Pippa (Ashleigh Cummings) and Kitsey (Willa Fitzgerald), are so insignificant it feels like they are hardly there. And Boris Pavlikovsy, the enigmatic, hilarious, wonderful creation played by Finn Wolfhard and Aneurin Bernard, is horribly underused.

In fact, a large amount of the substance of the book is forgotten. Sure, the scenes appear in the movie, but they don’t really matter. Everything feels both inconsequential and contrived. Even the climax is butchered by the movie completely nixing the emotional, introspective climax Theo has and pushes a less significant action scene as the pinnacle point.

All around the art is misused.

There’s a reason why A Starry Night is a painting, not a song. Swan Lake is a renowned ballet, not a poem. Art— memorable, truly good art—is birthed into the world in a certain form, the genre that it needs to be presented in so that the fullest extent of its message and impact can be achieved.

2014’s The Goldfinch won author Donna Tartt a Pulitzer prize for its command of the English language and harrowing themes. As a book, it worked because that’s how its art was meant to be received by the world.

As a movie, the story’s wonder is buried beneath empty content and quasi depth.