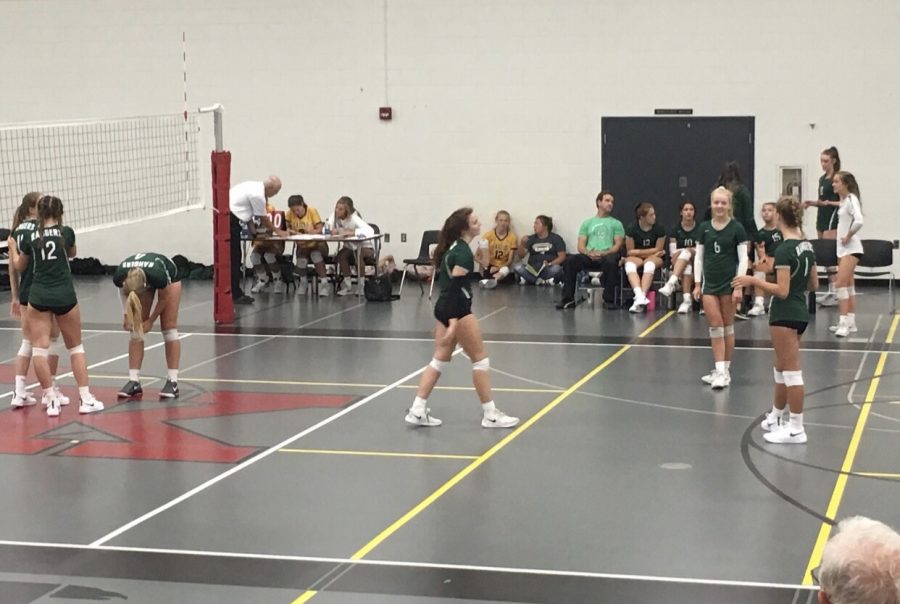 Sophomore Sophia Galan led the girls JV Volleyball team as it faced off against Forest Hills Northern—a long-lasting rival for FHC. The girls had just won a game against Cedar Springs on Tuesday and were feeling good about their level of play.

Head coach Natalie Roelfzema said that FHN has always been a tough opponent for the girls, and the Huskies created a great game and environment to play in. Most of the game of volleyball is made up of strategy, and the girls had to focus on making their execution perfect.

“It’s really trying to pick out where their weak spots are and hone in on them,” Roelfzema said.

Since the Rangers were ready and mentally prepared for this game, the girls won the first two matches. They were down early in the first match but came back to win 25-23. However, FHC had an easier time with the second match, winning 25-12.

FHN quickly scored the first four points of the first match of the game. The Rangers were struggling a bit with communication and covering for one another. Finally, the team got its first point on a nice set to Sophia for a hard spike. For a few plays following, the girls had a hard time with serving, which kept the Huskies in the lead.

After a long time of back and forth scoring, the Rangers caught up at the score of 23-23. The 23rd point was scored by Sophia, as she faked a spike and went for a light hit over the net. The girls were ecstatic and had a surge of adrenaline to win the next points. They went up 24-23 and finally 25-23 after an impressive, long volley.

The Rangers started out a bit slow but got the win in the end of a close first match.

“We had composure when we were down and stayed positive,” freshman Averie Zaschak said. By ending the first set like that, they were ready to come out strong in the second one.

Forest Hills Northern again scored the first point of the second match, but this time FHC responded with another point bringing it to 1-1. From there, the Rangers took the lead. Sophomore Gabby Partlo had a great block close on the net, making it 4-1. The girls were on a roll and kept scoring point after point. When the girls were at nine points, FHN finally received its second point. In this match, the Huskies never came close to catching the Rangers. They won 25-12 at the end of this match.

“I felt like in the first set we were a little dead and kind of quiet and not at our full potential of energy,” sophomore Ava Wilberding said. “But in the second set, we definitely came back stronger and with more energy.”

The girls did a great job at closing out this rivalry match. The cheers echoed throughout the gym as they won the second match.

“I was really proud of the girls that they just maintained their composure even though they were down and continued to push forward,” Roelfema said.

The next event for the girls is on Saturday, September 21 at 9:00 AM. They will be playing in the EGR JV Invite.