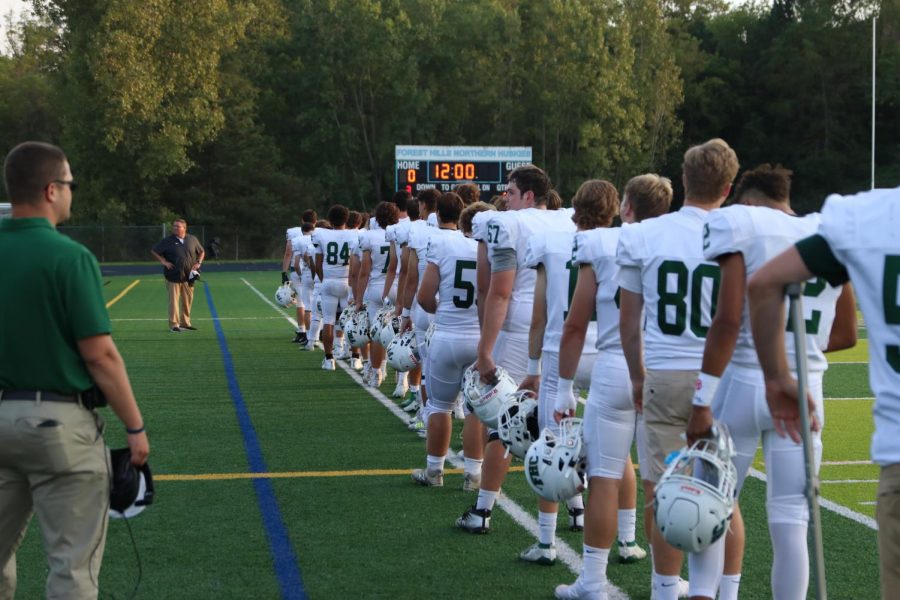 For the third consecutive week, senior Jimmy Scholler was a force to reckoned with under center, passing and running for a combined three touchdowns in each contest. Despite falling to Grandville last week 32-29, Jimmy scored four total touchdowns, and he carried over that confidence and momentum into this week against Forest Hills Northern, rushing for two touchdowns and passing for 1.

“[Jimmy] did a really nice job of distributing the ball,” head coach Tim Rogers said. “When he ran the ball tonight—and he ran it well—everyone did a good job of protecting him.”

While Jimmy and the offense did get rolling eventually, it took longer than usual for the Rangers to start scoring. FHC punted on the first two offensive possessions of the game, and FHN punted on its first possession as well. These long, unsuccessful drives drained the clock in the first quarter, but the Huskies received the ball with a couple of minutes to go in the first quarter.

While Northern did start to drive down the field, junior Jason Downey intercepted FHN’s Trinidad Chambliss at the FHC 47-yard line, giving the Rangers great field position heading into the second quarter. However, just inside of the second quarter as the Rangers were driving toward the endzone, the snap was muffed and Jimmy was unable to corral the football as he dove on top of it.

Fortunately for FHC, the defense forced the second punt of the day pretty quickly, and the Ranger offense flipped a switch. With great field position once again, a 26-yard reception from Jimmy to senior Hayden Sarjeant resulted in the offense knocking on the door at the FHN 4-yard line. Then, with 7:00 remaining in the half, the Rangers entered the score column first thanks to a 1-yard touchdown run from Jimmy.

On the next drive for the Huskies, the FHC defense forced yet another punt. After yet another poor punt, the offense took over at the Northern 43-yard line. The run game continued to flourish, and Jimmy scored his second touchdown on the ground with 3:50 left in the first half from 9 yards out, making the game 14-0.

The Husky offense struggled to cap off drives throughout the entirety of the night, and the next FHN drive was a perfect example of that. Just as the offense began to generate some momentum and drive down the field, something would go wrong. In this case, an interception from senior Jackson Clay ended yet another Husky drive, and the Rangers had another opportunity to score before the break, with two minutes remaining in the second quarter. Senior Will Gustafson nailed a field goal as time expired, giving the Rangers a 17-0 lead heading into the locker room.

“It took us a while to get going,” Rogers said. “It’s a very emotional crosstown rivalry game, but in the second quarter and half we proved what we could do on offense.”

After a punt from each team to start the second half, the Huskies finally found success offensively. With 6:11 left in the third quarter, a 16-yard reception in the endzone made the score 17-7, putting some pressure on the FHC offense to respond.

“We just need to work on our discipline and effort on every play,” Jimmy said. “We can’t let any big plays happen as [FHN] had too many.”

After a couple of successful runs to start the drive, Jimmy tossed up a deep fade to junior Jonah Spates, who made a leaping 35-yard reception over a Husky cornerback. Both last week and this week have seen the emergence of Jonah as a very threatening target in the air, and that is exactly what the Rangers need to keep a balanced offense.

“[The emergence] is big for our offense,” Jonah said. “It gives other teams someone else to think about, which will open up some of our other receivers.”

Despite success on the drive, it ultimately ended in a punt for FHC. However, on the other side of the ball, the Rangers forced yet another 4th down. The Huskies instead faked it on the punt, falling just short of the first down at their own 44-yard line and giving the ball back to the FHC offense.

After a stagnant performance on offense in the third quarter, the Rangers scored less than a minute into the fourth quarter via a 15-yard reception from Jimmy to Jonah, extending the lead to 24-7. For coach Rogers and the entire staff, developing a strong passing game early on in the season is a sign of good things to come.

Following a deep kickoff from Will, the Huskies were pinned inside their own 20-yard line on the next possession. After being hurt by some penalties as well as several stops and tackles for loss from the Ranger defense, FHN was forced to punt from its own endzone on 4th and 23. The FHC line pounded through the FHN front seven, blocking the punt through the back of the endzone, which caused a safety.

With the Rangers now up 26-7 with only eight minutes to go in the game—let alone FHC was about to receive the ball—the game looked all but wrapped up. Junior Carson Mocherman added to the fire on the ensuing possession, scoring his first touchdown of the season with 4:23 remaining in the game. With a successful two-point conversion and a 34-7 lead, the Rangers closed out the game with another successful stop.

“It’s always really important to win this rivalry game,” Rogers said. “Coach [Eddie] Ostipow does a nice job, their kids play really hard, and this is important to them. It’s great for the win column, it’s great to get a conference win, and it’s very important to beat your crosstown rival.”

This win puts the Rangers at 3-1 (1-0) and starts off the conference slate with a momentum-building rivalry win. FHC will need to carry over the energy to next week when they take on the Northview Wildcats, a team that beat the Rangers 33-0 last year.

“Last year, they beat us 33-0. We’re gonna have to go back and look at that tape and look and see what they did to us on offense and also figure out a way to get in the endzone,” Rogers said. “[Northview head coach] Trip Gallery used to be on this staff, and I know they’re going to be well-coached, so we’re going to have to play hard.

But for Jimmy, it’s not just about righting the wrongs of last year’s blowout loss; it’s about continuing the momentum and creating an exciting environment in the area about FHC football.

“It would be a great win four our team to keep our momentum rolling and getting the FHC community buzzing about this team again.”