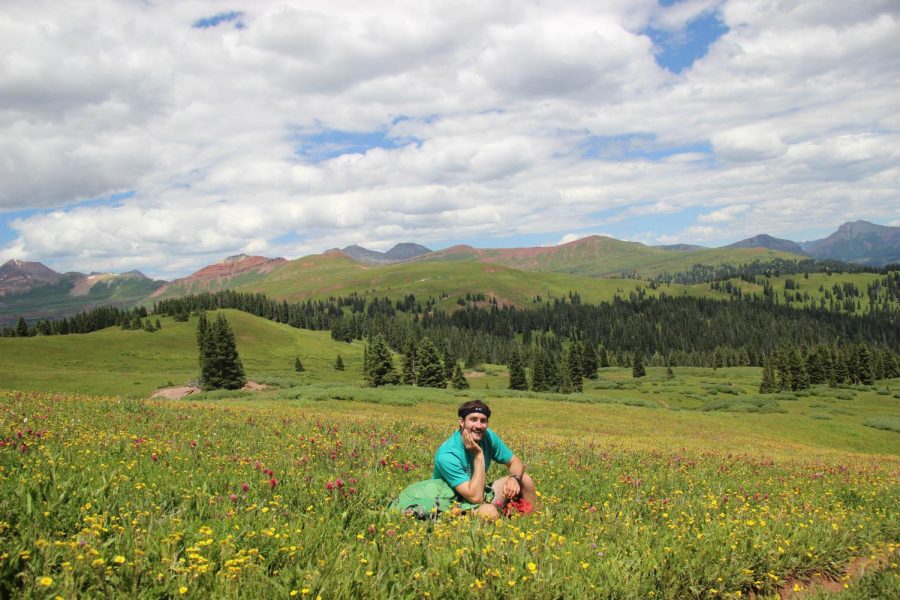 Andrew Belsito returns to Michigan from his adventures in Colorado to take over as the online teacher.

Andrew Belsito is good at math.

Really good at math, as in he got a 33-on-the-math-portion-of the-ACT-good.

In high school, when Belsito began to think about what he was going to do with his life, majoring in math seemed like the way to go. Lacking the experience he would later gain in other fields, and the understanding of himself that would surface in the years to come, all senior-year Belsito knew was that he could possibly make a career out of a subject he excelled in.

“If you would have asked me—this is going to date me—ten years ago what I was going to do after I graduated,” Belsito said, “I would have said that I wanted to go into business or finance or accounting.”

Belsito could see himself going down that path, but his friends and even teachers envisioned something completely different. His teachers, specifically, noticed certain traits in Belsito that they inhabited themselves, which sparked a conversation about a life deviating from the path he was set to embark on.

“When I was in high school, I think my teachers and my peers and my friends kind of recognized that I was someone who was mature for my age,” Belsito said. “With that, people kind of came to me or felt comfortable confiding in me. I think some of it goes back to my demeanor and the way I just kind of carry myself. I also had my teachers say to me, ‘have you thought about being a teacher?’”

The observations from his teachers—mentors who he deeply admired—stuck with Belsito and inspired him to seriously consider becoming a teacher.

“It’s very impactful to have someone that you look up to in a role tell you that you could be that role,” Belsito said. “That was a moment for me where I started to think about it seriously—can I see myself as a teacher? What would that look like?”

It would have nothing to do with math—the subject Belsito succeeded in.

“I took an unconventional route, as a teacher,” Belsito said. “I ended up picking the thing that I was not the greatest at as a high school student. When I got to college, I was like, yeah, math works, but it’s not that interesting. I, personally, find more interest in studying social studies or sociology or psychology. I didn’t want to do something that was easy.”

Finding more interest and excitement in social sciences, even though it was a tougher subject, Belsito began taking those types of courses and working towards earning his Bachelors in Social Science Education at Michigan State University.

Spending his entire life up to that point in Michigan, Belsito felt the urge to go—get out of “the bubble” that is Grand Rapids, get away from the same people he’s spent eight years of school with, and get his foot out the door in order to gain experience in the world of teaching.

“During my freshman year of college, I told myself that I need to get out,” Belsito said. “I need to get away from Michigan. I didn’t see myself developing as much as I would have liked to. I kind of felt myself in this cycle… like a broken record.”

Noticing this cyclical pattern of relatively no development of himself or his career, Belsito began looking for summer job opportunities where he could settle down for a few months—away from the constricting hands of Michigan.

Finding summer employment at a residential summer camp in Colorado, Belsito spent five consecutive summers working at this camp. For five years, he traveled between Colorado and Michigan until he was able to semi-permanently settle down in Colorado once he graduated college and earned his teaching license.

Making the decision to move across the country for a more extended period of time thrusted Belsito into new situations, new learning experiences, and new ways of adapting to a world with no familiar faces.

“Once I made the full jump to move out [to Colorado] and kind of started setting my roots down,” Belsito said, “[I] really [started] figuring out who I am and what I want for myself. I finally got out of that bubble: I’m not in Michigan, I’m not in Grand Rapids, I’m not surrounded by anyone I know.”

Belsito only needed to spend a few years in the obscure towns of Colorado, away from the cyclicality of his days in Michigan, doing some mild soul-searching before he felt comfortable enough to return home.

“I was finding that balance of, yes, I can be in that Grand Rapids bubble, but still be an individual person,” Belsito said. “I finally felt comfortable enough to move back home.”

Colorado gifted Belsito with a sense of self-awareness, which in turn gave him the confidence to set down his roots where they started—leading him to where he is today: the online room teacher.

Belsito spent the early years of his educational career attending Catholic Central, alongside Tim Rogers and Steve Passinault—Passinault being his principal and Rogers being his football coach. So when Belsito returned to Grand Rapids after spending time in Colorado, he was immediately interested in applying for a job at Forest Hills Central.

Emailing Passinault his resume, references, recommendations, Belsito presented the last five years of his life devoted to his career—his accomplishments, his experiences, his opportunities—in hopes of landing a job as a social studies teacher. Regardless of whether or not the position was even open, Belsito just wanted to present what he had to offer in addition to just putting his name out there.

“I’ve dedicated my life, up to this point, to working with kids and being an educator and a mentor and a teacher,” Belsito said. “I feel as if—and I felt as if—I had the qualifications to do these kinds of things, which is more so what I was selling when I reached out to [Passinault].”

Belsito didn’t land the position as a social studies teacher, but his name was on file and Passinault promised he would be contacted if anything else opened up.

A few months later, Passinault followed through with his promise: the position of the online room teacher opened up.

Throughout this whole process, Belsito noticed a sense of casual familiarity that didn’t present itself in any other search for a job. Because he had Passinault as a principal, and because many of his other family members had him as a principal, there was an undeniable sense of comfort.

“When I got the call for this position, to come in for an interview, it felt very casual,” Belsito said. “It felt like catching up with an old friend. It had an aspect of comfort to it. I didn’t really get the same kind of nerves I would get if I were interviewing or applying for a different job for a different district because there was that familiarity. It was really nice.”

Coming as more of a shock to get the follow-up from Passinault than actually landing the job as the online room teacher, Belsito began preparing for a new year in a new school with new kids to mentor.

The online room is not a typical instructional classroom, something that Belsito has taken note of.

“There is something about the traditional classroom that is very home for me,” Belsito said. “The online stuff is different because you don’t really get the same interactions with the kids because it’s all self-paced. They really just have to do everything on their own. Yes, I’m here to help them and, yes, I can support them when they need it, but it’s not the same as the traditional classroom.”

Each student is taking a different class independently, each on their own separate paths, so there isn’t one unified lesson plan.

Adapting to this quickly, Belsito has been working towards finding the balance between being a mentor—someone the students can look up to and come to for guidance in the same way that Belsito’s teachers did for him—and simply being someone in the room for each separate student.

“I see myself as more of a mentor, but I do recognize that, in this setting, with these online courses, it’s kind of a balance of [being a] mentor and just [being] someone in the room,” Belsito said.

With a new year ahead of him full of opportunities to expand upon everything he’s learned in his career thus far, Belsito is taking his new position seriously and is working every day to find the balance between mentor and someone in the room.

“I can mentor and help in any way that a student needs help,” Belsito said. “It’s kind of that combination of, yes, I am someone in the room—just as much as a lot of your other teachers are—but it is, in a way, up to the student to ask for help. I can only mentor someone if they are opening that door for me, if they are saying ‘I need help.’ That’s kind of how I see it. If anyone wants to share something with me, or has something they want to ask me, or needs help with something, I’m readily available to help them. I’m going to give it everything I’ve got.”