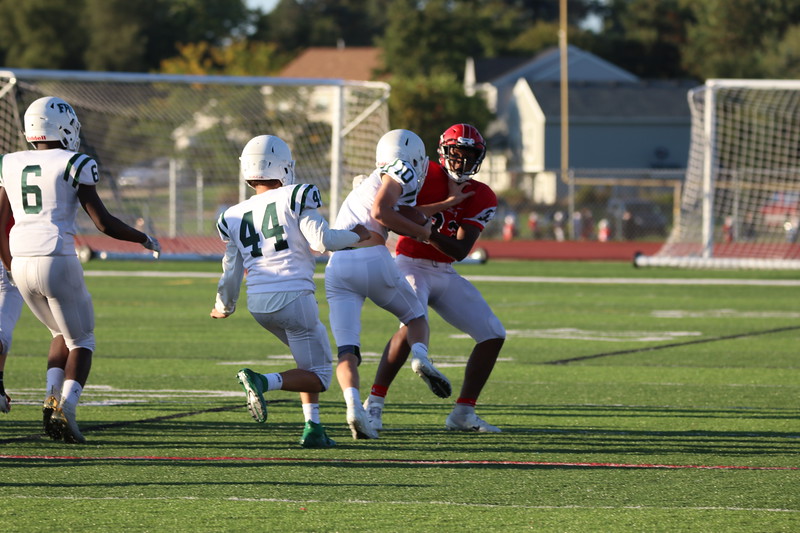 JV football battled the Northview Wildcats without their starting quarterback and running back. This adversity messed up their rhythm, but the boys still managed to pull out the win 7-6.

The game started off slow for both sides, and stayed that way for the remainder of the game. The Rangers were already without their star sophomore running back Tyler Weaver, who got pulled up to varsity earlier in the week. Because of this, FHC made an early game plan to progress through the air.

Sophomore Hunter Robinson started at quarterback for the Rangers and took the snap on the first offensive drive. As soon as he got the ball, Hunter decided to run it, but a stray Wildcat came and whipped him to the ground, snapping his collarbone and sending him out for the rest of the season. Although Hunter was a key part of the Rangers’ offense, sophomore Pierson VanGorp took a step up to quarterback and led the team for the remainder of the game.

The rest of the first half was a back and forth battle for both sides. Sophomore Quentin Rudolf was in at running back for the Rangers and allowed them to advance swiftly and steadily. Through the air, the receiving duo of sophomores Rhosius Arius and Conner Milton were essential as well and set up for multiple opportunities. In one of those drives late in the second half, the Rangers made a strong advancement which led to a rushing touchdown from Quentin.

After leading 7-0 at the beginning of the third quarter, the Rangers managed to keep up their energy. Although they didn’t score for the remainder of the game, they managed to stop the Wildcats and hold them scoreless until the last few minutes in the fourth quarter.

After 18 minutes of very slow football, the Wildcats got an opportunity at the goal line. Northview pushed the ball up the field hastily and managed to get a passing touchdown straight through the Rangers defense. With little time left, the Wildcats had a decision to make: will they take the extra point to tie it up and go into overtime, or do they try for the two-point conversion to beat the Rangers at home. They decided to go for the win with the two-point conversion,  but got stopped at the goal line. Sophomore Ivan Wheland was the hero for tonight’s game as he made the game-winning tackle and ending the game 7-6.

“I’m very proud of our guys for the mental toughness it took to get through this game,” head coach Ty Hallock said.

The Rangers are now 5-0 on the season and 2-0 in the OK White. Their next matchup is against at home against Cedar Springs on Thursday, October 3 at 6:30.