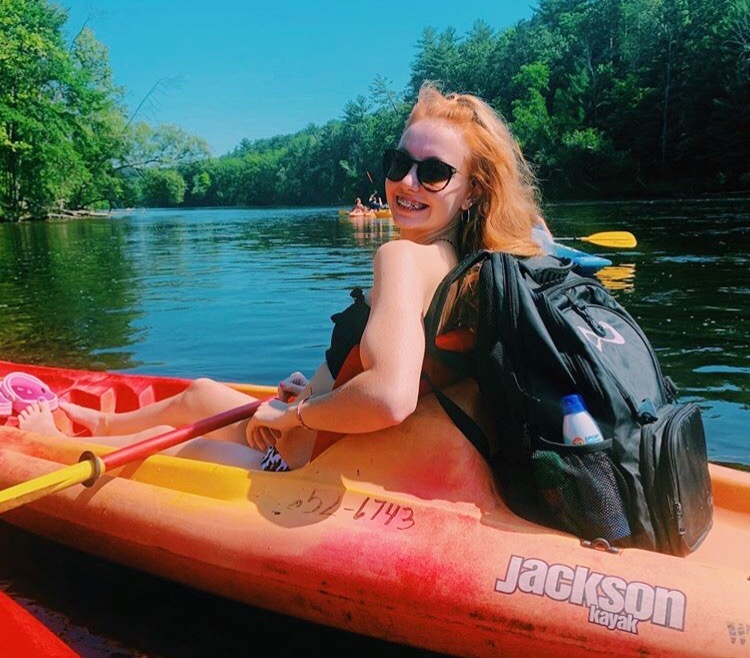 From Georgia to Michigan. From foster care to adoption. From practically an only child to an older sister.

Two years ago, Ashlynn’s life painted an entirely different picture than it does now. But the obstacles she has encountered along her path have led her into the arms of a family that she almost immediately clicked with.

“It was kind of an easy transition because my parents had really open arms when I first moved in with them,” said Ashlynn. “Probably [about] six months in we just had a really good connection. So ever since then, we’ve been talking about adopting.”

Adapting to an entirely new environment was nonetheless a monumental shift for Ashlynn. The tangible atmosphere itself was different; Ashlynn had grown up in a city, and her new family owned a farm in Georgia. But the family dynamic was another component she hadn’t been exposed to.

“At the time [I moved in] they had three other foster [kids],” said Ashlynn, “and then my little sister—their [biological] daughter. So I went from being the only little kid to being the big sister, and I was like, ‘whoa.’ But I think we genuinely had such a good attachment so early on [that it] really helped.”

The other three foster children were each adopted by other families, but Ashlynn maintained the bond she had formed with her parents and sister. And while Ashlynn’s parents have put fostering on hold for the time being, as they adjust to their new home, they hope to continue in the future, and their passion for it has been passed along to both of their daughters; they both hope to adopt their own children in the future.

“[She] was [nervous around] me when I first moved in, and I didn’t understand that,” Ashlynn said. “And I didn’t understand little kids either because I was like, ‘I don’t know; how do you work these things?’ But I think once we realized we were both kind of scared of each other, it kind of helped us, and now we can’t even go a day without each other.”

Ashlynn’s parents officially adopted her shortly before they moved from Georgia to Michigan for the beginning of the school year. The adoption process ordinarily would’ve been considerably longer—August 15 marked the one year anniversary of Ashlynn moving in with her family—but her parents’ out-of-state job opportunities fast-tracked the process.

The transition to Forest Hills has been relatively smooth, aside from the routine hiccups that accompany changing schools. Ashlynn describes FHC as “other than being bigger, pretty much the same” as her old school. One striking difference, however, lies in the way Ashlynn has been raised to express herself.

“People don’t really use manners here, [and] if they do, it’s a surprise,” Ashlynn said. “Here y’all don’t say ‘yes, ma’am’ and ‘yes, sir.’ And in Georgia, if you didn’t say that to your teachers, they would look at you like you were crazy.”

Ashlynn’s southern dialect has at times come as a shock to her classmates. Apart from the dissimilarities in etiquette, the way she pronounces certain words has caused an odd look or two be thrown her way.

But the benefits far outweigh the momentary confusion. Among other positive aspects, Ashlynn has found her passion for cheer reignited.

Since middle school, cheer has meant more than just an extracurricular to Ashlynn. Through it, she has been able to work out her pent up emotions. In many ways it has pushed her outside of her comfort zone, prompting her to meet new people and form new relationships.

Unfortunate injuries landed her on a break from cheer, but upon her switch to FHC, she took up the sport again. The team here has been an almost better fit than her previous school and blessed her in helping her break out of her shell.

Ashlynn devotes her time, both during the week and on the weekends, to a sport she deeply cherishes. Through conditioning, training, and time simply spent with her team, she has found a home in cheer.

It’s one of the multiple homes Ashlynn has found recently.

A tumultuous past has shaped Ashlynn into the person she is today. As she finds her rhythm in the people and activities she’s built up around her, she has created a space to work through her emotions.

There’s no questioning that Ashlynn maintains an innate spunk and character that she exudes in her daily interactions. She hasn’t lost sight of who she really is, always pushing to be approachable and very purely herself.