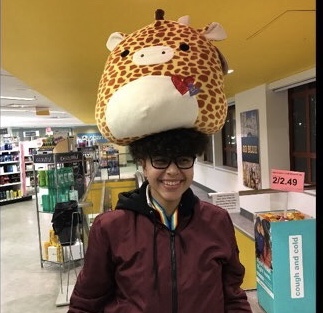 A misconception that junior Rebecca Dooley was happy to squash about debate is that it is always very formal— standing behind podiums, one-on-one.

Instead, the Political And Current Events club, known as the PACE club, that Rebecca is a member of formats their debates more casually in order to promote greater learning. Each meeting begins with an information session about a previously member-generated topic. Then, anyone can share their opinion or agree and refute others without much grandiose.

“Once a topic is introduced, everybody who knows anything of the topic, they share it with everybody,” Rebecca said. “So if you don’t know anything about it, you get a good chance to get a good grasp of what’s happening. I think it’s really important that students have an opportunity to learn about politics and current events in a semiformal setting—so, not like sitting down in reading ten articles. You can listen, and there’s always snacks.”

Rebecca originally joined the club around the time of the Parkland shooting. All the turmoil in the student body intrigued Rebecca, so she figured it would make for a very interesting meeting.

Besides that, Rebecca joined because it worked with her schedule. Even though she is quite busy, keeping up with the world is something she can always manage to squeeze in. The PACE club is just one way.

Model UN is another.

“I really enjoy just the experience of going to another city and being in the conference setting with other students,” Rebecca said. “ It’s really fun because we stay in hotel rooms, groups of four. It’s a good balance between academic life and social.”

Model UN is a first-semester class that Rebecca is currently taking that is based on research of world news and politics as well as some domestic issues. The class pushes students like Rebecca to take the facts and apply them to a conference forum.

While her passion for politics drew her to the elective, Rebecca has learned more than interesting tidbits about foreign relations.

“I think [Model UN is] a really good interdisciplinary skill,” Rebecca said. “You work on your language skills, your vocabulary grows, you also work on your interpersonal skills. Being able to talk to people one-on-one and in groups, it’s a really important skill. [Model UN is] a good mix of those things.”

As Rebecca said, these skills can be applied outside of Model UN, outside of school, and even outside of politics.

“I definitely use the skills that I practice at Model UN in real life,” Rebecca said. “So like at work, I talk to people [for] my job. I work at Panera. So, being able to casually interact with people definitely helps with my job.”

Outside of PACE and Model UN, Rebecca finds other ways to keep up with current news such as listening to podcasts on the way to school and daily emails from The New York Times. She feels that it is easy to follow current news through these simple things and that staying informed “isn’t an all-consuming activity.”

“It’s just a generally a good thing for all citizens, I believe, to be informed, especially since we are citizens of such a powerful and prevalent country and most of us are about to be voters,” Rebecca said. “So, it’s really good to be in the habit of informing yourself for making decisions.”

Rebecca’s already-acquired habit has guided her towards a future career: a lawyer. More specifically, Rebecca would like to be a civic lawyer.

Her goal in life is to help people.

“I’m really focused on humanitarian efforts,” Rebecca said. “So, I really believe that we should be helping other people in our company lives. We should be striving to not put each other down, but actually lift each other up.”

Other than that, there is just one other thing that Rebecca would like to change about society, and it relates directly back to her passion for politics.

“Our society as a whole needs to focus more on factual evidence as a basis for opinions instead of rumors or, you know, casual observations,” Rebecca said. “I think we should be more focused on the details and really informing ourselves before we form opinions, make decisions. [Being informed] makes people smarter.  If we try to stop this spread of misinformation or its emotionally charged content, I think we’ll be a more rational species as a whole.”