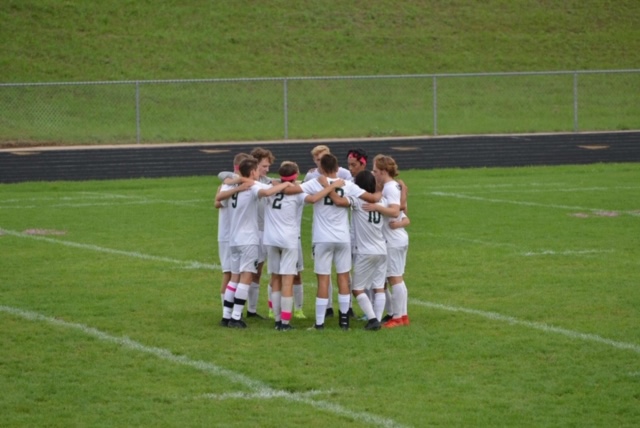 Coming off of a monster 3-0 win against the Cedar Springs Red Hawks on Tuesday, the boys varsity soccer team took a trip down to Portage Northern to take on the Huskies in a non-conference showdown. FHC would tie the Huskies in a battle to the very end, with senior JT Guntern scoring a goal with 3 minutes remaining in the game. The defense also held strong for FHC, as junior Matthew Mahoney along with seniors Ethan Hale and Richie Alvarez did a great job in the second half, shutting down the Portage Northern forwards.

FHC started out very aggressive, winning many 50/50 balls and setting the tone on both ends of the field. This play led to a goal from freshman Noah Gleason off of a beautiful cross pass from senior Sammy Postlewait. As the game progressed, the Huskies started to settle in and get more opportunities on offense. Portage Northern forward and Western Michigan University commit Levi Crooks gave his Husky teammate a beautiful cross pass for a wide-open shot in the box.

The Huskies controlled the momentum for most of the first half, shutting down the Ranger offense and turning good defense into offense at the other end of the field. Levi attacked the net later in the half to go up 2-1 with just minutes remaining. FHC struggled to stay organized on defense, and as a result, they went down a goal going into halftime.

The Rangers and the Huskies went back and forth to begin the second half. FHC’s defense came to play, with senior goalie Kyler Williams making some big-time saves to keep Portage Northern from going up 3-1. Richie and JT did an excellent job playing balls to the middle to get more offensive opportunities for the Rangers. The great play in the midfield resulted in a free kick being drawn from the Rangers approaching the final third. Sammy lasered his shot from the stoppage straight to the keeper, but the shot was too much to handle for the goalie. After being bobbled, JT knocked in the rebound, giving the Rangers a late goal to tie the game up and eventually end the game in a 2-2 draw.

The draw on Saturday puts FHC at 5-5-4 overall on the season. The Rangers now shift their attention to a showdown on Monday when the East Grand Rapids Pioneers come to town. To win this rivalry game, the team will need to win the majority of the 50/50 balls and stay consistent on defense.