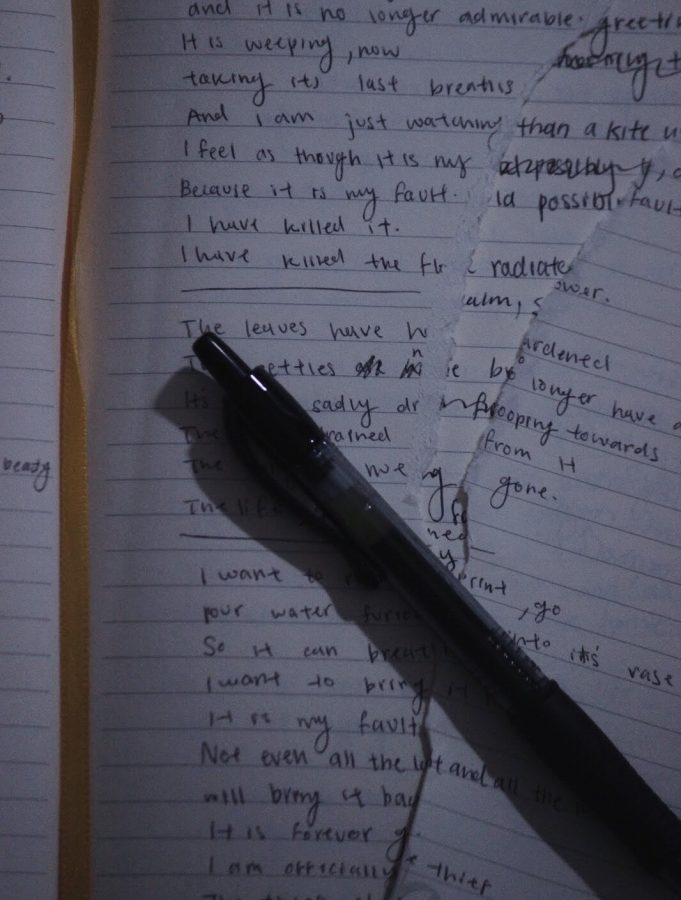 A look towards my bitter reflection

From where I laid—on the floor of my room, adjacent to my window—not even a glimpse of what raged outside my window interfered with my vision. However, what my sight lacked, my hearing compensated for, for beyond the wall beside me, an insolent howl intruded the air.

An unforgiving storm it was, and I allowed the deafening crackle of the untamed tempest to smother my conscience.

I focused on the constant downpour of rain, observing how tragic the earth’s tears sounded—a desperate, limp sob. The stream of rain fell so suddenly and so effortlessly that I questioned if the clouds even tried to hold in the rainwater. It seemed each cloud unleashed its weight without a fight. Mother Nature waved her own white flag, and this obscure miasma was her way of communicating defeat.

Yet, an occasional bright flash penetrated the darkness. Each time the lightning struck, my eyebrows raised slightly, compelled by curiosity. In the midst of the harsh downpour and dim night, the occasional brilliant shock of light looked, dare I say, beautiful. It was undoubtedly destructive, yet I loved the brief, white flickers that flooded into my room.

Restless from the endless current from the sky, I stood up after lying on the floor for who knows how long. I stood on my toes and stretched my arms and my back, watching the tree’s branches whip in the wind. And amid it all, the crow still remained unfettered outside the window, but this time, I simply turned my head and looked away.

I looked over, and in the grim lighting, my new notebook practically called my name. So, I dragged my body to my bed. After not having a notebook for nine days, picking one up again to write felt like a breath of fresh air. The lined pages had a distinct smell that was my home, and I let out a small smile as a result of picking up my pen. Oh, how I loved the familiar grip of it.

However, I sighed and looked at it longingly after remembering how empty it was. It’s like the universe merely threw my past out the window, disregarding it entirely.

I refused for that to be the case, so I opened it up to the first page, allowing the paper to be a haven for my thoughts.

I love you, but I hate you. There’s a storm outside right now, and it reminds me of you. It reminds me of the time we sat in my room together, and you told me how storms are beautiful. The loud claps of thunder and their destruction made me cry, but you claimed that “destruction is a form of creation.” That’s the difference between you and me: you smiled at the rain because the chaos never intimidated you, and I admire that but could never react the same way.

But the storm also reminds me of you because, like the wind outside, I’m angry—actually, furious—that you left. I miss talking to you and playing cards with you and hearing you mock the neighbors. How could you leave everything behind?

How has the chaos never completely shook your world? I don’t understand. I wish you could tell me how to be brave. This storm is overwhelming, and I’m not referring to what’s happening outside my window anymore.

I set both the book and my pen down, shuddering from the cold.

The stillness of the air was almost haunting. I was completed surrounded by solitude and a lack of movement. I strained my ears, but the night held its breath, afraid to make any sudden movements that would disturb the earth.

I almost disregarded the uncomfortable lull of silence, until I picked up on a quiet yet distinct chatter coming from outside my room. Careful to not expose myself, I gingerly tip-toed to my door, slowly placing my ear against it.

“I’m scared for her,” Mama whispered. Scared for who?

“I know,” Tata replied. “We just have to give her time. She has to come to an understanding first.”

“I know.” Tata sounded grim. I cringed in response to how negative his voice sounded; its unfamiliarity caused a chill to travel through my body.

“You need to teach Mila to love the world, not hate it. She’s so young, and she shouldn’t hate people for what they cannot change.” Me? How could she think I hate the entire world? “War elicits people to act cruelly, but that doesn’t make them cruel people.”

War elicits people to act cruelly, but that doesn’t make them cruel people.”

I looked at my notebook but quickly looked away, realizing my own contradiction.

“You don’t think I know that?” Tata’s voice rose, now. Mama almost immediately shushed him. “I’m sorry,” he continued, whispering again. “We’ll try our best, okay? This is a difficult time, and she’s just trying to find someone to blame.”

Impulsively, I opened the door.

“Mila,” Mama said, obviously startled. “Why are you—”

“I couldn’t sleep,” I already knew she was going to ask that. “Mama, I don’t hate the world.”

“Oh, Mila, you know I didn’t really mean that,” Mama said, frantically putting words together to console me.

I began tearing up, unable to cohesively put my thoughts together, and Mama and Tata bent down, embracing my frail body. The wind continued to groan, and the thunder frightened me every time it disrupted the silence. Each time the lightning struck, I reflexively looked back towards my window, seeking for the crow.

“Let’s get you to bed, Mila. It’s too late to have this conversation,” Tata stated.

I didn’t refuse, allowing Mama to lead me to my bed and tuck me in like I was a little kid again. Her touch felt soothing amid the violent space. She kissed my forehead and let out a pleasant and warm “goodnight” while graciously smiling, even though I could tell she struggled to do so.

I watched her leave my room and waited a few seconds before picking up my notebook.

I’m sorry. I’m trying to understand, and I know that might be hard to believe.

I sometimes don’t believe my own effort, but I’m trying. I just have to find a way to dispose of this pent up hatred.

I sighed, set it down, and stood up to open my window. I stepped backward, staring directly into the raging storm.

I looked into the tree, and to my surprise, the branches were barren. The bird seemed to be gone. The terrible nuisance had left me alone.

Without the root of my despair, I had the beauty of the world all to myself again, yet for some reason, I didn’t feel the rush of peace that I would expect with it gone. The disappearance of this bird was supposed to be my solace, yet I didn’t feel free nor content. The bird was the source of darkness, yet I couldn’t see any glimpse of light.

I felt the same. Maybe worse.

The storm continued to whip and seethe outside my window, and the misery of the bird remained, despite its absence.

I continued to feel the agony of the crow beyond its dismal grave.

I closed my window and sighed, looking up. But when I did, I was merely greeted by my own reflection. And in the tarnished glass, I did not see myself. Rather, all I saw was the amalgamation of an innocent girl and a pitiful creature.

Tata walked into my room. “I don’t hate the world, Tata. I hope you believe me,” I said, looking pleadingly into his eyes.

“I know, Mila,” he said once more and sat down next to me on my bed.

I looked up at the window again, and I simply shuddered at the woeful sight of my grim complexion.