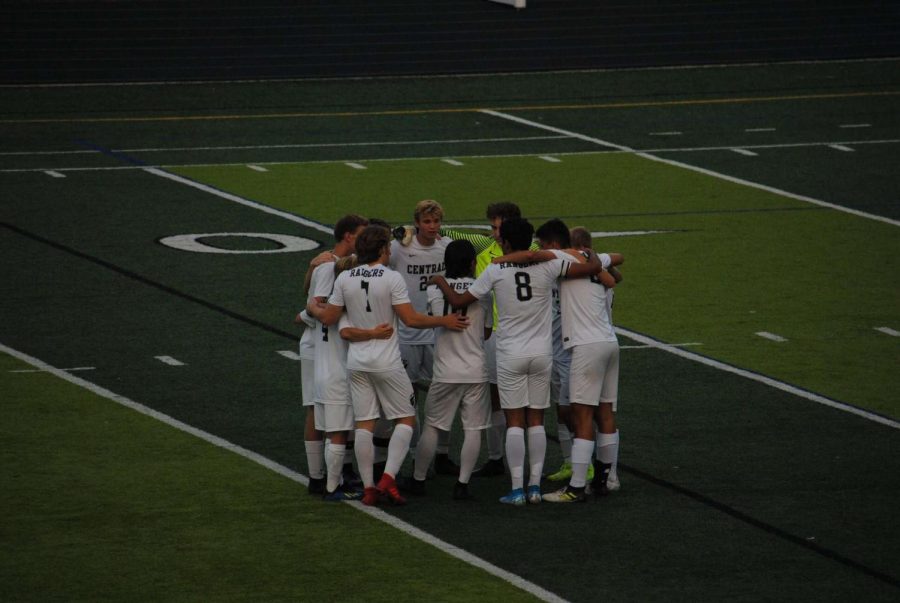 A goal from senior Sammy Postlewait just under four minutes into the game would set the tone for an excellent game overall, as the boys varsity soccer team defeated East Grand Rapids 2-0. Sammy continues to put on a show offensively, as this is now his 11th game of the year in which he has scored a goal, but his first goal tonight was the most important in order to capture this rivalry win.

“To be honest, I thought scoring early would actually be a detriment, “ head coach Paul Kramer said. “It pulled the guys out of the mindset of what we’re trying to do defensively. We didn’t net them, but in order to net them you need opportunities, and we got those tonight.“

The two teams started off by going back and forth, but FHC quickly gained the momentum with Sammy driving through the defense per usual. This led to a goal from Sammy just a couple of minutes into the game to get the confidence going for FHC. For Sammy, he wasn’t expecting a goal like this to fall this early in the ball game.

“I was a little shocked, to be honest, “ Sammy said. “I hit it and I wasn’t sure if it was going to go [in]. I was very relieved when I saw it go in because it gave us a lot of momentum.”

As the first half progressed, FHC started to get a lot more looks on offense. Senior Micah Gschwind always seemed to be at the net to try and score. However, the tide quickly turned and suddenly FHC was on the defensive. EGR started to settle in offensively and moved the ball around well on both sides of the field, but the Rangers were eventually able to get scoring chances as the half was winding down.

Without a strong midfield, the opportunities that Micah and Sammy got offensively would not have happened if the midfield did not win the majority of the 50/50 balls. Seniors Richie Alvarez, JT Guntern, and Dani Ahmetovic were big in stopping EGR from getting the ball to their quick forwards at the end of the half. FHC went into halftime of a defensive battle with a 1-0 lead over the Pioneers. The Rangers knew before the game that energy and the fundamentals had to be the key to finish off EGR in this rivalry showdown.

“Coming into the game, I knew we had to win,” senior goalie Kyler Williams said. “I was focused on getting good distribution from me to our offense to create chances at the goal.“

FHC came out with tremendous energy on both sides of the ball to start the second half. The defense from the Rangers really created some great offense at the other end of the field. This great play from all 11 Rangers resulted in another goal from Sammy on a corner kick.  FHC took a 2-0 lead and didn’t look back defensively. Senior Ethan Hale along with juniors Matthew Mahoney and Mason Corcoran did a phenomenal job of stopping shots taken by the Pioneers as the half went on. For Mason, the goal was to help his fellow defensemen in order to prevail in the game.

“My goal on defense was to continue to try and continue to help Kyler and Matthew,“ Mason said. “Especially because of our formation [and] mostly everything starts with the defensive side.“

As EGR got more opportunities down the stretch, Kyler was a big factor in allowing the Rangers to keep the shutout. Williams’ kicks down the field opened up opportunities for the midfield to win 50/50 balls and get some offense going.

A promising sight for FHC was the depth that came off of the bench Monday night. Sophomore Zane Guntern played some great balls and was very aggressive on the offensive end. Senior Fadi Muallem did a great job in chasing down balls and dishing some nice passes to the fellow Ranger forwards. FHC finished the complete game and won the game 2-0 over EGR.

This win puts FHC above .500 at 6-5-4 overall on the season. The Rangers now jump back into conference action against the Ottawa Hills Bengals Tuesday night. To win, the Rangers will need to stay consistent defensively.