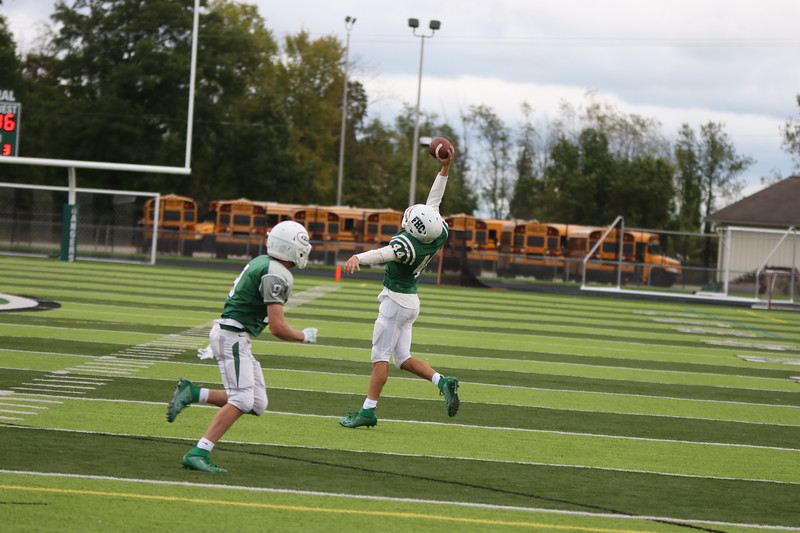 Cautionary measures taken because of the EEE virus forced the game times for the underclassmen’s football games to be pushed up this week. Because of the limited time frame, the JV and freshman teams were forced to combine against Cedar Springs’ JV and freshman teams. These unusual circumstances allowed the two teams to have their first opportunity to play with each other this year. This was a good experience for the teams, as it prepared them for later in the year where they will be combining once again to play against Greenville. The combined Rangers beat Cedar Springs 25-16 behind an explosive offensive performance from sophomore Rhosias Arius.

“This was a really fun game to play,” said Rhosius, who had all 3 touchdowns on the night. “We all played very well despite the opposing talent and odd circumstances. It was a good experience and definitely gives us an upper hand when we play Greenville in a few weeks.”

The game opened with an onside kick from the Red Hawks, which had a high bounce that Cedar managed to pounce on before the Rangers could touch it. The Red Hawks then drove down with their powerful, grinding run offense until they scored with a 22-yard run. They then secured the two-point conversion and quickly started the game with an 8-0 lead.

Cedar Springs once again attempted the onside kick, but the Rangers were ready for it and jumped on it before the Red Hawks could reach the ball. In one of the first plays for the Ranger offense, pass interference was called on the Red Hawks, giving the Rangers prime field position on the Red Hawks’ 35-yard line. The Rangers continued their push, bringing them to the 25 before Cedar Springs was called on another pass interference, pushing the Rangers to the 10-yard line. With incredible field position on the first down, the Rangers were called for a false start, making it 1st and 15. The next play, the ball was snapped to freshman quarterback Levi Mackenzie, who threw to Rhosias for the Rangers’ first touchdown of the night.

After the kickoff, the Red Hawks immediately got to work. They continued their shifty run play, driving down the field and pushing through the tough Ranger defense. The Red Hawks scored off of a short run and secured the two-point conversion, making the score 16-7.

The Rangers then received the kick and took off from deep in their own territory. After a few plays that secured moderate gains, sophomore Pierson VanGorp threw a beautiful over-the-shoulder pass to Rhosias, who sped away and scored his second touchdown of the game.

“I was really proud of Rhosius and his performance tonight,” Pierson said. “It was fun to see him play the way he did tonight. He carried us with 110 yards and allowed a huge upper hand on Cedar.”

The Rangers then gave Cedar a quick taste of their own medicine: an onside kick. The Red Hawks recovered the kick and began their short drive. After several plays, the Rangers had the first fourth-down stop of the game, forcing the Red Hawks to give up the ball.

Taking the ball, the Rangers quickly got to work. Levi threw a 35-yard pass to sophomore Conner Milton, who was another key player in Thursday’s game. After a couple of modest gains, Levi threw another beautiful pass to Rhosias for 25 yards, scoring his third and last touchdown of the game. The Rangers decided to go for two and converted with a pass to sophomore Ivan Wheland.

To start the second half, the Rangers kicked off to the Red Hawks. Continuing their improving defensive play, the Rangers effectively stopped the Red Hawks, forcing them to give the ball away. The Rangers took the ball and began to steadily move down the field. Levi threw another pass to Ivan, who caught it with a miraculous one-handed grab and ran it for a 20-yard gain.

At this point, the Red Hawks tightened up their defense and the Rangers were forced to kick a field goal on the two-yard line. This concluded the third quarter of the game with the score now 25-16 in favor of the Rangers.

The fourth quarter was characterized by strong defensive play on both sides, as the Rangers stopped the Red Hawks and vice versa until the game was concluded by FHC stopping Cedar once again as time ran out on the clock.

The game concluded 25-16 with strong performances on both sides, as the JV team’s record was brought to 5-0 and the freshman team’s record was brought to 3-0-2. The Rangers split into their regular teams next week as they face off against two different teams. The freshman boys play against Grand Rapids Ottawa Hills at home on Thursday, October 10. The JV guys, however, play against South Christian at home on the same day and are looking at keeping their undefeated streak alive.

“Our team really rallied around one another tonight,” head coach Ty Hallock said. “Although it was a difficult situation, we made the most of it and that is exactly what we asked our guys to do. It was fun getting everyone in, and that might have been one of the better games we played here in the last couple of years.”