Cedar Springs dominates varsity football on both sides of the ball, wins 30-6 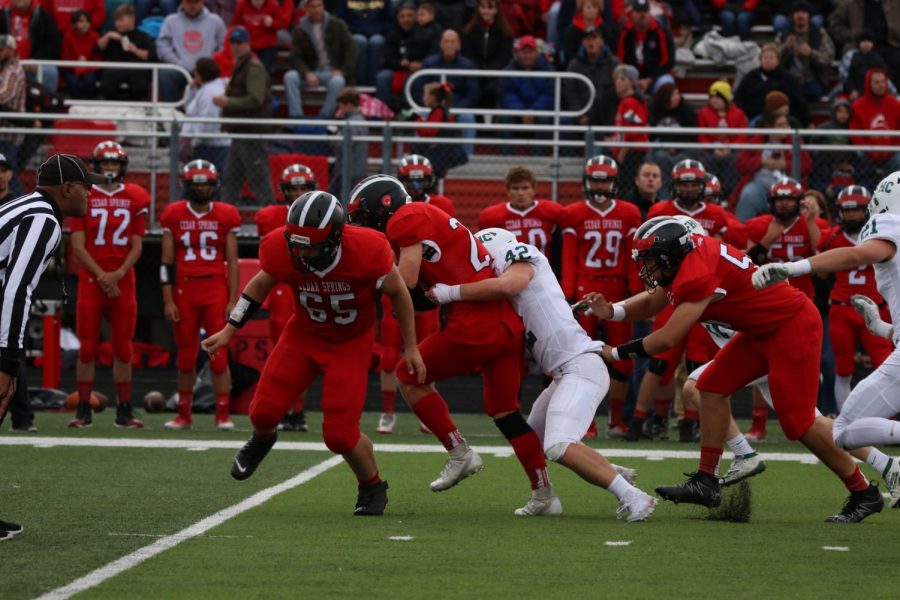 The absence of starting quarterback senior Jimmy Scholler due to a concussion was a crucial one, as the FHC offense could not garner any momentum whatsoever as the Rangers fell to Cedar Springs 30-6. The Rangers were held to just 134 yards on offense and turned the ball over three times, giving the FHC defense no help as both sides of the ball struggled.

Both of these highly-praised teams came into this game with a 4-1 record, with Cedar Springs beating quality opponents like Northview and Allendale with high-scoring offensive shootouts. Including Friday’s win over the Rangers, the Red Hawks have scored at least 30 points in each game this season bar one, with three of them resulting in at least 45 points for the Cedar Springs offense.

With the FHC defense being heralded as one of the best in the conference after giving up no more than one touchdown in each game leading up to this contest besides Grandville, the story for this game looked to be the matchup of the powerful Red Hawk offense and the suffocating. However, what truly stood out on Friday was Cedar Springs’ ability to direct the entirety of the game from start to finish.

The Red Hawks run an offensive playstyle similar to Grandville’s with them running a Block-T instead of Grandville’s Wing-T. This offense means plenty of running the ball and confusing plays that look very similar to each other, and the Rangers struggled to shut this down in the first half against Grandville. However, after the FHC defense got comfortable and knew what to expect, the scoreline improved greatly amid the many defensive stops. With the late success, the Rangers were hoping to carry this over to Friday’s contest.

The Red Hawks got on the board for the first time with 2:27 to go in the first quarter off of a 17-yard pass from junior quarterback Jeremy Campione.  After being scored on—and before the fact—junior quarterback Carson Mocherman and the new look FHC offense couldn’t get much going. With poor pass protection at times combined with the Red Hawks’ very talented defensive line, Carson was forced into many high-pressure situations under center. Until the second half, the Rangers were forced to punt over and over—and that was if the ball hadn’t already been turned over.

After two more clock-draining offensive possessions that resulted in touchdowns on the ground, Cedar Springs went into the break leading 24-0 after three successful two-point conversions. The boys knew they needed to pick things up quickly, or this game would get even uglier very fast.

On the opening drive of the second half, the Ranger offense looked like itself, marching down into Red Hawk territory. A 33-yard pass from Carson to senior Hayden Sarjeant resulted in a touchdown, cutting the Cedar Springs’ lead to 24-6.

Following the momentum-building offensive drive, the Red Hawks depleted all and any available momentum and time. Starting the drive at their own 11-yard line, Cedar Springs took over 11 minutes to drive down the field and eventually score a touchdown, giving them the final score of 30-6.

While the FHC offense had its struggles, the Ranger defense didn’t do much to help FHC’s case, giving up 309 yards just on the ground. Teams will look to exploit this in the future, so the Rangers will need to clean this up ahead of their late-season conference matchups, as well as they head into the playoffs.

With this loss, the Rangers fall to 4-2 (2-1) on the season. While this conference loss certainly hurts the Rangers’ chances of a conference title this year, with a matchup against a talented Lowell squad on the horizon for Cedar Springs, FHC could potentially pull off the title with a couple of favorable results. However, the focus for the team is currently on Week 7, in which the Rangers will look to pick things back up against Ottawa Hills.