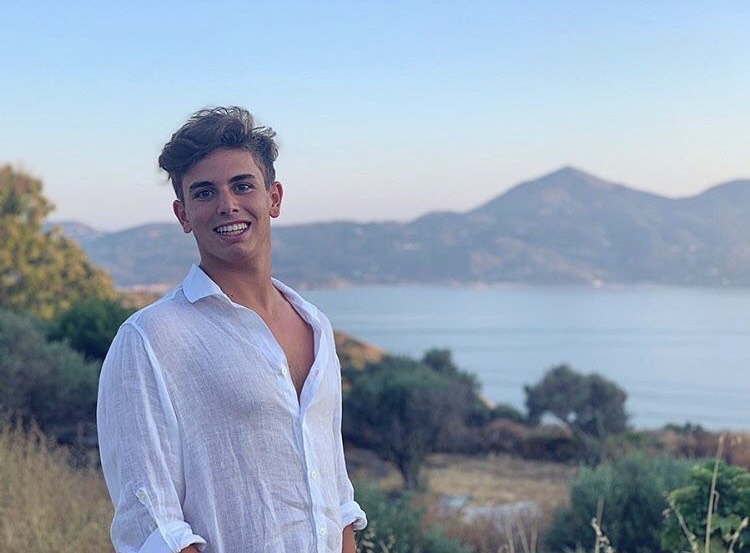 Underneath the beaming white lights that illuminated the student body, senior Francesco Roveri—a speck among a vivacious sea of predominantly strangers—cheerfully joined the bright, lively roar of the student section during a Friday night football game.

And despite being a staggering 4,398 miles away from his home in Manza, Italy, Francesco was delighted to become friends with his animated peers in the crowd, to contribute to the energy, and simply laugh.

“I think I met all the seniors [in the student] section in ten or fifteen minutes,” said Francesco, who is staying with a host family for ten months as a foreign exchange student. “I really love football and staying in the student section with the other guys, having fun with them, and cheering. I’ve never had this problem of [being] shy, and I really like the kids that are here. We laugh a lot when we hang out.”

Francesco arrived in the United States in August, shortly after the beginning of the school year. According to him, football games are only one of the many joys that have helped him settle into Grand Rapids, specifically for one reason: the people associated with them.

This camaraderie of the students in the school, he says, is one of the aspects that Francesco hoped for before arriving here.

“I came here to try to get out of my comfort zone for a long time without my family and without my friends [and to] see how I can react [to] things,” Francesco said. “But I mean, for the moment, I like it because I’ve found a lot of new friends here. I really like this place. It’s really different from Italy. It’s not exactly how I expected it, but I really like it.”

However, the main reason for his venture across the world is to strengthen his English language skills, hoping to increase his fluency for the benefit of his future in informatic engineering. Immersing himself straight into a life enveloped in this language, Francesco said, was the best way to learn it.

So far, his experience with the educational focus of his ephemeral time here is among the many differences between the United States and Italy that is prevalent. Along with transitioning from kissing his friends on the cheek to a fist bump or high five, Francesco’s habitual schedule has transitioned from having one class with the same people for five years to having six different classes.

“Here, I don’t know how exactly it works, but you can choose your classes,” Francesco said, “[which] in my opinion is better. It’s more fun. I expected that this school would be different, and it is really different.”

In all six of his classes, the grade levels of the students vary, as well. Therefore, Francesco has built connections with sophomores, juniors, and seniors, and he says he notices there’s a lack of communication between the different grade levels.

Despite this disparity of classes, Francesco continues to befriend many who come his way.

“Maybe [knowing] all of the school is too much,” Francesco said, “but I really want to know a lot of people because I want to make new friends, a lot of new friends because a friend means you have someone who you can talk to. I think that friends is one of the first things that a normal child must have.”

When Francesco departs in June, he will leave behind the people and the football games and his classes; however, he believes that the experiences that will occur over the next few months, as well as further down his life, will alter him.

Thus, his time here will be a part of him perpetually.