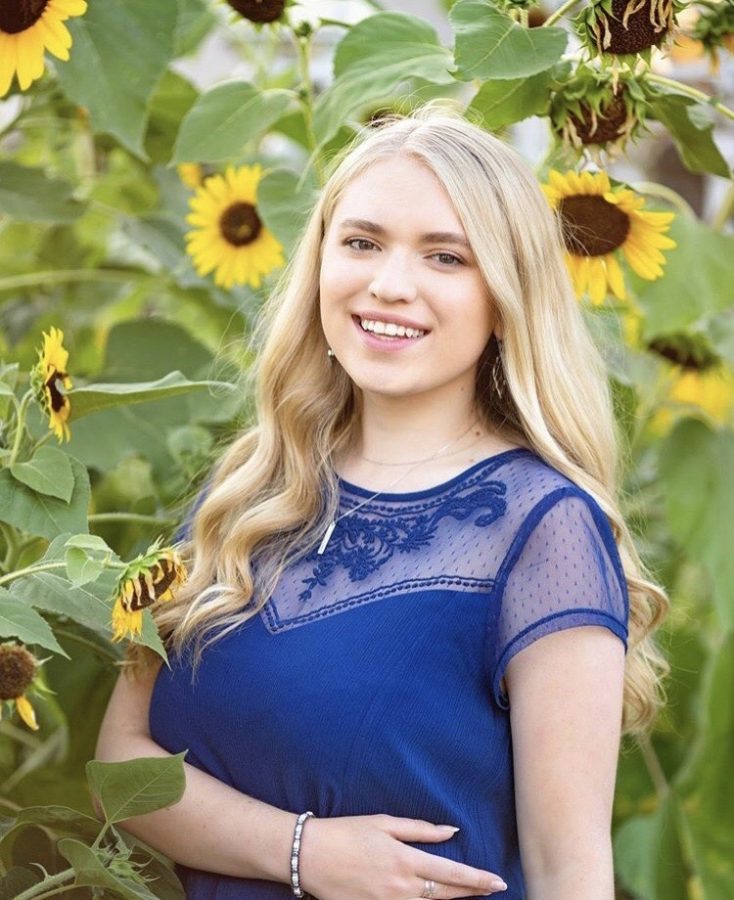 “I was really surprised. My friends and a lot of people during the week were like, ‘I voted for you,’ and that was super flattering because I was like, ‘wow, that would be cool if it did happen,’ but I was obviously not expecting it. I just remember all of my friends literally screaming and people tapping my back, and it was just so much at once, and it was such a cool feeling.”

“I started shaking pretty quickly. I’m used to nerves before going on stage for something, but then [with that], you’re with your castmates, or you have people around that you know and are used to, so being called up in front of your school unexpectedly is a lot. I was really happy, though, and I was touched. Everyone was so nice and kept telling me ‘you’re so nice, and I’m so happy that you got it,’ and it made me really happy that I’m spreading a little bit of happiness.”

“When my sister was nominated in my freshman year, I was like, ‘wow, her class loves her, and they want to express their love.’ Now, being in that position, it doesn’t feel real that people voted for me because they like who I am; high school is very scary, and I always feel like, ‘am I doing this right?’ or ‘am I doing that right?’ and somehow throughout all the ups and downs, people were like, ‘she’s still a good person.’ I guess the purpose of Homecoming Court is… I don’t know. It’s who you want to thank, I guess. That’s how I saw it my freshman year. It’s kind of crazy.”

“It feels like I’m in a simulation. It feels like everybody just straight up pulled an Uno card on me, like, ‘surprise!’ Honestly, it feels so amazing just because I am so honored to be on Court. I love everybody else on Court, and it’s just so cool to see your peers be like, ‘hey, we really like you.’ It just means a lot to me that people took time out of their day and decided that they wanted to vote for me out of how many other names? I don’t know.”

“It feels so weird honestly. We’re about to go into this week of activities, and suddenly, I’m getting a lot of emails from Brad Anderson [whom] I never had as a teacher, and it’s very scary because he scares me. I think he can tell from my body language [that] I’m a coward. *Laughter* I’m surviving, adapting, and overcoming I guess. It feels very weird because its the last time we’re all together… I don’t know how to answer that! I’m just very scared because suddenly, there’s a lot of things that I have to do, and I am not ready for any of them. I have to go be at the Ranger Rumble apparently. I don’t know what’s happening. Yeah, it feels very different now that I’m a senior. The end.”

“I’m very, very excited. I think it will be really fun. I’m paired up with Aaron. Aaron Jachim. We went from freshman year [Theatre Department] Tony [Awards] to possibly—well if the mosquito thing is dealt with, and we get a hard frost—we might be riding in a convertible together. It’s kind of crazy to go from little freshmen looking up to the seniors to now. I’m very excited to be on Court. I love everybody else on Court. I’m just so excited to hang around them all for a hot sec. They’re all such great people, and I am honored to be a part of that.”

“I know Aaron Jachim—I would say—very well. We’ve been in theatre since freshman year together, and it’s been such a crazy ride. I’ve seen him grow so much, and he’s just such a great person, and he makes me laugh so much. It just means so much.”

“Are you kidding? I have so many—I can’t! I need to see a school roster list. Well for one, Sarah Tiggleman who is an angel from above. She did theatre with [me and Aaron]. Your list is going to be too long to add them all in. Ella Guikema who is my fellow leader. All of my band friends like Lindsey Cool, are you kidding? I love Rachel Cooper. I love Olivia Throop. I love Megan Raisch. I love too many people to do this right now. I’m really stressed—Courtney Collar and Katie Woods. I love so many people. I love Cole Kaminski. I love Matt Henriksen and John Courcy. I’m really stressed right now. I’m going to forget someone, and I’ll feel so bad. I’m going to cry. Oh, oh, Meredith VanSkiver, Sarah Buchanan. I’m trying to go through my classes, but that won’t be enough. Wait, wait, wait, I’m thinking. I’m thinking. Oh! Anna Breaugh. Anna Breaugh! Laura Salas. I can’t even name them. I’m trying to go from organization to organization, and there are too many people for me to name. I don’t think this question should be put in because it will be the entire [article]. Susan Toppen would like to recognize everybody. Also, Elise Rapeyko. I haven’t really known her well through high school, but this year she has been so kind to everyone and has been making such an effort to be friends with everyone and really just have fun and express herself, and I think that’s the coolest thing. And many, many more that I did not name that will be very aggressive that I forgot [them].”

“If I was queen, I would make a pact to bring a croissant [to school] every first Monday of the month [during] third hour. I would eat that croissant and share it with one other person. Croissants for all! I don’t know. I think that every single person on court is so deserving. I literally don’t have a campaign promise because I would be the happiest person in the world if anybody on Court got queen. Literally anyone. I love them all so much.”