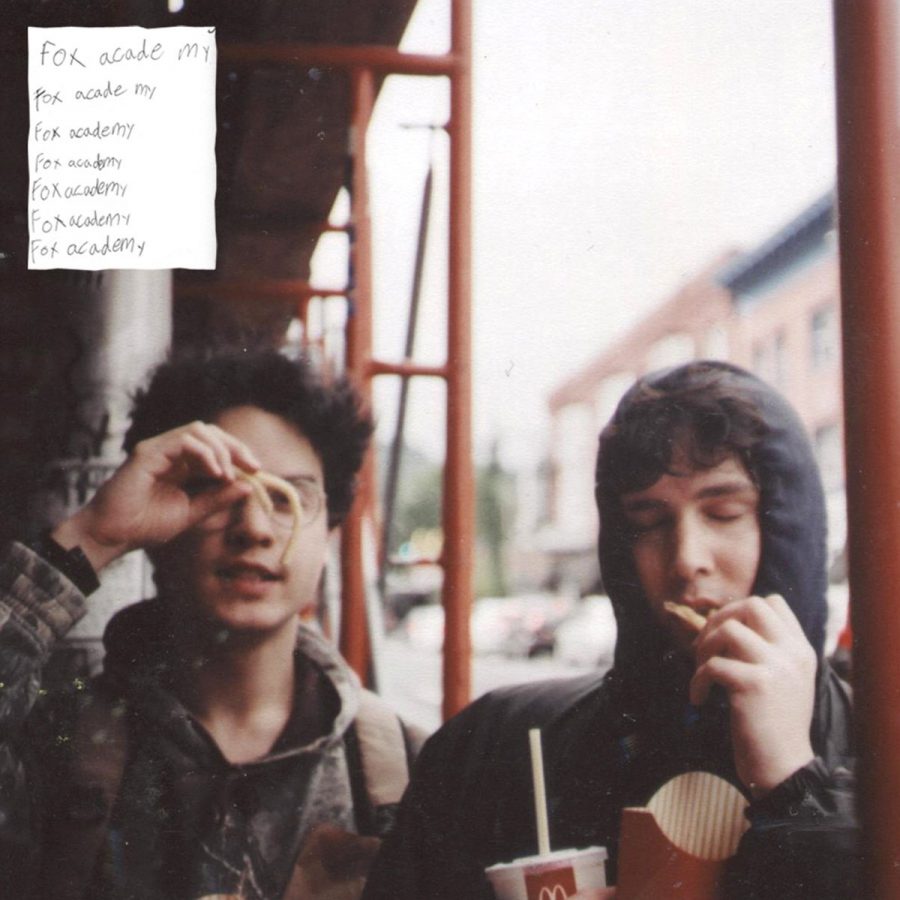 Two CapriSun juice pouches stood at my side, resting against a bowl of a few too many Goldfish. I sat dead-center on my couch with my laptop balancing on my right leg. Fox Academy’s newest album Angel Hair was sprawled across my screen staring at me. Nice snacks and new songs— I was in a moment of low-standard serenity. I took a deep breath and clicked play.

Immediately, I could tell this album would be a lot less gold and a lot more fishy.

“Metal” opened the door for me, but it let it hit me on the way in. This album didn’t just leave me disgruntled, it started me off feeling that way. “Metal” was cold, rusty, and scant.

Fox Academy’s singing style is what I like to call “mumble music.” You have to listen very, very, very closely in order to hear and process the lyrics. I listened so closely to “Metal” that I had to stop chewing my Goldfish.

All you need to know is that I started chewing again before the song was over.

“My Fun” isn’t even worth three sentences. It was that bad.

I decided that I was entering this album-listening session feeling too judgemental. I cleared my mind and told myself that I would listen to “Apple” all the way through before making any judgment. So, I hit play.

The name made me start thinking of Gwyneth Paltrow’s daughter. Did you know her name is Apple? I wondered how life was treating Apple and if it was difficult to live life with such a name. I was so encapsulated in the repercussions of naming your daughter after a crisp fruit that I didn’t even process the song. It provided a tolerable soundtrack to my daydream, but it didn’t garner an iota of my attention.

Apple, if you’re reading this, I hope you’re doing better than this song.

I’m not even ashamed to admit that I daydreamed my way through “Popeyes Bag,” “Costume,” and “Absent.”

“Blue Heaven” was good. I could close my eyes and listen without cashing in a one-way ticket to lala land. ‘Good’ was a low bar to meet, and I realized that this song wasn’t even that good. I was just feeling so sympathetic that I needed to attach some positivity to something. “Blue Heaven” wasn’t the right song; it was just in the right place at the right time.

“Lobby” and “Property Brothers” both failed to meet my basement-level expectations previously met by “Blue Heaven.” Something about this music just felt so blasé. I didn’t know such a unique, idiosyncratic group could even sound blasé, but I’m glad that this album at least gave me a scrap of knowledge even though no enjoyment was served alongside it.

“Sick Day” was a disappointing close. It was so bad that it almost made me physically ill. This song made me realize that the only viable reason that this album was so insufferable was that the production team probably took too many sick days themselves. Perhaps this song was an homage to that.

Looking back on the album, I was so distracted by my own imagination that I can’t really paint an overall theme for this playlist. It was just white noise. It was something to close my eyes to.

Angel Hair made beautiful elevator music, but I really wish I had taken the stairs.