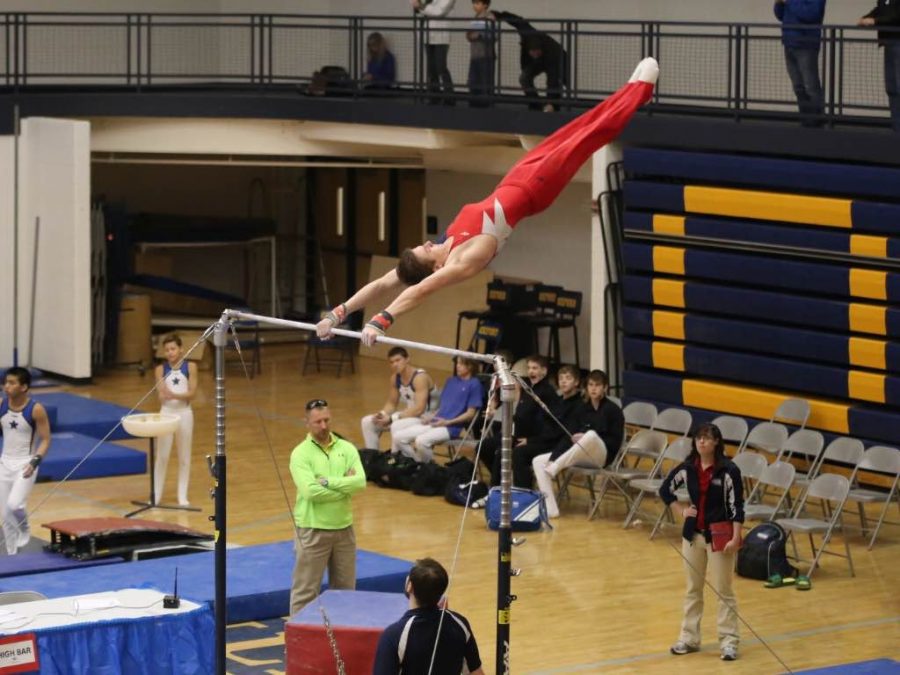 Tucked off of Cascade Road and next to Watermark lies Grand Rapids Gymnastics, a place for gymnasts to train, learn, and do what they love. Junior Levi Boluyt is one of many gymnasts here, and his determination and humble nature make him stand out as a dedicated gymnast and person.

“He was 7 years old, strong, and climbed everything. A friend was doing gymnastics so he tried. Within 2 months, they asked him to join the team,” said Jodi Boluyt, Levi’s mother. “Next thing you know, 9 months later he took 1st in the state for his level and age group.”

Levi’s career in gymnastics started off quickly, with him gaining skill at a rapid pace.

“My parents, family, and friends have some kids that are doing gymnastics, or were [when I started,]” he said.

Levi started his gymnastics career at a gym called A&A, which was changed to GRG (Grand Rapids Gymnastics) after a change in ownership. He is now a Level 10 gymnast and is coached by Joe Swinehart.

“Levi is a quiet person, but you would never guess that he is also an adrenaline junkie. He may be quiet most of the time, but when he attempts a new skill, he becomes loud(ish) and smiles from ear to ear,” Swinehart said. “Whether it is from the rush of the skill or the excitement from being one step closer from succeeding in a challenge, all I can tell you is that he is happy at those moments. As happy as any kid could be.”

Many people may not be aware of his accomplishments due to Levi’s quiet and humble nature, but he is an extremely skilled gymnast. He has placed very well in his age group and more.

“He’s been 1st in the state more than once, 4th in a 5 state region and has come very close to qualifying for Nationals more than once. But his greatest accomplishment, in my opinion, is [being] the great role model he is in the gym for all the younger boys to look up to,” Mrs. Boluyt said.

Levi is far from the type of person to show off, although he has more than the ability to. He is determined, strong, and intelligent, with a GPA of 3.95. Although he has not qualified for Nationals yet, it is very difficult to do so. He has been awarded the All-American award in gymnastics, by far no easy feat. On top of this, he is a role model for younger gymnasts.

“We use to have to bribe him to show off when family or friends wanted him to do some trick. He would never join the talent shows no matter how hard I pushed,” Mrs. Boluyt said.

Levi is very passionate when it comes to gymnastics, and his determination and drive to learn new skills lets him overcome any difficulties that come his way.

“He is an intelligent kid who loves a good challenge,” Swinehart said. “He has high goals but stays grounded on what he can truly accomplish.”

He is also taller than the average gymnast, which can make some things more difficult for him. However, certain things are easier for him due to his height.

Although pommel horse is more difficult for Levi, he still manages to be 11th in the region in that event. His favorite event is floor, which is usually recognized as the “flashiest” by spectators. Swinehart says that Levi is very skilled when it comes to high bar, p-bar, and floor.

As a passionate gymnast, Levi finds freedom and enjoyment in gymnastics.

“I like how… free you feel. It sounds kind of cheesy, but you can pick what you do and there’s a lot of innovation and improvisation,” he said.

Levi’s drive and determination continuously build him up to be the best gymnast he can be, and his prowess in academics and gymnastics lends to him being an inspirational role model for GRG’s younger boys. Levi finds expression and happiness through gymnastics, and remains humble when others will boast.
“Levi, as a gymnast, is so strong and dedicated to the sport. He amazes me every time I watch,” Mrs. Boluyt said.