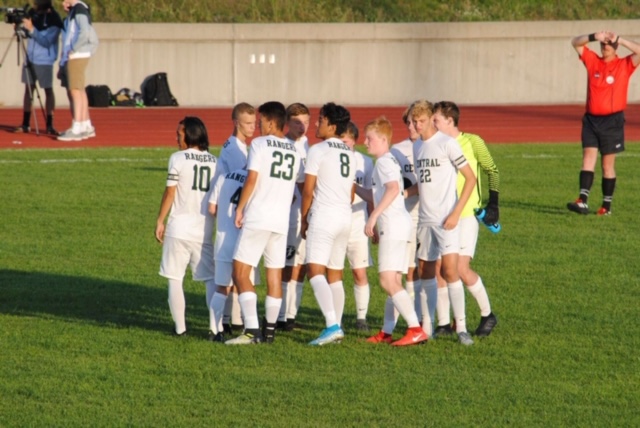 In their first district game, the boys varsity soccer team took on Ottawa Hills for the third time this year. Once again, the team defeated the Bengals 4-1 in an offensive showcase. Senior Sammy Postlewait played another phenomenal game per usual, scoring 2 goals and dishing out some nice passes. The sophomore duo of Sam Yeager and Ben Taylor would complete the scoring for FHC en route to the team’s first postseason win.

The first half was a strong start for FHC. Sammy got off to a hot start on the offensive end by getting opportunities for his teammates, while guys like senior Micah Gschwind were threats on offense. When Ottawa was so focused on covering multiple Ranger forwards, this created a great opportunity for Sammy to drive right to the goal and score early.

This goal from the senior star allowed FHC to get more comfortable on offense. Sammy was able to drive in once again and put another goal in the back of the net to go up 2-0. The Rangers went into halftime feeling confident about the game plan on both sides of the field.

As well as the offense looked, the defense also looked very solid. Senior goalie Kyler Williams made some huge saves to keep the Ranger lead at 2-0. This lockdown defensive performance turned into great offense on the other end, as Sam and Ben were able to score their goals. Towards the end of the game, the Bengals were able to get on the board with a goal to cut into the Ranger lead. The clock expired and FHC won the game 4-1.

This win puts the Rangers at 9-6-4 on the season. FHC now shifts its attention to it’s biggest game yet, as they take on the #1 ranked team in the state, the Okemos Chiefs on Tuesday. The margin for error will be at its lowest for this game, as the Rangers will have to be near perfect in order to pull out a victory and continue their season.