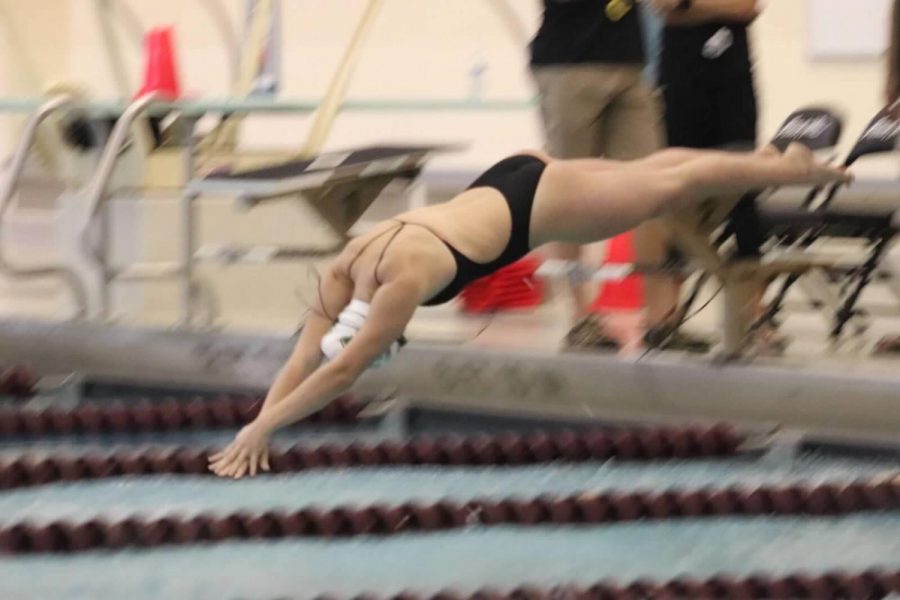 Senior Sarah Schenck and the rest of the seniors led the girls swim and dive team to a stunning landslide of a win against the formidable Jenison Wildcats 101-79 this week. This was a dual meet for second in the conference, as both teams had equal records of 3-1 going into the meet. This meet was very important to the conference standings as the Rangers began to wrap up their dual meet season.

“I was really pleased with how the team performed tonight; we stepped up and did some really amazing things,” said head coach Dennis Neat in regards to how the Rangers responded to the challenge Jenison presented.

This meet was given some extra importance due to the fact that this meet was the last home meet for the seniors of the team: Rachel Douma, Olivia Jeong, Olivia Luplow, Sarah Schenck, Hailee Sincerbeaux, and Maggie Zorn.

“It was generally just pretty exciting, really fun, and I loved how the whole team came together and won,” said Sarah on her experience with Senior Night.

The meet began with the 200-yard medley relay team winning with a time of 1:54.22. This team, consisting of junior Olivia Hooper, sophomore Jessica Doyel, Sarah, and sophomore Maggie Hier, beat Jenison by over 5 seconds, starting the Rangers off strong and gave a taste of the many other victories soon to come.

The next race was the 200-yard freestyle. Olivia Luplow and junior Ellie Field took first and second, with Olivia securing a season-best time. Olivia’s time was 2:04.23 and Ellie’s time was 2:06.06, beating Jenison’s swimmer by just a half a second.

Following up this win was a first-place finish from Maggie Zorn, who swam a time of 26.16 in the 50-yard freestyle. Maggie beat the runner-up from Jenison by just .05 seconds in this fast, incredibly close race.

Beginning at roughly the midpoint of the meet, the diving event was the first loss for the Rangers, with first place being taken by Jenison’s Abbi Morse by a considerable margin. However, the second, third, and fourth places were won by freshman Olivia Thornley, freshman Payton Dailey, and Olivia Jeong. This made up for the loss and prevented much of a swing in momentum as the meet progressed back into the swimming events.

The 100-yard fly was the first event after the diving, and this was won by a large margin by Sarah Schenck with a time of 1:01.79. This quick victory was followed up by a first-place and second-place finish from Maggie Hier and Maggie Zorn in the 100-yard freestyle. Their times of 56.57 and 56.99 were more than enough to hold off Jenison and take the first two spots.

The next race was the intense 500-yard freestyle. At the beginning of the race, Sarah Schenck took it out fast, but by the end had been caught by the next two and had to push for a final sprint to the end. Sarah took first in this event with a personal best time of 5:36.27. Jenison took second, and Ellie Field took third with the time of 5:37.03, making the first three places dramatically finish within less than a second of one another.  This finish brought excitement to the team as they continued their winning streak in the swimming events.

Next up was the 200-yard freestyle relay. The Ranger team of Junior Emily Johnson, Jessica Doyel, Maggie Zorn, and Margaret Hier won this event with the time of 1:46.44. This led to perhaps the most dominant race of the meet, where all three top places were won by Rangers. Olivia Hooper, junior Sarah Chesner, and Maggie Hier took first, second, and third, respectively, in the 100-yard backstroke with the times of 1:02.92, 1:05.56, and 1:05.59. This was an incredible performance from the Rangers and led to the decision to exhibition the rest of the races.

Jessica Doyel had the best time in the 100-yard breaststroke, but it was exhibitioned. Her time was 1:11.50, almost 4 seconds faster than Jenison’s fastest swimmer in the event. Finishing out the meet was the 400-yard freestyle relay, which was won by Jenison. This meet solidified the Rangers’ spot as second in the conference, only behind East Grand Rapids, a powerhouse in swimming.

“I think I can speak for the team and myself that we were all pretty happy,” sophomore Avery Verlinde said. “I mean when you are going against the team you are basically tied for second in the conference with, it can be pretty nerve-wracking, but we did well.”

This brings the Rangers to 4-1 in conference play, with only two more dual meets to go before the finals begin. Next week, the Rangers face Spring Lake away.