Jenny Baer is starting off her senior year in the spotlight 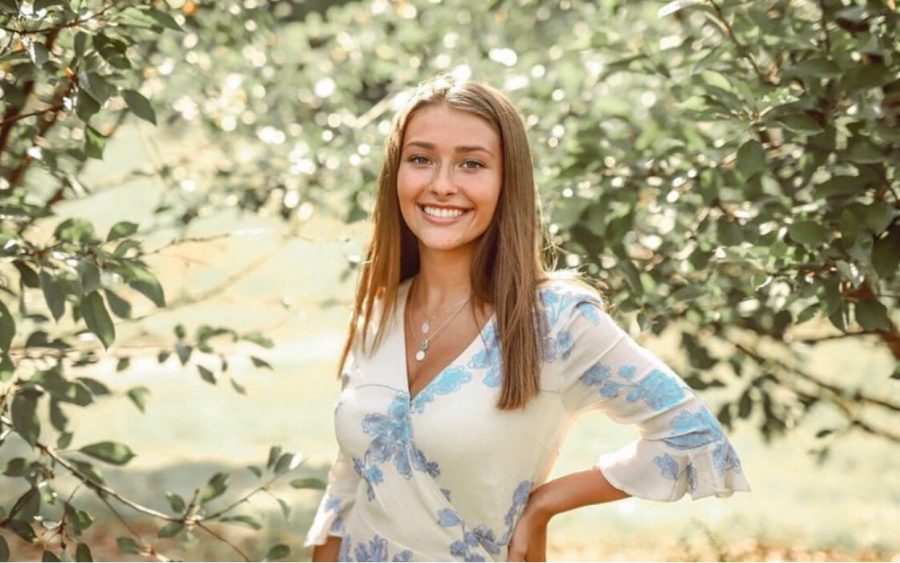 When senior Jenny Baer’s name got announced in front of the entire school last Friday, she didn’t even process it at first. It wasn’t until Mr. Labenz asked if she was even at school that day that she stood up and descended the bleachers.

“I was so surprised,” Jenny said. “I actually kind of had a hot flash, and I was so scared. And then I stood up, and I was shaking when I was up there. I was so nervous. I hate being in front of people. It was such a big shock.”

Jenny was chosen as one of five girls, along with five boys, to be a part of the Homecoming Court. The group of ten Rangers get to ride in the parade and are presented during the halftime of the Homecoming football game, as well as being featured in multiple Homecoming assembly activities.

Jenny is very excited about the opportunity, though the spotlight scared her to a degree.

“The parade and all the games and stuff are [going to be] so fun,” Jenny said. “I feel like it’s a little nerve-wracking for me just because I don’t like being in front of people. But it’s really fun and really exciting, and I feel like it’s rewarding to the people that are on Court.”

Even if she wasn’t honored with a place on Homecoming Court, Jenny expressed that she has a deep love for the fall dance. In fact, she said she prefers it over the other two dances.

“I love dancing, and I love homecoming more than any other dance,” Jenny said. “It’s so much more interactive, and we have so many more assemblies and stuff like that.”

Homecoming is indeed filled with more hype-up activities and all-around grandeur. One of the newest additions to the festivities is the Ranger Rumble assembly.

The assembly, which took place this past Monday, included every single school in the Forest Hills Central District. It was held in the football stadium, and high school and middle school students walked there while elementary students were bussed in.

One of the many activities that occurred at the assembly was the presentation of the Homecoming Court. All ten of them walked out to applause and then were able to sit up front for the remainder of the assembly. Jenny was worried about the wide age variety of the audience, but she ultimately thought the Ranger Rumble was a success.

Another fun aspect of Monday’s assembly was the first annual pie eating contest. Jenny remembered fondly the fact that Court got such a good look at all the pumpkin pie eating action.

“I thought the pie-eating contest was really funny,” Jenny said. “Court got a front-row view. We were on the ground, and I could see Mr. George putting his face right into a pie with goggles on.”

Typically, the nominees for Homecoming King and Queen are individuals who are genuine and involved individuals. Something Jenny has been involved with all of high school is the girls’ tennis team.

“I just love it,” Jenny said of tennis. “It’s super competitive, and I’m kind of a competitive person when it comes to sports.”

Jenny, who spent two years on JV and last year was pulled up to varsity, has made many strong connections with the other girls on the team.

“You kind of get close to [your teammates] because you’d done it for so long,” Jenny said. “Last year, I got a lot closer to them because as we travel on the weekends; it’s always so much fun getting to know them.”

Though Jenny is grateful for her time spent playing tennis, she regrets not getting involved in even more. In fact, the one piece of advice she’d give to underclassmen is to get involved with as many extracurriculars as possible.

“If you can, like if you have time,  join whenever you can because, honestly, I wish I would have joined more things starting as a freshman,” Jenny said. “I’m not very into being in front of people. But, I would just love to get closer to people that are [like] that because they’re all super nice, and I like that about them.”

Jenny thinks that these types of people are well represented in her fellow Court members.

“Everybody on Homecoming Court is involved in everything,” Jenny said. “They’re all sweethearts. I literally sent them pictures of my dresses [for the Homecoming parade] last night. I’ve never been so hyped up in my life. They were all so nice, and I wish I would’ve just gotten to be closer with them earlier.”

Jenny may feel that she lacks the intense involvement or comfortability in front of a crowd that the other nine seniors on Court have; however, it’s evident in her final piece of advice to underclassmen that she’s a kind and friendly student who others can look up to.

“I just recommended being nice to everybody, and try to talk to someone new,” Jenny said. “Even if you don’t know them, just have like a simple conversation or just compliment something on them or anything. Just be nice to everybody.”