Anna Breaugh embraces risk in theatre and reward in volunteering 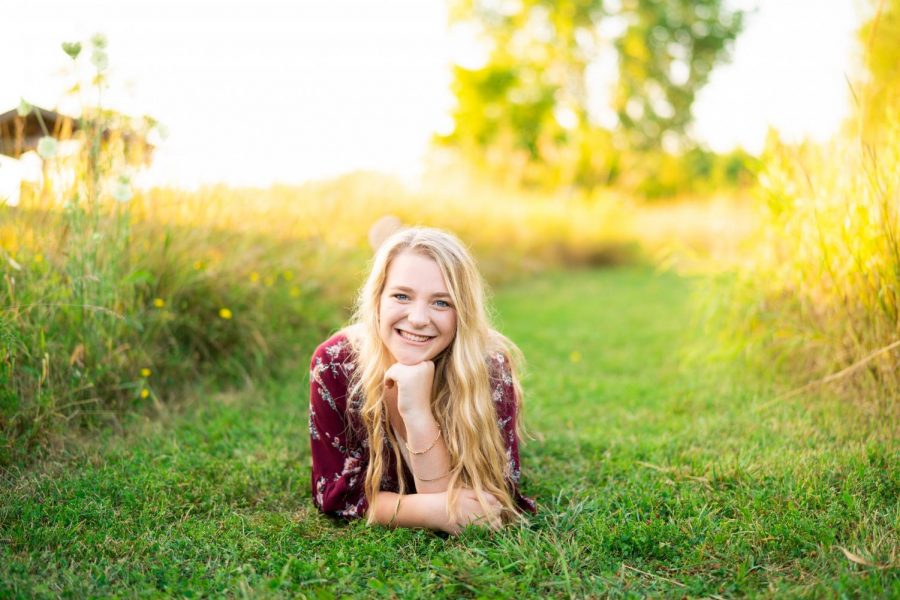 A poised, aged figure steadily emerges from behind the coal-colored curtains that perimeter the side of the spacious, decorated stage. The click of her heels bring to light the utter silence that is present within the theatre as she approaches the various actors located towards the center of the stage. The elderly, respected citizen confidently voices her line and slowly turns over her right shoulder to survey the engaged and large crowd. The citizen, Rebecca Nurse, will be portrayed by senior Anna Breaugh in the production of The Crucible this fall. And, this will shortly be Anna’s reality.

Involving her role, Anna is rather nervous about portraying the sole calm character in the play. The entire population of the Massachusetts Bay Colony experiences complete hysteria during the play, and Rebecca Nurse serves as the “moral compass” and “angel” to the citizens.

“It’s [going to be] really hard to act without acting,” Anna said. “I’m working on it, and it’s fine, but everyone else gets to scream. Rebecca is a seventy-two year-old woman, so I’m like, ‘Oh okay, guess we have to do that situation.’ But, I’m just really happy to get the opportunity [to play her].”

Anna’s goal when auditioning was to simply get into the production. Therefore, she was more than satisfied with the remarkable role she received. She first dipped her toes into the program last year as a junior; she was a townsperson in the fall play, Ramona and Beezus, and a chorus member in the musical Joseph and the Technicolor Dreamcoat. As to why Anna decided to join theatre, she credits the members of the program.

“A lot of my friends had done Peter Pan, and I was like, ‘I mean, sure, why not?’” Anna said. “[Theatre has] a ton of people that I like, and I love theatre, so I just tried for it. The bond you get with people after the countless rehearsals and all of that type of stuff is just so fun. It’s all been exciting to talk [to] and find other people that I normally wouldn’t hang out with.”

Besides friendships, Anna has also gained experience in stepping out of her comfort zone and taking risks from theatre. She has learned to be unafraid to attempt new things, and she enjoys playing with the different ways that lines can be delivered.

“Our directors are always like, ‘Go more rather than less,’” Anna said. “They can always tell you to tone it down, but they can’t keep telling you to amp it up.”

Although Anna is no longer a rookie when it comes to theatre, she is when it comes to the Central Singers. This year, she auditioned for and made the prestigious choir, and she was inspired to join the choir through the talent last year’s group exhibited.

“I love choir,”  Anna said. “I have done it for a really long time. The reason I couldn’t do it last year was because of my schedule, and there was no way that I was [going to be] able to wake up that early and do all of that stuff.”

For her senior year, Anna was fortunate enough to have a less cramped schedule, and therefore, was able to join the Central Singers. Although waking up an hour earlier than she is used to has just begun to take a toll on Anna’s awakeness and alertness throughout the school day, she is motivated to get up each morning to go to practice all because she loves singing.

“I love the people in it, and you get to do a lot of really cool songs,” Anna said. “I’ve done official choir since sixth grade, so I’ve been doing it for six years now. I always really liked singing when I was young. Choir has always been super fun, so I keep doing it.”

Through Central Singers, Anna has discovered an abundance of friendships and jokes. Since each of the members are arguably sleep deprived when the class starts, they’re all slap happy. So, intense bursts of laughter can be heard in the early mornings all stemming from the members of the choir.

“I just love being able to sing more acapella songs and vibe off of each other,” Anna said. “I really look forward to waking up at five in the morning so I can get to go. I’m excited, and I have a really good time in that class, so it pushes me.”

Even though Anna has a jam-packed schedule that includes her participation in the fall play and the Central Singers, she consistently finds time for one thing that is truly important to her: volunteering. Anna attempts to volunteer whenever she is available, and she finds complete joy in giving back to others.

One of Anna’s favorite volunteering opportunities is through the Governor’s Honor Guard. She aids tourists on Mackinac Island over the summer and really enjoys the memories she gains each year.

“You get to stay up on the island for a week,” Anna said. “You get discounts and stuff, and it’s really fun. I get to do that, and I’m in a leadership position in that organization, so I get to teach other girls that get to do it.”

Anna is also a member of NHS, so she partakes in the volunteering opportunities that it requires. Additionally, she participates in any volunteering that is available in the community such as in soup kitchens and in the nursery at her church. Anna specifically finds passion in volunteering when it involves children. She desires to pursue teaching as a career and enjoys working and interacting with kids whenever she discovers the chance.

“I really like seeing the joy on peoples’ faces if I get to interact with certain people that I’m helping,” Anna said. “I like the idea of knowing that I’m helping around the community, and I’m doing something to make it better. Any time I get the opportunity, I try to take it.”