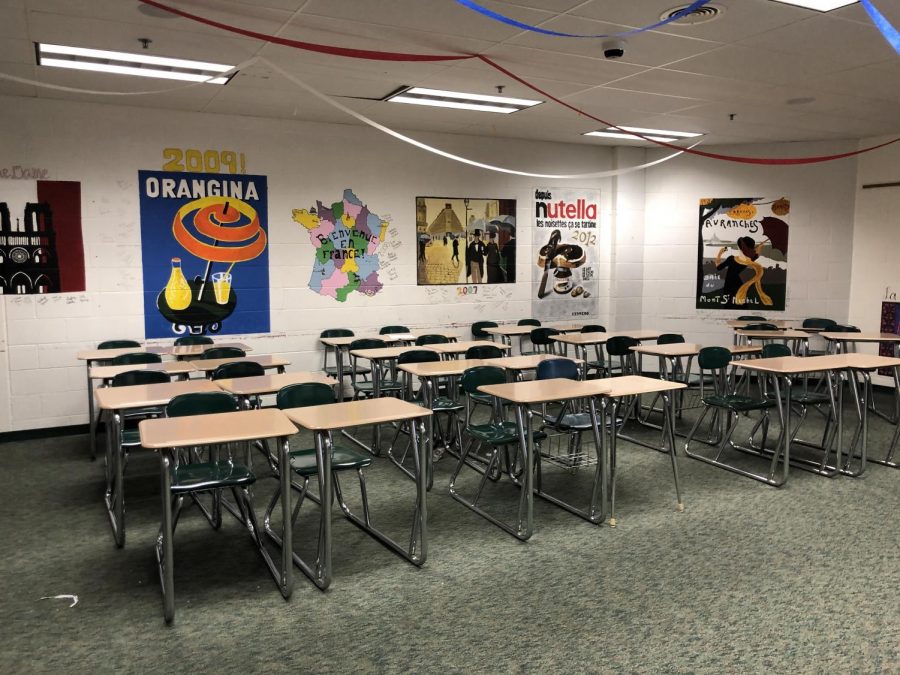 This mixture is due to classes at FHC requiring 20 students to run. If a class has less than that, it’s at risk of not being run or being cut from the school, and for the language department teachers, they found themselves in the middle of this dilemma.

“Because we now only have a six-hour day,” Van Houten said, mentioning the elimination of most zero hours, “there are fewer kids that can take an upper-level language than there used to be, so the numbers have dwindled a little bit. The only way that we can continue it, or [that] we’re allowed to continue it, is to combine [language] classes.”

This decision to combine language classes not only saves the programs themselves but also money. For public schools, all funding comes from the state, so only classes with enough students can afford to be run during the school year.

Currently, at FHC, all the language classes available have mixed high-level hours. AP Spanish and Spanish 4 are mixed in two different hours, and this same model of mixture applies to American Sign Language (ASL) 3 and 4, AP French and French 4, and Chinese 1, 2, 3, and 4 with each language mix running in the same classroom, with the same teacher, and during the same hour.

Working around this hurdle, the language teachers have developed strategies to teach two classes at once the best they can.

“It’s a matter of planning and trying to do the planning so that when it’s time for this group to present something,” Van Houten said, “that group is researching. Sometimes that works; sometimes it doesn’t work… there are times when it’s like, ‘Sorry, guys, you can practice with conjugations or do something while I work with the other class.’ It’s certainly not optimal. I don’t know of any who would tell you, ‘Oh, this is great. This is what’s best for students.’”

While it may not be the most favorable way to learn a language, Van Houten shares that “many, many, many language teachers in the country” have similar programs of mixed levels. And for junior Faith Nhkum in Chinese 2, she has learned to love the mixture.

“I enjoy having all the different levels in one class,” Faith said. “The teacher gives more time to Chinese 1, but that [is] because [the students] are new. She posts up all the lesson plans on the wall for us so that we are always working on something when [she] is not working with us.”

Whereas most language classes mix just two levels, only one hour is offered for Chinese, so there are multiple classes in the room. Yet, as this is the only way it is offered, Faith has adapted.

Learning to love this learning style and environment of mixed classes has helped Faith and other students taking Chinese classes. As Van Houten mentioned, planning ahead to cater to each level in the combined hour, and Faith understands the mixing of levels while always looking toward the positives.

“She gives more time to Chinese 1,” Faith said, “because they are learning something totally unfamiliar to them. For Chinese 2, 3, and 4, we understand what to do already, so she doesn’t necessarily have to ‘teach’ us. What’s nice is that when you do finish your work, you can work on homework or study for other classes; plus, it is always [during] first hour.”

These moments of learning for yourself—self-directing yourself—are an important part of having a mixed class. When the teacher needs to work with the other level in that hour, the group he or she isn’t working with has to focus on a more liberated learning style.

This teaches independence, and in a sense, senior Katie Woods, a student in ASL 3, is grateful for that.

This togetherness has brought the students closer together, and if any issues arise or there are questions, Katie says that with ASL teacher Kimberly Anderson, students “can always come in after school” or send emails if class time doesn’t allow for it.

Yet it’s this lack of class time that worries the language teachers who have taught singular classes and now teach combined classes. As languages thrive off immersion and daily practice, Van Houten reminisces about the long, continuous conversations in the target language.

“You would have so much more time for discussion [in normal, one-level classes],” Van Houten said. “Really, discussion is what I think about [in teaching] because if I’m discussing with one group, what’s the other group doing? So it’s like, ‘Okay, I’ve got ten minutes,’ and then I’ve got to move here even though we maybe could have had a really wonderful 30-minute conversation [with one class].”

With time running tighter and split between levels in one hour, language teachers work in “overtime,” as Van Houten said, and plan ahead to ensure that the mixed classes run smoothly.

As previously mentioned, planning and developing strategies have been crucial for the teachers, and all the time and dedication have paid off. Students are adapting to this mixture, and for Katie who notes that it’s “definitely different,” she hasn’t felt her learning be impacted on account of hard work from the teachers.

“Anderson usually does a really good job splitting it up between ASL 4 and ASL 3,” Katie said. “Sometimes she’ll have the [other students] doing something online, and then she’ll work with us [in ASL 3], or she’ll have us doing something online and have the [ASL 4] kids working with her. It seems to really balance out, which I think is a good thing.”

Students like Katie and Faith have learned in tandem with teachers on how to work with this new style of learning; each year a new tip or trick is learned. However, for teachers, this is never the ideal in order to fully educate their students, but it is what is working to keep language classes running.

“I’m really grateful in general that they’ve kept French up and running,” Van Houten said, commenting on the issues of class size. “My frustration is that there’s not enough money to do things the way they should be done. In a perfect world, it would be completely different.”