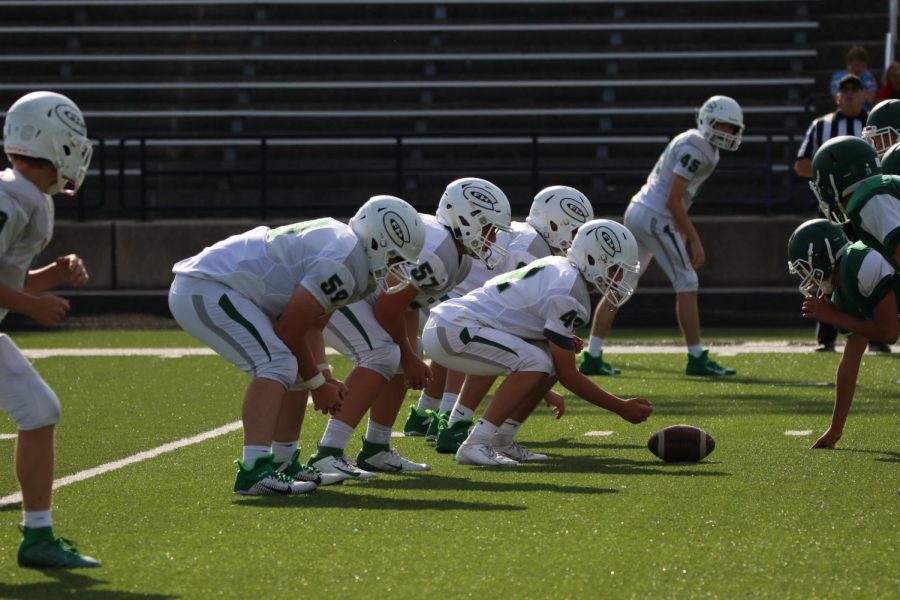 The Rangers had no trouble defeating the Greenville Yellow Jackets on Thursday, leaving them scoreless the entire game. This game was the final game for the freshman football team, leaving the team with a stellar final record of 7-0-2.

The Rangers kicked off the game, and Greenville was immediately met with impenetrable defense and was quickly forced to punt away. Picking up the ball, the Rangers quickly got to work, driving down and scoring with a 50-yard run by Jack Elliot. The kick by Owen Meyer was the cherry on top and made the score 7-0.

Greenville took the ball and began a long drive that would take them through the rest of the quarter until they turned it over on downs at the beginning of the second quarter. In the second quarter, the game began to move at breakneck speed, with 27 points scored by the Rangers and none by the Yellow Jackets.

After taking the ball, the Rangers proceeded to execute several large gains before breaking out with a 40-yard run after the catch by Chase Robinson, who broke numerous tackles before the Yellowjackets wrestled him to the ground on the 1-yard line. Carter Lyons finished off the drive, scoring the second touchdown of the game to make the score 13-0. Two penalties on the 2-point conversion attempts caused the Rangers to not convert the extra point.

An error by the Yellow Jackets caused them to stare at the ball on the ground while the Rangers jumped on it and recovered it, giving them yet another opportunity to add to the increasing score gap. Given perfect field position, Jack Elliot had a 20-yard run to the 5-yard line, where he then punched it in to make the score 20-0. The 2-point conversion was good on a pass to Michael Campbell.

The Yellow Jackets this time received the kickoff but were then intercepted shortly into their drive by Sam Sneider, who ran the ball back for a pick-6. The kick by Owen Meyer was good, making the score an even more dominant 28-0. Greenville once again fumbled the ball on the kickoff, giving the Rangers once again, perfect scoring position.

The Rangers once again drove down quickly to the 15-yard line where a pass to Jackson Waclawski scored the Rangers their fourth touchdown, making the score 34-0. The Yellow Jackets took the kickoff and drove down a bit until they threw an interception to Magnus Salmon. The Rangers ran several plays until they ran out the clock. The score at halftime was 34-0, leaving the Rangers in a favorable position, to say the least.

The second half was much less explosive than the first, although the domination by the Rangers continued. The Rangers took the ball off the kickoff and began to drive, taking their time down the field before a breakout run by Jack Elliot went for 20 yards for the first score of the half. The kick was no good and the score was left at 40-0, where it would remain for the rest of the game. Greenville took the ball and turned it over on downs, taking up the remainder of the quarter with the drive.

The Rangers took the ball on the 50 as the fourth quarter came to a close. They drove for a time before they were forced to punt away. Greenville took the ball and met similar success against the stellar Ranger defense. They punted away after several plays and the Rangers took the ball. The Rangers were once again stopped and forced to punt. By this time, the game clock had almost run out and the Yellow Jackets attempted to put a score on the board until the clock sealed their scoreless fate. The game ended with the score 40-0 and the Rangers’ record 7-0-2, a very satisfying conclusion to a stellar season.