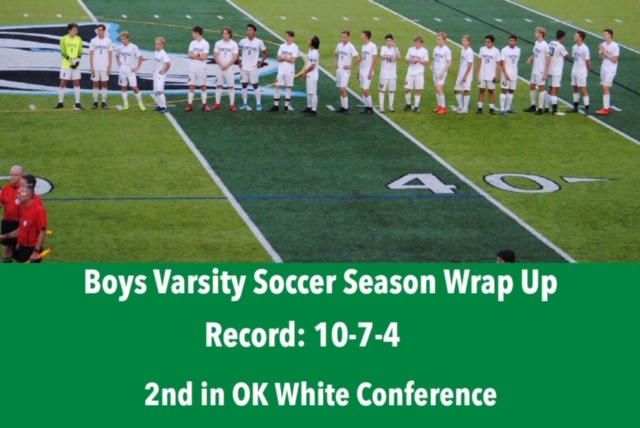 A major theme of boys varsity soccer’s season was simply one word: adversity. Whether it be involving personnel on the team or injuries, the Rangers were frequently put in difficult positions to come from behind and have success. For example, the hiring of new head coach Paul Kramer presented a new challenge for the returning player in adjusting to a new style of play for the team, even with Kramer being the JV coach last year.

Many new faces on the team played a big factor in the opening games of the season. The team suffered two tough losses to a very good East Kentwood team and a talented Grand Haven squad. Defensive miscues really hurt the Rangers in these two games. With more communication on the defensive end, the outcomes could have been different in these games. FHC’s defense really saw this as a turning point in the season for the team.

“At the beginning of the season, the struggle was just communication as a whole and knowing basic assignments that just come with the outside back position,“ junior Mason Corcoran said. “Knowing that, we would have been able to get more time to try and click the offense and defense together, so we didn’t have gaps in the midfield or anything. “

The boys continued the non-conference gauntlet into a match with Grand Rapids Christian. Improved defense from last game helped FHC tie a very good Eagles team that was highly ranked towards the end of the season. As the Rangers began to figure things out defensively, offense became a major focal point with conference play was right around the corner.

This shift to improving the offense paid off, as the team scored a season-high 8 goals against the Greenville Yellow Jackets in a game of pure domination from the Rangers. Four goals from Sammy paved the way for FHC’s first conference win.

Despite the win, the Rangers suffered many injuries going into their next conference game against Cedar Springs. Early defensive miscues and lack of depth defensively hurt the team in this one, as the Rangers fell 6-1 to the Red Hawks. For Coach Kramer, injuries became a big factor in these early conference games.

“Injuries definitely played a factor this year,” Kramer said. “We lost one of our forwards for roughly 75% of our season to a severe ankle injury, which really hurt our offense. [We also] lost one of our midfielders to a slight leg fracture. Both hurt in terms of team depth and what we’re allowed to do. Little nagging injuries in soccer are always prevalent but players fight through it.“

FHC bounced back strongly in the next couple of games with a tie over a solid Northview squad and a 7-0 win over the Ottawa Hills Bengals. Senior Ethan Hale and junior Matthew Mahoney were big in these games on the defensive end, as both teams rarely saw the other side of the field thanks to the strong defensive play.

The momentum from these two well-played games resulted in one of the best games played from FHC all season. The Rangers tied the #10 ranked Caledonia Fighting Scots on the road. While the team still tied, this was a moral victory that would give them confidence down the road into big games as it showed the Rangers can hang with one of the most talented teams in the state.

Unfortunately, the Rangers couldn’t turn the momentum from the tie into two wins, as they fell to one of the top teams in the state in the Forest Hills Northern Huskies and then also the Lowell Red Arrows. These two losses sparked an idea that the team carried for the rest of the season: the revenge tour.

“The revenge tour was prompted by a terrible loss to Lowell,” senior midfielder Dani Ahmetovic said. “We definitely should’ve won the game, but we fell apart after leading 2-1. We decided that from that game on we were to change our formation and work ethic, and we ended the season 7-2-1 in the last 10 games compared to 2-5-3 in the previous 10 games.“

The momentum behind the revenge tour sparked 9 goals in 3 games and 3 consecutive wins against conference opponents such as Northview, Greenville, and Cedar Springs. Senior Sammy Postlewait scored over half of those goals, and the motivation behind it was just to try and leave a lasting legacy on the program.

“My main motivation was that I knew it was my last year, and I knew I had to make the best out of it every game,“ Sammy said. “I just wanted to have a great season, so I tried my hardest every game.“

FHC then shifted back to non-conference action where they would take on the Portage Northern Huskies and the rival East Grand Rapids Pioneers in a span of three days. The boys tied the Huskies, who clinched a District championship this year, on the road, thanks to a late goal from senior JT Guntern. They then defeated the Pioneers 2-0 behind a great offensive performance from Sammy. Sammy, who is a four-year varsity player, will be missed next year on the offensive end.

“Sammy will be a huge loss next year,“ Kramer said. “He has special skills that not every high school player has. It will definitely change the dynamic of the team, as goals will need to be manufactured by many different players, not just one.“

The Rangers finished off the season strong with two wins over the Ottawa Hills Bengals and a revenge win over Lowell on Senior Night. However, the team could not get the win over their arch-rival Forest Hills Northern, falling 4-1 to the Huskies. The boys ended the regular season with an overall record of 9-6-4.

The team then focused its attention on districts, where they would take on the Ottawa Hills Bengals for a third time this season. The boys soundly defeated the Bengals behind a dominant performance on both sides of the ball. Next, FHC took on the most challenging foe of the year, the Okemos Chiefs. The boys battled hard and kept the game close for a while, but the boys fell 3-1 against the top ranked team in the state, and their season ended at 10-7-4.

“The loss against Okemos signified the end of our season, so it really took a toll on the whole team.“ senior goalie Kyler Williams said. “Despite losing, I think it was one of [our] hardest fought games of the season. Everyone on the team gave it everything they had.“

“As a team, our first touch, speed of play, and overall team speed and physicality must improve.“ Kramer said. “I never questioned the effort the boys gave this season, but these things must improve if we’re looking to claim the OK White next year.”