Are the Lions back? 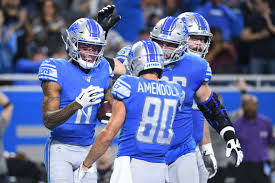 Tommy: It seems like every year, the Detroit Lions follow the same pattern. They start out hot and defeat some of the top teams in the league. It’s a pattern of inconsistency that I’ve noticed for countless years now. Let’s just look at last year. The Lions took the league by surprise when they defeated the Super Bowl champions that year in the New England Patriots, but proceeded to lose to the 5-8 Buffalo Bills. Even this year, the Lions defeated the NFC East favorite Philadelphia Eagles on the road, nearly defeated Patrick Mahomes and the Kansas City Chiefs, and should have beaten the Green Bay Packers a week ago. But Detroit has also found a way to tie the choke away a 17-0 lead to the 3-3-1 Arizona Cardinals with a rookie quarterback and first-year head coach. It’s hard to say that the Lions are back to being a contender when inconsistency seems to be a problem almost every year.

Eli: The Lions have recently rebranded themselves as a playoff contender in the NFL, despite their 2-3-1 record this year, which doesn’t tell the whole story of the season so far. As cliche as it sounds, the Lions have been hindered by poor officiating, not just this year, but many times in the past. One of my earliest memories of Detroit being screwed over by the referees dates back to the 2010 season, with the infamous Calvin Johnson no-catch. Under second-year coach Matt Patricia, the Lions have exposed the weaknesses of two of the NFL’s most highly-touted powerhouses: The LA Rams and the Kansas City Chiefs. Last year, the Rams were rolling through most every team, up until Week 12. They came to Ford Field and the Lions held their exceptional offense to 30 points, a poor performance for the Rams. This year, the Lions came within 4 points of a Chiefs team led by an offense consisting of gunslinging quarterback Patrick Mahomes and veteran tight end Travis Kelce. Lastly, the Lions have had more playoff appearances in the last 8 years (3) than in the 15 years prior to that (2). This Lions team is trending upwards, exposing the weaknesses of the top behemoths in the league, despite being inhibited by bad refereeing. This team is back.

Tommy: I do agree that this Lions team is better than last year, and have shown a lot of improvement. But I think in order to be back, you have to finish and beat some of those teams such as the Chiefs and Packers this year. You can’t say you are a playoff-contending team if you only win 1 of the 4 toughest games on your schedule, against a struggling Eagles squad without their two best receivers. By the way, the Lions compete in arguably the best division in football in the NFC North. Green Bay, Minnesota, and Chicago are all playoff-caliber teams, so it makes it hard to win a lot of games when you see those three teams twice a year. Detroit still has to go to Soldier Field to play the former division champs in the Bears and go to Minnesota to compete against a much improved Vikings team. So it’s hard to compete for a Super Bowl if you now stand last in your own division.

The Lions have had some unfavorable outcomes this year in early must-win games, but if they play competitively, I can see them vying for another playoff spot, most likely in the wild card. The division matches will admittedly be tough, but our games against the rest of the league should go well for us. The Broncos lost in a lackluster performance in Week 1 to the Raiders, who we also play, who also got smacked by a Packers team we hung close with. Two of the easiest games all year for us should be against the winless-so-far Washington Redskins, and at home against the 2-4 Tampa Bay Buccaneers. Our next game is against the New York Giants, who have struggled under the leadership of rookie quarterback Daniel Jones; a win seems likely. Hoping to scrap out the next game against the Vikings, possibly win both games against the Chicago Bears helpless offense, a playoff berth is definitely possible, possibly entering the postseason at 9-6-1 or 10-5-1.

Tommy: While the Lions do have some favorable matchups ahead, winning their division games with some tough road games ahead will certainly be a challenge. Chicago is no gimme win despite how horrendous that offense is, and Minnesota is a very tough team to play at home. By the way, Chicago defeated the Lions last year at Ford Field with their backup quarterback, so imagine what they could do with Mitchell Trubisky. Detroit also has a matchup against a very good Dallas Cowboys team, who could arguably be the most talented team in the league. Even if the Lions make the playoffs with the challenging games ahead, is there a real belief they can beat a team like the strong NFC contenders in New Orleans, Green Bay, and San Francisco? I believe would have to win a playoff game and/or beat one of those three teams to be labeled as “back”.

Eli: Chicago had played better with their backup, Chase Daniel, than they have during the horrendous start to the season by Mitch Trubisky. Also dropping their last game on a missed game-winning field goal by kicker Eddy Piñeiro, the Bears have dropped to 3-4, below the Lions, and lost their last three games. This downwards-trending Chicago team has proven how vulnerable they really; it’s not that improbable for the Lions to get the season sweep on the Bears this year. The Lions have yet another unpredictable team on their upcoming schedule: the Dallas Cowboys. The Cowboys have been impressive this year, touting a 4-3 record after tough losses against the best teams in the league, for example, a 34-24 defeat against Green Bay. But one of their losses exposes their weaknesses: a 24-22 loss against the 1-6 New York Jets. The Jets have pitted themselves in the cellar of the NFL this year after losing their first six games up to their match against the Cowboys. Unstable Bears and Cowboys teams can lead to 3 wins for Detroit, and the Lions have proven they can hang with the Packers. There is a decent probability that the Lions can storm into the playoffs, pick up a few wins, and prove that they really are back.