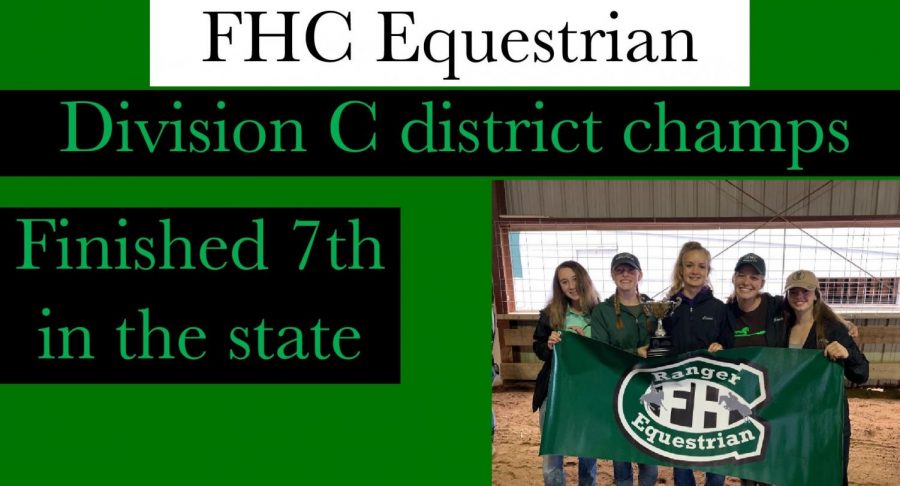 This past season, the FHC Equestrian team finished 7th in the state finals for Division C. Through much diversity and hardships the team showed they were very capable of getting through it and in the end finishing up a spectacular season.

“I’d say one challenge was horse injuries. One of our riders had 3 different horses she showed during the season due to injury.” Said Coach Berendsbode. “Another was having a young team. 2 of our riders were freshmen and in their first year of riding for the equestrian team (although experienced in riding).”

One very important thing is how the team can come together throughout the season, how they can adapt, and how they began to feel more comfortable together.

“I was very proud of Masyn and Abby for doing such a great job this year as it was their first season. I think we all did a great job in a more competitive division this year and we made it to state!” Junior Alaina Briggs said. “Also shoutout to Stacie Berends our amazing coach these past two years for always bringing the party to the meets, and Claire Richardson for being a consistently excellent rider.”

Junior Aaina Briggs has been a part of this team for a few years now as she takes on a huge leadership role. She acknowledged how much they really came together by the end of the year, and how there were no weak links within the team. “Equestrian team this year, last year, and in middle school is nothing like what I thought it would be. I absolutely adore the team spirit we have and I love showing amongst friends,” she said. “One of my simultaneously best and worst memories from this season was how much it rained at regionals and still being able to qualify in downpour. It was kind of awful but I’m definitely going to remember showing with my friends in the rain for the rest of my life. “

The team started off very strong with two straight first-place finishes, both in district meets ending with 281 points that pushed them along to regionals where they put up another very good performance taking second place, in very bad weather, to a very good Vicksburg team. They then made their way along to the state finals to compete against some of the best and most organized teams in the state. The took 7th place to cap off a spectacular season. As they head into the offseason, they will work very hard on conditioning to make sure they come back even stronger next year.

“I know all the riders will be working on patterns throughout the offseason, and we will be re-evaluating what classes each rider should be participating in as well. I know offseason always means lots of conditioning for the riders at my barn. Some of these decisions will be made once we know who will be on the team next year as well.” Coach Berendsbode said. She is very sure about what changes need to be made to be even more successful next year.

As this next season rolls around, the equestrian team will be looking to take what they did this year, and build on that going into next year.