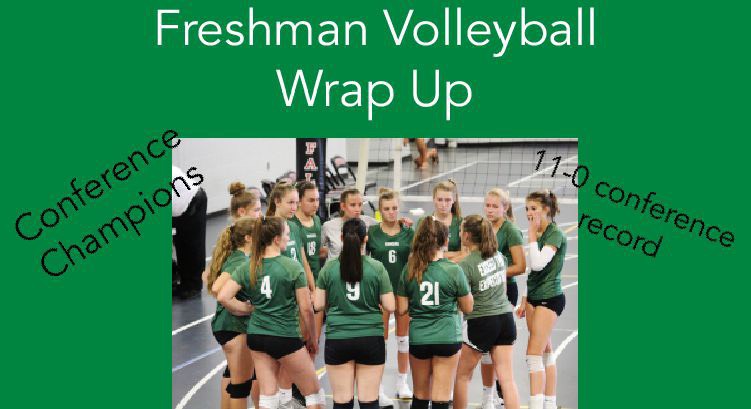 The Freshman volleyball team had yet another dominant season under head coach Bri Tilton.  For the second consecutive year, Tilton led her team to be undefeated in conference play. This year, the Rangers went 11-0, securing themselves the conference championship title.

“It felt incredible to end our season undefeated in conference play,” captain Addy Scholtens said. “Coach Bri has helped us to grow individually and as a team throughout every single practice.”

Sportsmanship played a vital role throughout the season; executing as the ongoing compelling spark which led FHC to a successful season.

“Everyone played their role on the team without complaints and everyone did a fabulous job. It took little pieces to be put together to have the whole machine of our teamwork flawless, and I can not thank the girls enough,” said coach Tilton.

Captains Addy Scholtens, Emma Costello, and Ally Werkema served as a large part of the team’s success throughout the season. They left a major impact on the court but also off the court as well.

“I think the captains led the closeness and were positive role models and leaders for the rest of the team. They were very protective and held their team accountably,” said Coach Tilton.

“I impacted my team by being a solid player on the court and cheering on my team. I try to keep everyone involved off the court with encouraging texts and slapping five in the hallway,” said captain Emma Costello.

Getting ready for conference play, the beginning of the season consisted of many invites for the Rangers. These matches were crucial due to the fact that the team gained experience with playing with one another early in the season. They participated in the East Kentwood Falcon Fest Invite, Grand Rapids Christain Quad, East Kentwood Invite, and Battle of the Hills.

The match against northern at the Battle of the Hills showed that the Rangers played with resilience. They started off the first set down by a large deficit. However, defensively Emma helped to spark the fire for her team putting the Rangers back into the game.  Ally dominated the Ranger’s offensive game with several kills putting the rangers back on the board. FHC ended up winning this match within just two sets, despite their sluggish start. Coming off the Northern match, Cedar Springs was the first conference matchup for FHC. The Lady Rangers won the match within just two sets. Ally Werkema ran the offense and efficiently switched the flow of the game. Overall, the passing was very efficient which helped make it a great game all around.

Northern was the next conference match followed by Ottawa Hills, which they also won in just two sets. Back on the road, the Rangers played Northview in a fiercely fought back and forth battle. They won this match 2-1 winning the first and third sets. At the beginning of the season, unforced errors crept up on the Rangers. The Northview match was the beginning of the turn around for limited errors. The MVA tournament was a numerous amount of player’s favorite memory of the season. The Rangers took home first placed and dominated throughout the tournament, not losing a match. The Rangers competed in the Grand Haven Lake Shore Classic where they went 3-2, placing second overall.  After this tournament, FHC finished the remaining games of their conference play.

“It was an amazing feeling to finish the season without losing a match. There were a couple of close games, but we pulled together and won,” said Emma.

“If I could send one quick message to the girls, I wanted to tell them how appreciative I am for all their hard work and hours put into this super successful season I love them all and can not wait to see their next steps,” said Head coach Bri Tilton.