The effect of puzzle pieces 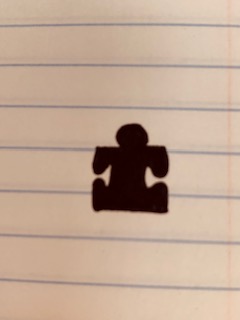 We have all been around them.

It could have been when you were two trying to construct a dog out of four blocky pieces of wood or you could have been attempting to assemble an image of a vast forest in the middle of nowhere with trees spilling fire and sunshine off of their leaves. No matter the circumstance, we have all been in the near vicinity of a puzzle.

Yet, other than being a pleasurable recreational activity, puzzles have a meaning that is hidden behind the loud, swirling fragments of material. The most well-known intent of the physical puzzle pieces is to spread autism awareness.

To most, the symbol of a puzzle piece may not be impactful; however, to me, as well as my family, it means so much more than anyone will ever know.

It is because my brother has autism.

When he was only a toddler, my mother could tell that he was autistic. Call it mother’s instinct—or something of that nature—but based on the way he acted both at home and school, as well as how he reacted to specific situations, it was quite evident that he was showing the signs.

For years, my parents fought with ignorant doctors who refused to diagnose him with autism. Meanwhile, as doctors said he didn’t have it, my brother continued to get worse and worse due to a lack of resources to help him through his struggles.

It wasn’t until he was nine years old that he was finally diagnosed.

For seven years of his life, he was continually perplexed as to why he would get in trouble for things when in reality, he didn’t understand why they were wrong. Ever since then, my family has acted as a constant stream of support in trying to help him through the different aspects of his life that he finds complicated.

He went to specialized therapists, and my family participated in autism awareness 5K’s. He is given a chunk of time out of his day at his school to work with a personal tutor whose job is to make sure he understands what is going on in school. My father even got a massive tattoo of a large circle oozing with colorful puzzle pieces and with navy lightning bolts circulating down his arm.

I even decided that when I turn eighteen, I am going to get a tattoo of a puzzle piece as a way to show how it impacts my family.

Puzzle pieces do not just have to be a symbol of autism awareness either. That is what makes them so unique; they can have an abundance of meaning. There are no rules tied to them. The meaning behind them is different for everyone.

That is what makes them so beautiful.