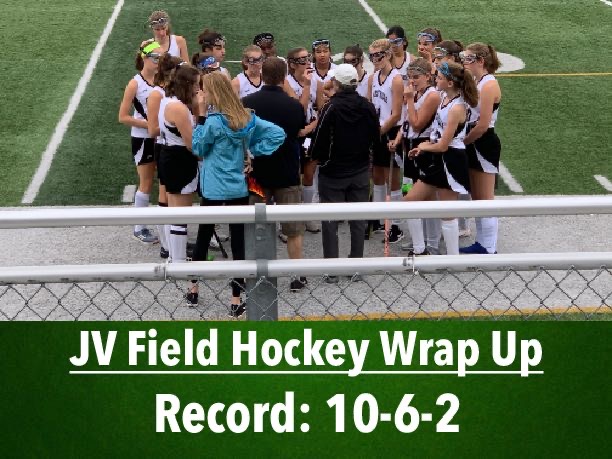 It was a successful season for the JV girls field hockey teams. At the beginning of the year, the JV field hockey program consisted of two separate teams: the JV White squad and the JV Purple squad. The two squads combined together to form one JV field hockey team near halfway into the season, and the girls only dropped two games, against two of the best teams in the state at their annual end of the year tournament.

“We were most proud of our team unity, hard work and how much fun they had and shared with us throughout the season,” said head coach Brian Bruno. Sophomore Remmie Gavle said, “I am most proud of how much our team improved with mechanics and skills”.

The team started off a bit slowly as they dropped their first match of the year against Dexter. The girls would only improve from this point on as they developed both their offensive and defensive aspects of the game over the season. The offense developed as the girls won their following match 4-0 against Novi. Freshman Katy Stevenson scored two goals while fellow freshman Mackenzie Wintrich scored a goal and so did Rockford freshman Alexis Neuman.

The girls won their next two matches against Saline and East Grand Rapids. The match against Saline resulted in a 2-0 victory behind goals from Rockford freshman Isabelle Osborn and FHE sophomore Eileen Grunwald. FHN freshman Raven Kincaid scored the lone goal that lifted them over East Grand Rapids. They continued their midseason undefeated streak with a 2-2 draw against Ann Arbor Pioneer. In that game, Eileen and senior Kirsten Szost from Jenison scored the two goals that evened the game with little time remaining.

The team monumentally improved during the season, to which Bruno said, “We most improved our field awareness and positioning throughout the season”.

They proved this improvement in a 5-0 dominating victory against Detroit Country Day in which Kirsten, Eileen, and Raven accounted for the five goals. Raven scored another goal in the team’s 1-0 triumph in its match against Mercy. The team won its last regular-season game 2-0 against Hartland; Katy and FHN freshman Abigail Almassian FHN scored the pair of goals. Junior goalie Eliana McGlinchey had stellar performances in these games, allowing zero goals over the course of the three matches.

With the regular season over, the girls advanced to the postseason. The postseason consisted of the JV tournament at Dexter. In the tournament, the girls finished with a 1-1-2 record. The tournament started in a round-robin style where they played their first game against Saline and unfortunately lost. They created many chances but were never able to score. Their next game ended as a scoreless draw against Ann Arbor Pioneer, but to determine who would get the higher seed, it went into a shootout. Eliana blocked away all of the shots and Eileen and junior Joanna Scorziello from FHN scored to earn the team the higher seed. The girls won 2-0 against Novi after Joanna scored again and so did Caledonia sophomore, Amelia Ziesmer. They lost their final game against Dexter 0-1.

Remmie also said, “I’m expecting next year’s team to be super tough and skilled. We have a lot of underclassmen that will be really strong players in the coming years”. The team finished with an impressive 10-6-2 record. “The best way for our team to improve for next season, is to take advantage of any winter sessions, Futures training and if they practice on their own during the offseason we will come into next season an even stronger team,” Bruno said. It will be an exciting season next year and the girls look to get even better after a successful season this year.