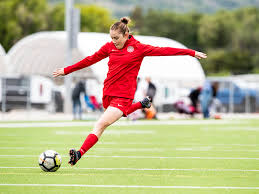 A year ago, Olivia traveled overseas to practice with numerous clubs such as Paris St. Germain and Olympique Lyon in France and Bayern Munich in Germany, who she plays for currently.

Just two years ago at the age of 11, she verbally committed to a full-ride scholarship to play soccer at the University of North Carolina-Chapel Hill. UNC has one of the most prestigious women’s soccer programs in women’s college soccer history.

Reactions were a mix of emotions from her peretherall of followers on Instagram. She and her dad, who assists her,  are very active on her account. On the daily, she posts about her day to day crazy soccer life. Since she has created her own media base, there were many reactions to her decision to go professional. Some were shocked because she is so young. On the other side of things, some were excited because they believe this can be a turning point for female athletes. However, FIFA rules were brought up in the conversation as well.  FIFA’s rules try to prohibit players from playing in their league when under 18, barring a few exceptions. Similarly, you must be 18 to play in the N.W.S.L. Olivia was an exception to this.

Two women on the women’s national team, forgoed playing in college and started their professional career earlier instead.  One was Mallory Pugh in 2012; she left her opportunity to play for UCLA and joined the Washington Spirit team instead. The other player was Lindsey Horan. She decided to play for P.S.G at the age of 18 and did not follow through with her scholarship to UNC.

Since she signed to play professionally, she also signed a multiyear endorsement deal with Nike, a sports agency, and a representation deal with Wasserman Media Group.

Her lifestyle, with soccer upon a pedestal, has morphed to be something very different compared to any other student athlete at her age. Olivia started homeschooling at the age of 5. At the age of 7, she started participating in specific training. This training helped develop her skills on the ball, which has led her to be one of the best nationally at her age. Ever since she was a little girl, she stood out with her play. She was the very first girl to play with boys in the developmental academy which is the highest level of boy’s youth soccer. She also played with older age groups on the youth national teams.

Many critics wonder what she will be able to do at the professional level and how long it will take her to excel. Her skills are what elevated her to such a high level. However, due to the fact that her body has not yet reached maturity, she may be at a disadvantage physically. Time will tell if her skills will be enough to persevere and compete with the best female soccer players in the world.