How LSU vs. Alabama can change the College Football Playoff 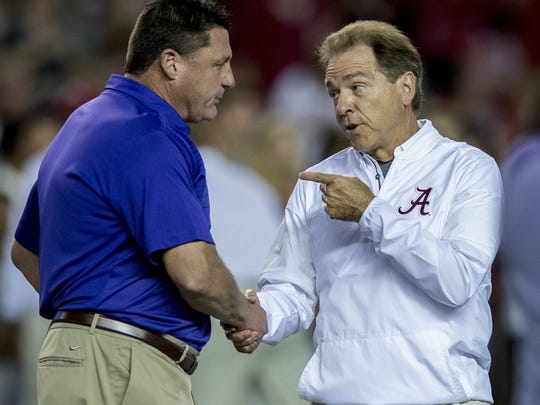 This coming Saturday in Tuscaloosa could be the most pivotal college football game of the year, and it could drastically change the seeding of the college football playoff. The number two ranked LSU Tigers travel to take on the number three ranked Alabama Crimson Tide. The Tide have won the last 8 meetings, but this game could put Nick Saban’s team in jeopardy of losing the winning streak and possibly an opportunity of getting into the College Football Playoff.

An injury to Alabama’s star quarterback Tua Tagovailoa two weeks ago against Tennessee was not a good sign for Saturday’s showdown. Tua has not performed at a high level when injured, and we saw that on full display last year in the SEC championship game against Georgia as well in the blowout loss in the National Championship against Clemson. So it will be interesting to see Tagovailoa in the Tide’s biggest game of the year, as Saban told the media his star quarterback would be this week’s starter.

This will also be a big test for Alabama’s defense, as this is the most talented offense they have faced this year. LSU’s offense is lethal, containing consensus Heisman trophy leader Joe Burrow at quarterback and weapons such as Justin Jefferson at receiver and a solid running back in Clyde Edwards-Helaire.

With the game’s intriguing implications, there are some interesting scenarios we could see play out depending on whichever team wins in Tuscaloosa.

In my mind, LSU is in a very good position leading up to this game. If they win, I think they will hold their #2 ranking, since the way Ohio State is playing right now and the games the Buckeyes have played and won. It will also most likely knock Alabama out of playoff contention, as the Tide’s strength of schedule is ranked 127th in the nation, while the teams that would be ahead of Alabama having much stronger resumes. The Ohio State vs. Penn State game will also have big implications on the playoff, so the winner of that would secure a playoff berth  Clemson would most likely be at 3 if LSU wins, and a Pac 12 team could round out the top 4 if LSU beats Georgia in the SEC championship.

The Tide winning this matchup would pose a very interesting situation for the College Football Playoff. The Tide would probably be ranked #1 in the country by the committee, but LSU could still get into the playoff with one loss. There would be a debate to get in for the 4 seed between one-loss LSU, one-loss Ohio State/Penn State, a one-loss Pac-12 team, and possibly a one-loss Georgia team. I think Ohio State/Penn State and LSU if they were to lose would be the two leading candidates to get in at the final seed. Again, Clemson would be pushed up to three after Bama/LSU and Ohio State/Penn State would lose, and the one loss debate would decide who would get the 4th spot in the playoff.

This game will be a lot different than last year’s disappointment. The spread offense for LSU has really transformed Joe Burrow as one of the best quarterbacks in college football. If Tua is back for Alabama, it will be very big, as he is very good at getting the ball to star receivers Jerry Jeudy, Devontae Smith, Henry Ruggs, and Jaylen Waddle. LSU may have found its offense to challenge Bama and take the next step to compete for championships, but the Tide have won this game 8 straight times, and it’ll be nine after this game is finished.