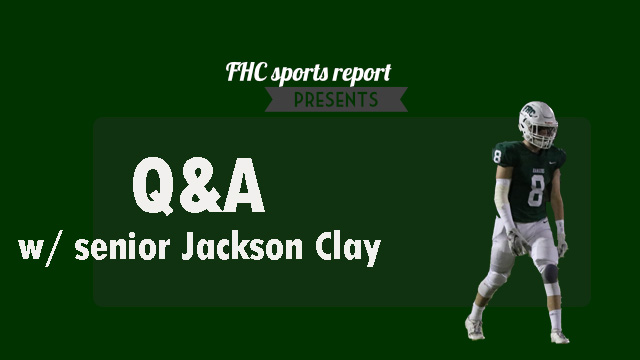 In Friday’s pre-district playoff game against Mattawan, star senior Jackson Clay went down with an injury in the game. The news was a major blow to the team, but especially Jackson, who is playing in his last season of varsity football of his career. We took to interview Jackson in order to find out how things are going since Friday.

How did your injury happen?

“I was chasing down a Mattawan player [on Friday], and I dove, and his heel came up and nailed my collar bone as I dove. After that, I landed on the right side of my collar bone, and that is when it broke.”

What were your immediate thoughts when you went down?

“I just wanted to get right back up, but I was in so much pain, so I really didn’t know what to think.”

After you knew you were done for the night, how did your role change?

“My role was still the same; I needed to lead my team to a victory and stay positive no matter what.”

What was the diagnosis, and how did you feel when you found out?

“When I went to the doctors to get x-rays, I had a feeling that something was wrong. When the doctor told me that it was a broken collar bone, I finally realized that I had already played my last game of the year.”

How have you dealt with the realization since?

“I have been trying to stay as positive as I can, even though it is very difficult to deal with. I still will always be here for my team, no matter what.”

What is your goal for Friday and how are you going to continue to help the team?

“The goal for Friday is to get the win, I will do whatever it takes for my team to play the best game possible. Even though I won’t be on the field, I will be still the same leader on the sidelines.”