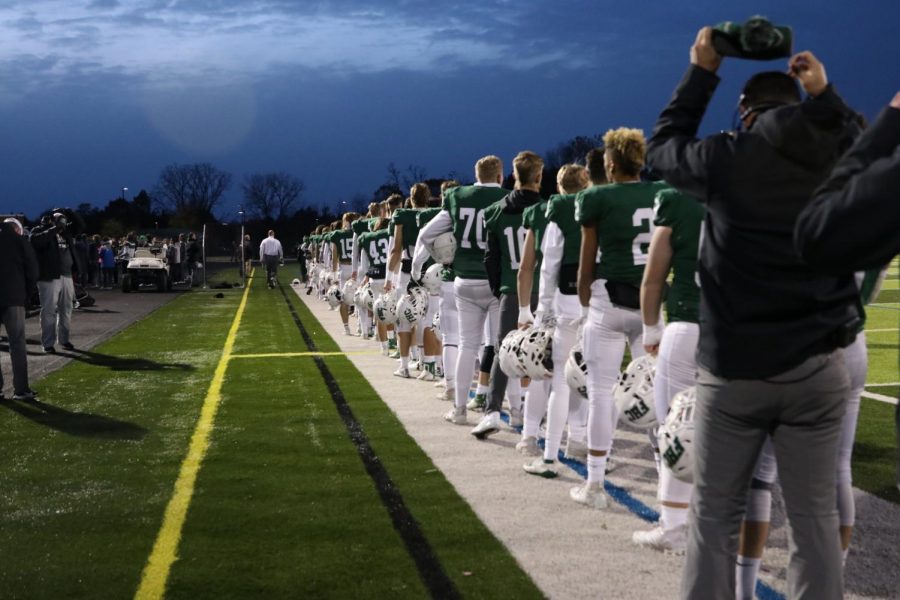 The varsity football team is on a roll; after losing a heartbreaker in Week 2 to Grandville, the Rangers have gone 6-1, with the sole loss coming at the hands of the OK White conference champion Cedar Springs Red Hawks. After the Cedar Springs loss, the Rangers have played their best football yet, with impressive wins over Lowell and then Mattawan in the pre-district round. Now sitting at 8-2, FHC will travel south to partake in the District final on Friday night against (and at) the 9-1 Portage Northern Huskies.

Portage Northern comes into this contest with four of its nine wins coming against fellow playoff teams. Two of these wins were against Portage Central, whom the Huskies defeated 56-26 in Week 3 and then 28-16 in the first round of Districts last Friday. Similarly to the Rangers, the Huskies defeated Mattawan handily, winning 48-21. The week before, however, came Northern’s only loss of the season so far, falling to a loaded East Lansing Trojans team.

To end the regular season, the Huskies took care of business against St. Joseph to secure the SMAC West title, defeating the Bears 27-20.

The Husky offense presents two deadly threats at the running back position: senior Tyler Amos and junior Anthony Tyus III. The two of them give Portage Northern two very different options, with Tyler standing at 5’9 and 185 lbs, and Anthony weighing in at 207 lbs and 6’1. Tyler is a finalist this year for Michigan’s Mr. Football—awarded to the best high school football player in Michigan—and holds offers from Butler and Saginaw Valley State. In 2018, Tyler earned All-State honors as a junior, and he has followed up that performance with over 1,400 yards and 23 touchdowns, all while averaging 8.2 yards per carry. Although, Amos did fumble the ball twice in last week’s game, but he handled the majority of carries as teammate Anthony Tyus III only played defense in the first half and saw very limited action in the second half.

Not only does Tyler contribute quite a bit offensively, but he also makes plays at defensive back. In the regular-season finale against St. Joseph, Tyler forced two turnovers, including the game-sealing interception in the final seconds.

Anthony is the more herald recruit so far, turning heads in camps and throughout this season thanks to his 1,500 yard+ performance this fall, scoring 16 touchdowns during the regular season. He holds offers from multiple Division 1 schools, including the likes of Western Michigan, Eastern Michigan, and Akron, with many more likely to come. Anthony has an almost unheard of combination of size and speed, while Tyler is very physical and is one of the fastest players in the Kalamazoo area.

In Friday’s matchup with Portage Central, Tyler cranked out a 94-yard touchdown run at the beginning of the first quarter. In the regular-season matchup with Portage Central, Amos carried 22 times for 190 yards and 3 touchdowns. This dynamic duo presents a deadly threat on the ground, and the FHC defensive line will have to play its best when it truly matters in order to stop them.

Not only do the Huskies have dangerous threats on the ground, but they also have a talented player at wide receiver and free safety. Cory Cunningham holds four Division 2 offers from local schools such as Saginaw Valley State, Northwood, Grand Valley State, and Davenport. Cunningham has a tendency to make big plays using his athletic ability and his 6-foot-3 frame. Against St. Joseph, Cunningham came up big multiple times, bailing out his team on third-and-longs. With senior Jackson Clay out due to a broken collar bone, sophomore Jacob Bonnett has to fill in and display an impressive performance—although, the sophomore has looked very good as of late and is impressing many.

Senior Jimmy Scholler will once again be required to produce on the ground with the loss of Jackson on screen plays, but Jacob will also fill in at wide receiver as well, just like he has been all season. Junior Jonah Spates will once again be the preferred target at wide receiver, and he will need to continue his success in critical times if the Rangers are to pull off the win.