The Ranger Cross Country teams had a great 2019 season 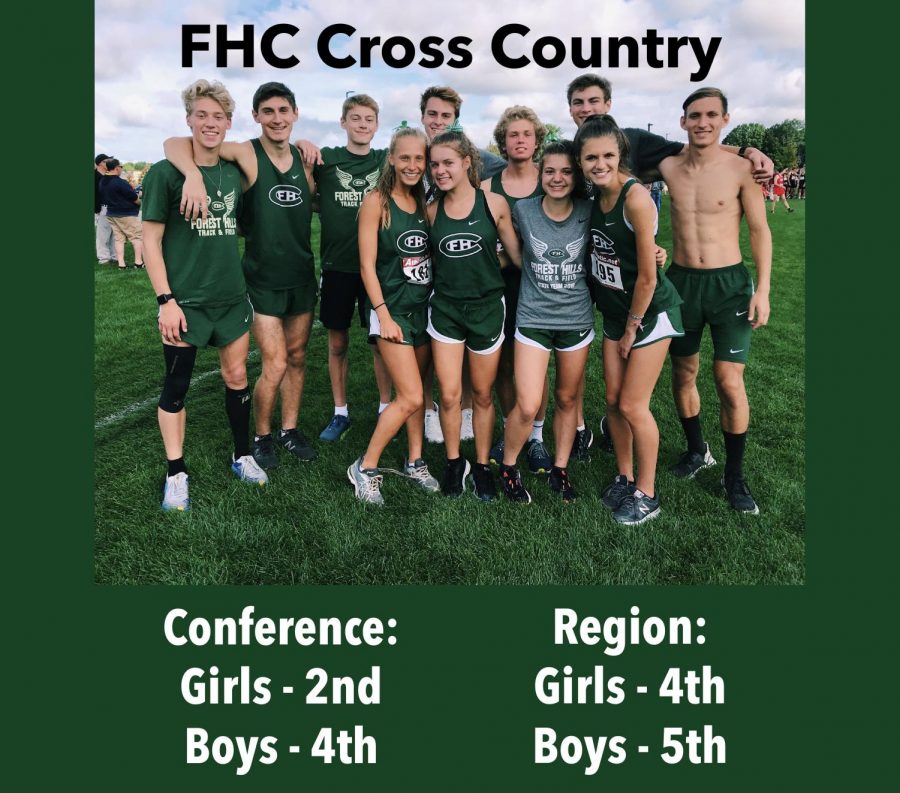 “The season went great,” Schipper said. “The team steadily improved throughout the season. We were hit early with some illness and nagging injuries, but once we got healthy, things got a lot better for us.”

“In the beginning of the season we started a little slow, but throughout the rest of the season we built up each meet, started to put things together, and become the team we knew we could be,” said sophomore Sam Yeager.

The next races for the Rangers were the Bredeweg Invite and the MSU Spartan Invitational. At the Bredeweg Invite, the girls team took fourth out of 18 teams, and the boys took seventh out of 18 teams. This race led up to the MSU Spartan Invitational, preparing the teams for this difficult event. This race is one of the larger events, with the boys having 33 schools entered and the girls having 37. Both of the teams took tenth place, showing very well overall.

“The girls second conference race was great since we both placed first and beat FHN,” said senior Ally Francisco.

“The season went really well, and it was really fun,” junior Whitney Currie said. “The atmosphere stayed positive throughout the whole season, and the teams were always really supportive of one another.

Next up was another two invites, the Portage invite and the Kent-Ottawa County meet. The Portage invite is another race that has many teams competing. The girls took 29th out of 37 schools, and the boys team took 22nd out of 40 schools. Then, in the Kent Ottawa County meet, the girls team took third out of 14 teams, and the boys took third out of 15 teams. Both teams were running consistently at this point in the season, with everyone pushing one another to do their best.

“The team is like a family. If someone didn’t have the best race, then we would tell them to keep their head up and move on to the next race,” said Sam.

The next race was the third and final conference race of the season. In this race, both teams did exceptionally well, with the girls team placing second out of six teams and the boys placing third out of six teams.

After that, the teams were off to regionals. This race is always very nerve-racking and exciting to run in with it being the final race before the State finals. Both teams had to run their hardest and give their best effort for this final race. Again, both teams did very well, showing how hard they have worked all season. The girls team took fourth place, and the boys team took fifth place out of 13 teams. Many runners agreed that this was one of the best meets of the season.

“Our best meet of the season was one-hundred percent the Regional [meet],” junior Kyle James-Heer said. “We had our top five guys run personal bests, and we were all under 17 minutes.”

“In my opinion, the best meet for the team this year was our Regional meet. Six out of the seven varsity girls had PR’s or SR’s and two girls qualified for states. It was cool to see all of the years’ hard work come together and for everyone to race well. It was a positive ending to the season,” senior Nicole Marco said.

Three runners from FHC then qualified for states: junior Whitney Currie, senior Nicole Marco, and senior Gabe Carlson. Unfortunately, Gabe got sick, so he was not able to race that day, leaving Whitney and Nicole as the only two representatives for FHC. Whitney did very well, placing 23rd out of 257 runners, and Nicole placed 104th.

“I would say Whitney had a phenomenal year; she broke the school record at regionals and placed in states. She worked so hard throughout the season, and it was cool to see it all pay off at the end,” Ally said.

Overall, the FHC XC teams had a phenomenal year, building off of one another to achieve the best results that they could. This year was a great year to build off of to do even better next season.

“We fell short on qualifying a team for the State Finals meet this year, so that is going to be a huge motivator for next season,” Schipper said.