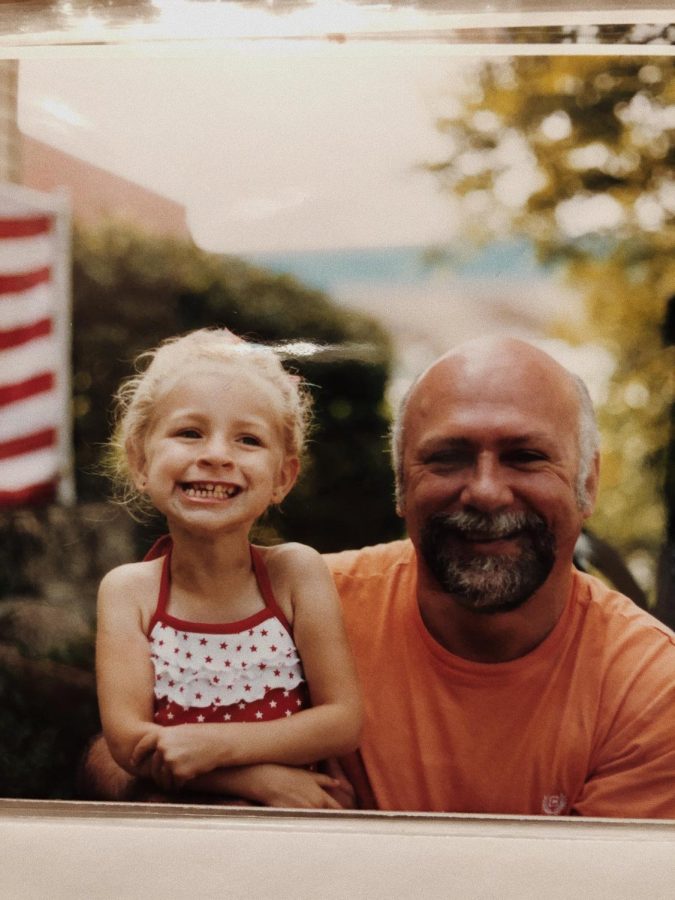 My papa and I

My childhood is a blur, a murky mosaic of green and yellow.

Mere brushstrokes of the full picture are all I remember: stacks of cash—my mom’s tips from the casino—hidden in the piano, coloring from my Sesame Street coloring book and oddly adoring the click of the crayon making contact with the paper, my blonde curls bouncing as I ran away from Spiderman on Halloween one year, the plaid green couch in my dad’s apartment that was used strictly for watching The Little Mermaid while eating Hamburger Helper.

I absolutely hated when I woke up and my hair was poofy and parted to the side, for it looked like Ariel’s hair from The Little Mermaid, and I didn’t like that—I wanted my blonde curls perfectly parted down the middle. I never understood why the back door of my mom’s house had the little door for dogs because we didn’t have a dog. I kept spare clothes at my grandparents’ house for spontaneous sleepovers, but more importantly, for the nights where my mom worked too late.

For the first four years of my life, I spent weekdays at my mom’s house—our little home with creaky wooden stairs leading to the small and unfurnished basement, a back door with a little door for dogs, a large grandfather clock, and a white room with glow-in-the-dark stars on the popcorn ceiling.

On the nights where she was working late, which was more often than not, I spent my time at my grandparent’s house—which resided on an alley, housed fish in a pond built from the ground up by my papa, and had a wooden chest filled with plastic princess shoes, games, and my coloring books.

On the weekends, I went to my dad’s apartment in Schaumburg—a small space with a plaid couch, a coffee table with too-sharp corners, a cabinet full of pacifiers, and a recycling bin crowded with empty Hamburger Helper boxes.

The brushstrokes of minuscule moments make up the murky mosaic—my childhood—that my mind paints a picture of.

In the chaos of now, I often forget about where I started—where I grew up. How I grew up. It comes to me in waves, the colorful unconventionality of it all: the three homes I was raised in, the village that raised me, the cash in the piano and the dog door and the glow-in-the-dark stars and the pond and the green couch.

Whenever it rains, every bit of life seems to slow, and the mosaic in my mind richens in color.

And whenever it rains, I’m reminded of a back-porch conversation I had with my papa when I was really, really young. A conversation that I still think of so vividly so many years later.

It was storming late one night, and I was absolutely terrified of storms (and kids in Spiderman costumes). The thunder was thick, each boom blanketing on top of the other, and the jagged streaks of lightning made their own firework show.

My papa first carried me to the back door, an almost front-seat to the storm, to show me that it was okay. That thunder was just noise, and lightning was just light. That the storm couldn’t catch me in his arms, for he was holding on too tight.

When he wasn’t quite convinced that he hadn’t extinguished the fear all the way, he brought me outside on the concrete stairs under the awning of the house, overlooking the bare tree that has been alive longer than me. Enveloped by the noise and the light of the storm, my papa positioned me on his hip and told me to count.

Count the seconds between the lightning strikes.

There we stood, a focused curly-haired girl and a gentle man overlooking a storm, muttering “Mississippi.” He told me that if I counted the seconds between lightning strikes, it would tell me how many miles away the storm was. As the number grew, I felt safer; my fears eased as the storm inched away.

No longer terrified of storms, but of the other booming parts of life, I count. Whenever it rains, those blissful moments of dreamy sluggishness, when the mosaic richens, I am reminded of where I started—the unconventional first four years of my life.

I’ll forever count the seconds between lightning strikes: an ode to the murky mosaic of my childhood.