The Electric Cheetah: a fitting name for a confusing restaurant 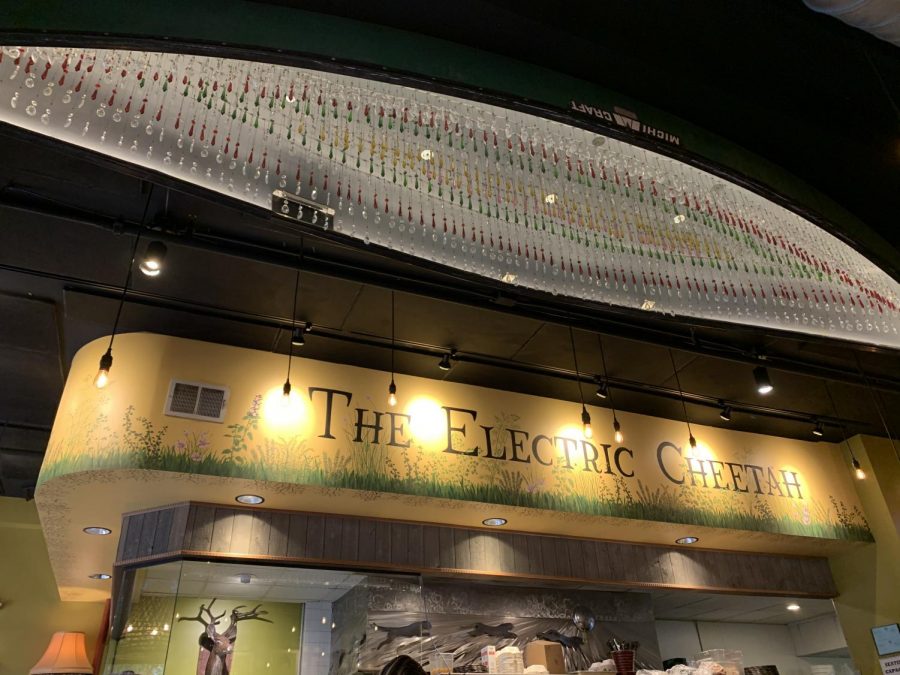 Bumpy cobblestone streets, surrounded by trendy health food stores and chic boutiques, guided my grumbling stomach to its highly anticipated destination. A week of apprehension plus a 20-minute car ride caused a desire in the depths of my belly that were previously unknown.

Walking into The Electric Cheetah, I had high expectations; the restaurant’s colorful website ostensibly detailed a gamut of decadent appetizers, savory meals, and home-brewed root beer on tap. And even better? A separate menu specifically made for Sundays, when the hours of operation are set from 10 am to 4 pm.

The first thing to greet me as I made my way through the door was a large chalkboard menu on the wall; an extensive list of root beers—The Electric Cheetah’s pride and joy—was written there to immediately place thoughts of what was to come in my mind. Dreams of flavors like Kodiak, Cafe Cheetah, and Mayor Goldie Wilson danced through my head, tingling on my tongue.

As the hostess jauntily led my companions and me to our table, we passed smiling, chewing mouths that happily devoured their meals. Scents drifted from their plates to my nose, taunting me into deeper hunger. The restaurant, rather small, was practically packed; a sign on the busy wall read that the max occupancy was 75 people, a number that felt close to being reached.

Although this restaurant is quaint, I have hopes that a new location—opening in Cascade by the end of 2019—will present a more spacious dining area.

Cups and plates were laid out onto the table where we sat. The fancily folded napkins starkly contrasted the casual, laid-back decor of The Electric Cheetah: a motley of bright paintings and random crafts. A canoe filled with colorful chandelier-like pieces of glass that hung above us caught my eye. This, mixed with an odd combination of jazz and pop playing through the speakers, set an unknown tone for the restaurant.

Although it took about ten minutes for an employee to approach us, the server was very helpful in recommending dishes and drinks, and after ordering Kodiak root beer, Mayor Goldie Wilson root beer, and Sarsaparilla, we were left carefully scanning our menus.

The list of meals on the menu lacked length, but what was lost in extensiveness was made up for in variety. Dishes ranged from sweet to savory and everything in between, resulting in an interesting, never-before-seen mix of flavors.

Due to the wild options, lots of brainpower was put into our orders: the Burgertime for my brother, A Mess of Biscuits for my dad, and the Electric Cheetah Macaroni and Cheese for me.

We sipped our drinks while we waited for our meals. The Kodiak root beer was not what I expected. From the moment it entered my mouth until hours after we left, the distinct yet nondescript flavor lingered on my tongue, tainting every sip and bite to pass my teeth. The feeling was unwelcome.

Finally, my hunger would be quelled: our food had arrived. A massive, steaming plate of macaroni and cheese was set in front of me. Curly noodles were coated in gooey—but not too gooey–and creamy—but not too creamy—cheese. Bread crumbs were sprinkled across the top, nestled next to chopped green onions. I was pleasantly surprised to find small, chewy chunks of sausage in my first bite; they offered a variation in texture to the dish.

The gigantic plate of noodles was more than successful in satisfying the grumbling of my stomach. I can truthfully say that, out of all of the mac and cheese I have eaten before, the Electric Cheetah Macaroni and Cheese ranks first.

My father and brother were in agreement with their satisfaction; we left the restaurant with full tummies and happy hearts. But my expectations weren’t completely fulfilled. I was confused by the art covering the walls and let down by the mediocre plethora of root beer.

The food was acceptable, but after all of the anticipation, the reality of The Electric Cheetah—like its root beer—fell flat.