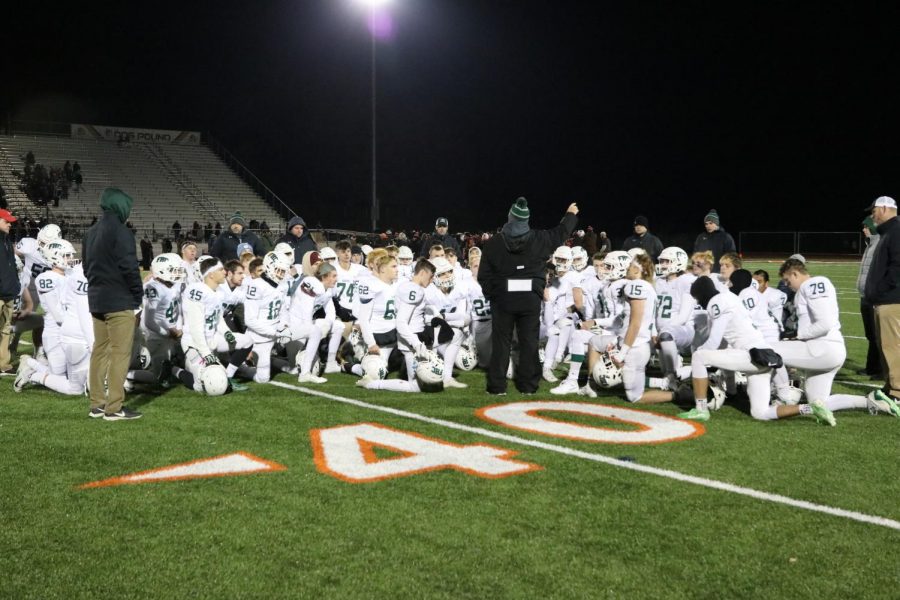 Friday night was a story of four very, very different quarters. Matching up against one of the best teams in the West Michigan area in Portage Northern, the Rangers let up zero points in the first and fourth quarters but gave up a combined 31 points between the second and third quarters.

“In the second and third quarters, [Portage Northern] just had more in the tank than us,” Carson said. “Their running backs presented speed and physicality, and you could see that at times, we were able to play hard and fast, which led to us stopping them.”

And that they did. For the entirety of the first quarter, both teams traded punts back and forth, and neither team could even get a glimpse of the endzone. The closest either team got to scoring for quite a while came on Portage Northern’s drive halfway into the first quarter, but pressure from senior Brandon Weiskopf on 3rd and 10 forced a Huskie punt from the FHC 47-yard line.

To start the second quarter, it was more of the same for both teams. Just as the Ranger defense looked potent as they forced stop after stop, so too did its Huskie counterpart. The FHC offense couldn’t get anything going, especially on the ground game. The dominant front seven of Portage Northern only gave up a total of 57 rushing yards over the entirety of the game, and that was really the deciding factor in Friday’s matchup. Portage Northern’s 210 yards on the ground dwarfed FHC’s total and made things very difficult.

“They are the biggest and best front we faced all year,” head coach Tim Rogers said. “We could not handle their personnel up front, and hey won the box, forcing us to throw more than we wanted.”

As much as the Huskies also couldn’t get points on the board, they started to move the ball downfield more once the second quarter began. On their second drive fo the quarter, the Huskies drove down quite easily until the reached the red zone. As it had been for almost the entirety of the 2019 season, the FHC red zone defense remained forceful, continuing to stop Portage Northern from scoring a touchdown. However, the Huskies still managed to add points on the board as Portage Northern’s Cam Adams knocked it through the uprights from 37 yards out with 3:50 to go in the first half.

Junior Evan Van Artsen—who has done a formidable job as a kick returner since senior Jackson Clay went down with an injury—brought the Rangers to their own 25 to start the next drive. Just 25 seconds later, a fumble from senior Jimmy Scholler now gave Portage Northern tremendous field position to close out the second half. The Huskies now had 3:20 to score from the FHC 24-yard line, and they did exactly that. After the FHC defense remained resilient, forcing the Huskies six yards back for a 4th and long, Huskie quarterback Nick Henegar aired one out to 5’6 receiver Kareem Williams, who leapt over sophomore Jacob Bonnett for the grab in the endzone. With this score, Portage Northern went into halftime leading the Rangers 10-0, with the game very much still within reach for FHC.

The third quarter is where things really began to blossom for one team and went downhill for the other. To start the second half, star wide receiver and safety Cory Cunningham—who stands at a whopping 6 foot 3—returned the kickoff 92 yards all the way to the endzone, effectively putting the game entirely in Portage Northern’s hands with the 17-0 lead.

A chaotic and damaging two minutes followed for FHC. On the first offensive play of the half for FHC, Jimmy threw an interception to the hands of Kareem Williams, the same player who made the impactful play just minutes earlier with his touchdown in the first half. The Huskies began to bring the tricks out of their playbook on the next drive, throwing three reverse passes before the ball ended up in quarterback Nick Henegar’s hands, who went downfield to Cory Cunningham for the 49-yard gain. Then, just over a minute later, Henegar once again found the hands of one of his receivers, this time for a 9-yard touchdown through the air. After coming into the second half only trailing by 10 points, the Rangers now found themselves facing a 24-0 deficit just two minutes into the second half.

“I made a coaching mistake by kicking to their skill players to start the second half, which cost us a touchdown and put us down 17-0,” Rogers said. “I don’t think it was what [our players] did as much as we just lost confidence going down 17-0, and the flood gates opened up.”

Following the chaotic two minutes, things began to slow down. Facing 4th and 6, Jimmy kept the ball and ran for the first down, one of his few big gains through the middle throughout the night. Unfortunately for FHC, on 4th and 1 from the Portage 15-yard line, the Rangers were stuffed.

“We definitely could have finished plays better,” Jimmy said. “They stopped us on two 4th downs, and I personally should have taken better care of the ball.”

After the turnover, star running back Anthony Tyus III found the end zone for the Huskies from seven yards out, bringing the Portage Northern lead to 31-0. The junior ran for a total of 174 yards on the Rangers on 20 carries, averaging a remarkable 8.7 yards per carry.

“Their running backs force you to be perfect on defense; if you don’t cover a gap or miss a tackle they will make you pay,” Rogers said. “Both kids were scholarship players, and they proved they are worthy.”

As much as the FHC offense struggled, the passing game for FHC stepped up with the absence of the ground game. Jimmy went 20/28 on the night, with 176 yards worth of completions. This included a 37-yard touchdown to junior Jonah Spates via Jimmy with 6:18 left in the game, bringing the Huskie lead down to 31-6.

With the final score ending in 31-6, it was a bitter ending to the season for the entire team, including Rogers.

“I am disappointed we didn’t play our best. That is not the team we have been the previous 10 weeks,” said Rogers when asked about Friday’s overall performance. “What got us to this point was discipline, teamwork and taking care of the football. I wish it could have ended better for our seniors.”

Despite the heartbreaking ending to the season, the Rangers completed a phenomenal season. The team went 8-3, with all three losses coming to playoff teams who were regarded as some of the best squads in West Michigan. Not many people had high expectations for this year’s team, but these boys proved them wrong.

“This team overachieved. With the graduation of many talented seniors last year, the expectations for this team were modest,” Rogers said. “Our success was a tribute to a great senior class and a group of selfless players who played as a team and didn’t worry about who got the credit. Hopefully, they will be an example for future teams.”