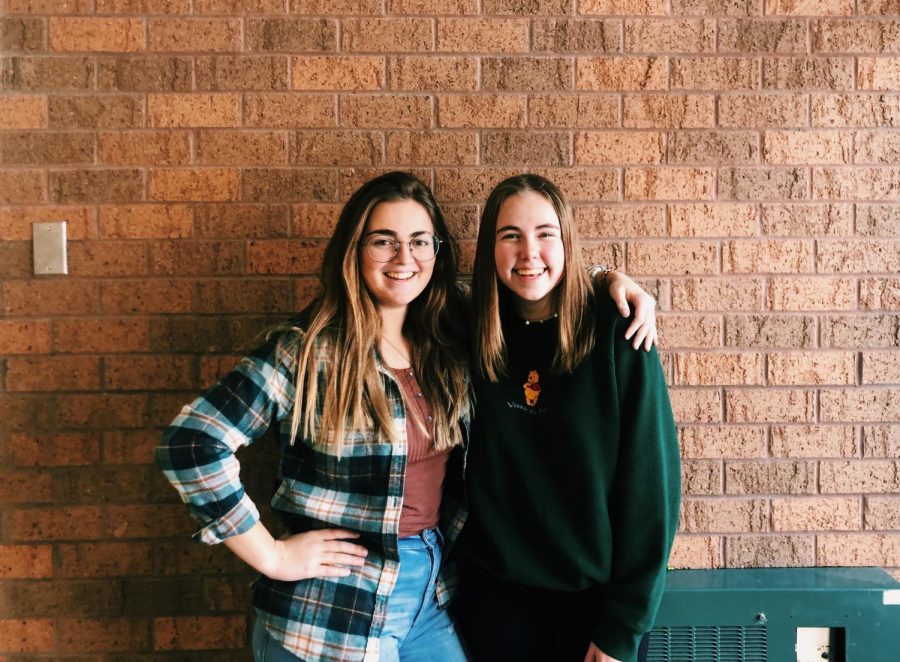 Sitting in Digital Media, a class offered by art teacher Tyler Fewell, senior Dana Kistler was focused more on the work at hand until prompted by a question: would anyone join a board game club?

Piquing her interest, she signed up, diving headfirst into a new idea—one completely new for the school—with no experience.

“[Fewell] started going around and asking people if [anyone] just [wanted] to join the tabletop club—tabletop board games,” Dana said. “I, of course, was like, ‘I’m not doing anything.’ And he’s like, ‘We need ambassadors.’ And I was like, ‘[senior] Elle [Ohlman and I] should be some ambassadors,’ and it was just really fun.”

From that moment on in class and forward, Dana found herself in the position of ambassador alongside Elle for this board game club simply by showing interest. In her own words, she’s the “face of the club” as it starts up. With two meetings down, the club—named Table Toppers—started off without a hitch.

While just an ambassador, Dana helps to direct Table Toppers with Elle and Fewell, creating a group dynamic in the club.

“I think it’s more of like a group [leading],” Dana said. “We all just get together, we play like certain parts, and we volunteer for like leadership and whatnot. But it [is] definitely Fewell that leads it. I kind of get the word out there I guess, and Elle does too.”

Fewell became the advisor and dubbed “leader” of this game-based club when the school’s social worker brought it to his attention through an email. Following up with that email, Fewell organized the foundation of the club, polling his classes.

Eventually, and rather quickly, Fewell found people like Dana who were interested in the club and brought to life Table Toppers, an after-school club that meets every Thursday in the art room. Focusing completely on board games, the hour contains a myriad of things to do as long as the attendees bring their own games. The hour-long meeting is just stress-free, something Fewell believes makes the club what it is.

“I would say it is different in that it is definitely more like fun and entertainment based, I guess,” Fewell said. “So I think for the most part most of the other clubs are something that I think people join to serve or to learn more about a subject they’re already learning about in school or to put something on their, you know, college applications or something like that. [The Table Toppers club] is kind of exclusively just to have fun; it’s to play board games.”

This simplicity in just board games helps Table Toppers to stand out among the extensive collection of clubs at FHC. There’s no special skill needed unless you know a Connect Four trick or hobby required to participate in this club. As Fewell puts it, “Just show up with a board game, come out, play, and hang out,” making the fun available to anyone interested.

And within the seemingly endless stream of homework and studying students deal with, they have the opportunity to sit down and enjoy themselves for an hour in a stress-free, all-vibes zone, something that everyone needs, and Fewell recognizes that.

“I hope that most of [the people attending], you know, are able to find that [stress-free] space on their own outside of school,” Fewell said, “but I definitely think it’s important for everybody to have that [fun space], high school or otherwise. So, I mean, if it’s something that we can kind of formally help sort of provide an environment for, you know, in the school building, then yeah, more power to us.”

After two of these meetings, two times for students to just have fun, Fewell and the ambassadors noticed a demand for Dungeons and Dragons, a fantasy and role play-based game, and formed groups of students in order to play the game. This game allows players to create characters and continue down the interactive journey D&D aims for.

Games like D&D played during Table Toppers bring together the players—students at their core—despite friend group or grade differences. As D&D has had a strong influence on the club, it allows for people like Dana to leave the busy school world and enter “new scenarios” outside of themselves, something only a board game could offer.

“It’s just cool to go out from normal reality and go into something completely different—something that you can imagine,” said Dana, whose character in D&D is a high elf Paladin named Lice. “Maybe it’s new, and it’s just really cool to imagine new scenarios and be a different person than you are really. It [is] just cool.”

With D&D being one of the main sources to draw students in alongside games like Monopoly, Uno, and Clue, the ambassadors—Dana and Elle—didn’t expect people to flock to the club. Yet, proving the power of a stress-free club, they were left shocked.

“How many people that signed up and actually came in and are coming consecutively to the meetings [is surprising],” Elle said, who also helped with starting the club. “We didn’t think it was going to be that big, but then we walked in, and there were a lot of people there, so that’s really cool. We thought it was like our friend group, and then we walked in, and there was like fifteen other people there.”

With this mosaic of new people from different grades, the Table Toppers club acts as a tool to bring them together through a simple medium: games.

These games put stress, tests, and homework on the backburner in the best possible way and allow students to enjoy time at the school. Although the 30+ attendees at the beginning was surprising to Elle, there is still a sense of community and happiness.

“I think it’s a lot of fun,” Elle said. “It’s a very relaxed atmosphere. Everybody’s just happy to be there and share their ideas for the club. [It’s] a lot of fun.”

And hoping to provide that happiness to more students, the Table Toppers club allows people to join with each meeting. No stress, no requirements, students just have to want to have fun; it’s that simple.

“You don’t have to have any prior experience or really anything,” Fewell said, “There’s just a willingness and interest in playing board games.”